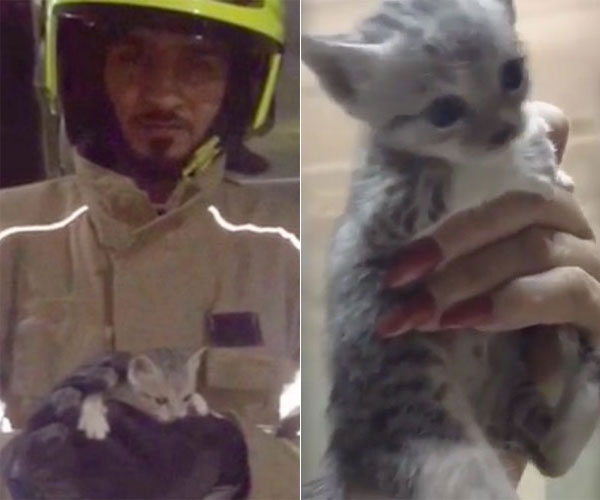 This will give you all the warm fuzzies…

The guys at Dubai Civil Defence are officially our heroes.

A video shared by Yanni Animal Welfare Dubai reveals how the team carried out an incredible rescue mission over the weekend – involving one extremely adorable, yet rather clumsy kitten.

As the video shows, the kitten somehow managed to fall behind a three-metre wall in Dubai Marina, becoming lodged in the gap.

Read more:
Sheikh Hamdan: The UAE’s Favourite Animal Whisperer
Where To Adopt Dogs In The UAE

After receiving the call for help, Dubai Civil Defence arrived on the scene 15 minutes later – where they were met by the kitten’s worried mother.

Clad in high-vis gear and safety helmets, the team immediately got to work, figuring out how to free the stuck kitten without damaging the building.

Twenty minutes later, their job was done. A rescue worker emerged victorious with the slightly bedraggled but otherwise unharmed kitten safe in his clutches.

It’s not the first time a kitten in the UAE has found itself at the centre of a dramatic rescue operation. Earlier this year, Abu Dhabi Civil Defence was applauded for saving a kitten from a busy highway.

The team joined forces with Abu Dhabi Traffic Police to block the highway and carry the kitten to safety.