A woman smokes waterpipe (Shisha) at a cafe in Dubai on May 31, 2008. The Gulf emirate of Dubai banned the sale of tobacco to anyone under the age of 20 with immediate effect and barred young people from public areas in which smoking is allowed. The announcement was made in public advertisements in Arabic-language newspapers as part of a "Youth Without Tobacco" campaign. The campaign was launched to coincide with World No Tobacco Day on May 31. AFP PHOTO/MARWAN NAAMANI (Photo credit should read MARWAN NAAMANI/AFP/Getty Images)
UP Next
X
How To Treat Pregnacy Acne
Alexandria Gouveia
March 22 2016

According to research carried out by the World Health Organisation (WHO), smoking shisha, or even inhaling the smoke in an hour session, is the equivalent of smoking between 100 and 200 cigarettes. It is this shocking fact that has seen Dubai Municipality ban pregnant women and children from shisha cafes.

Puffing away in ‘hookah cafes’ is a popular pastime in the region, but pregnant women are now being told to steer clear of any venue, regardless if they want to smoke or not.

Related Story: 7 Things You Need To Know About Childhood Cancer

The ban comes part of a new public-service health campaign launched by Dubai Municipality, regarding the usage of tobacco.

“This is not up for negotiation,” Marwan Al Mohammed, Director of the Public Health and Safety Department at Dubai Municipality said to Gulf News. “The rules are not limited to pregnant women, but also extends to children and toddlers. The reason behind launching the campaign was to make it absolutely clear who are, and who are not, allowed in the premises.”

Related Story: How To Quit Smoking

The municipality also launched the campaign on Facebook with the below image and the following statement: “The Public Health & Safety Department initiates a public service campaign to warn children & pregnant women from entering cafes with creative messages hung on all the cafes’ doors in Dubai. The messages will be addressed by the fetus or children & aimed towards the parents… ‘smoking is your choice… not mine’.” 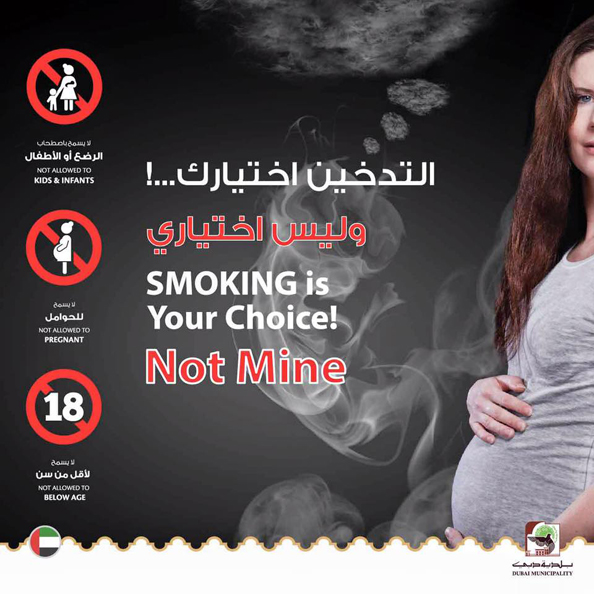 All shisha cafes must now publish warnings on their premises. Failure to do so could see them shut down. Al Mohammed has revealed that 15 cafes have already been shut down for not adhering to regulations.

If you think the new rules are too strict perhaps the below facts about the dangers of smoking (including second-hand smoking) can have on your baby will change your mind:

Related Story: Dhs50,000 worth Of Healthcare Advice For Free