The Drop In Dubai Rent And The Real Price Of Living If you rent in Dubai, you may be in luck. Rent prices have begun to drop this year, and it seems set to continue that way.

The first quarter of 2016 saw rent in Dubai drop by around 2.7 per cent, with real estate experts saying that it’ll drop a further 3 to 5 percent this year – roughly 7 per cent overall. Finally!

Unlike in other crashes where high-end areas were generally unaffected by price drops, this time the decrease will be across all regions. In premium hot spots such as Downtown and the Dubai Marina, rent prices are due to drop 7 per cent, which would mean a drop in nearly 10 per cent overall by the end of 2016.

The data comes from a report by real estate experts Cluttons, who stated that “an immediate recovery in [rental] values appears unlikely”. 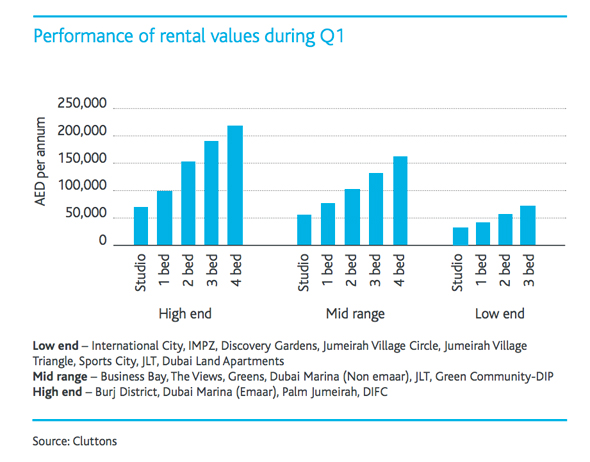 Here’s a guide to rental prices in Dubai

If you’re wondering what’s causing the drop in rents though – it’s Dubai’s weakening economy. With fewer senior level jobs, as well as spots in the banking and finance sectors, demand for apartments and villas has been lowered.  The report by Cluttons states: “Weakness in the jobs market tops our list of concerns”.

While Cluttons believe the Dubai Expo 2020 is “likely to impact the rate of job creation, which will have positive ramifications for both the sales and rental markets in the city,” they don’t think this will come into effect until 2018.

Read: Salary Gap Between Nationalities In The GCC Revealed

However, while rent prices might be dropping the cost for DEWA isn’t, which isn’t good news for those that live in villas.

According to a report by movesouq.com it costs up to Dhs100,000 per year to maintain a home in Dubai, which is 2 to 3 per cent of the value of the home.  These maintenance costs include cleaning, AC servicing, plumbing, insurance, utilities and more.

Read: Job Satisfaction At An Overwhelming High In The UAE

Here’s an infographic created by MoveSouq detailing roughly where the money goes each month and on what:

Of course this vast increase doesn’t apply to everyone, you might not have a garden, and you might not have a maid or pets. The point is that there are costs you may have overlooked when sizing up your next rental. so take advantage of the rental drop and don’t waste it on unneeded maintenance.