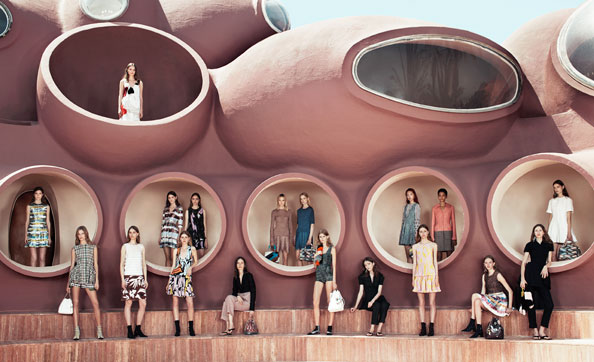 It was a stylish A-list fest last night as Raf Simons drew in a host of celebrities to Cannes where he showcased his Dior Cruise collection.

Dakota Fanning, Zoe Kravitz, and French beauty Marion Cotillard were among the many stars and style elite that came out for Dior’s 2016 Cruise show held in the South of France, with the stunning French Riviera as a backdrop.

Fashion designer Raf Simons initially wanted to reveal his new collection in LA, yet with the stars hot-footing it to Cannes for its international film festival he made a last minute decision to move the event to the famous Bubble Palace, aka Pierre Cardin’s iconic Palais Bulles, which is so impressive in design it almost competed with his collection, almost.

Following on from Louis Vuitton’s showcase at the Bob Hope residence in Palm Springs and Chanel’s undertaking at Seoul’s Dongdaemun Design Plaza, the designer’s decision to relocate was in keeping with the current trend to marry fashion with highbrow architecture.

Gaining inspiration from the colours, textures and light of  the natural world of the Cote d’Azur, together with the style of the people who have inhabited it, the designer drew on tradition and technique. In doing so the Bubble Palace became a metaphor for the approach to the overall collection.

“I wanted an idea of freedom, playfulness and individuality to come to the fore in this collection, especially in consideration of the Dior archive,” said Raf Simons. “It is not a heavy concept; it is light and young and there is a literal lightening of this clothing to make it fresh. Much of the design architecture comes from Mr Dior’s manteaux, his coats. But the heavy fabric is stripped away, the scale is played with and elements of their style are ‘collaged’ into other forms and garments.”

The Dior Cruise collection included utilitarian designs contrasted against those of traditional elegance, where a confluence of styles, patterns, textures and techniques evoked the multi-layered world of the South of France. Monochrome reigned supreme as the colour palatte of choice while the metallic print and miniature check also proved to be on-trend. Vibrant patterns were a nod to  “the artists Picasso, and Matisse”.

Actress Dakota Fanning who was wearing Dior to the show that ended with an elaborate fireworks display said of the collection: “I liked the short flouncy dresses and skirts. I always look at things that are short because I’m a shorter girl and I can’t wear the things those really tall girls wear.” She said of the stunning location: “It’s amazing. It’s so great to be in this location. It’s really kind of crazy. It’s really cool to be here.”

Weren’t there? Fear not, we reveal all in our gallery.