Here’s our edited roundup of the news stories you need to know about this week – the what, who, where, why and the whens…

It was only three months ago that they very publicly announced their decision to consciously uncouple, however fresh reports claim Chris Martin and Gwyneth Paltrow are putting their divorce plans on hold in a last ditch attempt to save their 10-year marriage.

According to close sources Paltrow’s strict ground rules, after the break up, actually gave the couple some time to reflect on their relationship.

A friend told the Daily Mail: “Gwyneth had ground rules about not ­immediately dating, respecting each other, keeping things happy for their two children and communicating throughout but it seems to have acted as a wake-up call. Chris still lives with her, they are amazingly lovey-dovey together and she still wears her wedding ring. They may have consciously ­uncoupled a few months ago – but they seem to be recoupling now. No one will be surprised if they get back together.”

However, fans of the star couple shouldn’t get too excited with the actress’ rep quashing the ‘make up’ rumours, allegedly saying: “You will many times see them together as they are raising two children [daughter Apple, 10 and son, Moses, eight]. I don’t know why that is surprising since they were very clear when they announced their break up that they were still very much a family just not a couple. Don’t make a story where there is none.”

FIFA bosses were warned that the lives of fans, spectators and players would be at risk if they gave the 2022 World Cup to Qatar.

Out of the nine countries bidding for the tournament, Qatar was the only country with a “high risk”. The threats were established in a document written by Andre Pruis, the South African police chief in charge of security.

“The terrorism threat against Qatar relates to its location… its proximity to countries with inter alia (among other issues) an al-Qaeda presence,” read the brief obtained by The Sunday Times. “In view of the risks related to the centralised approach, Qatar is allocated a risk rating of high. I am of the view that it would be very difficult to deal with a major incident in such an environment without having to cancel the event.”

The latest news isn’t great for Qatar, who despite winning the bid for the 2022 World Cup has since been hit by rumours of bribery. A revote is now potentially on the cards.

BARACK OBAMA PUTS HIS FOOT DOWN WITH IRAQ

US President Barack Obama is said to be considering all options after up to 500,000 people fled the city of Mosul, Iraq when Islamic extremist group ISIS took over.

Obama claims he has his national security team working “round the clock” on “options” after Iraqi Prime Minister, Nouri Maliki, asked parliament to declare a state of emergency and grant him greater powers.

Obama responded: ”The US is not simply going to involve itself in a military action in the absence of a political plan by the Iraqis.”

Though he hasn’t ruled out sending in help he did refuse to deploy US troops, stressing the importance for the Iraqi government to reform itself to deal with the root of the causes of ISIS’ success.

At the time of his is first election more than a decade ago, Obama called the war in Iraq, “dumb” and yet it continues to haunt him. Sources claim he is frustrated at the billions spent to build up Iraq’s military only for it to crumble down by the smaller force of the extremists.

Hollywood actress Angelina Jolie has been given an honorary award by Queen Elizabeth II for the her campaign against sexual violence.

The actress has been praised her putting her celebrity to good use – Jolie has worked as a special envoy for the UN High Commissioner for Refugees since 2001, and regularly visits refugee camps around the world.

Jolie said about her award: “To receive an honour related to foreign policy means a great deal to me, as it is what I wish to dedicate my working life to. Working on PVSI and with survivors of rape is an honour in itself. I know that succeeding in our goals will take a lifetime, and I am dedicated to it for all of mine.”

The first ‘Original American Idol’ winner Kelly Clarkson is said to be on “cloud nine” after giving birth to a baby girl.

The American singer announced the arrival of River Rose over Twitter. The baby is the first child for Clarkson and her husband Brandon Blackstock who wed last autumn. However, this is Blackstock’s third child – he has two babies from a previous marriage.

The Duchess of Cambridge’s younger sister, Pippa Middleton, has set off on a 3,000 mile charity bike ride across the USA as part of the Race Across America Challenge.

Pippa joins a team of seven, including her brother James, on the charity race in aid of the Michael Matthews Foundation, an educational charity established following Michael’s death while descending from the summit of Mount Everest.

Ultra-fit Pippa, who is renowned for taking party in charity sporting events said of her latest challenge: “I think every cyclist including me will be layering it on. Once we get going it’s non-stop, with very little sleep. It’s nerve-racking but exciting and all for a great cause.”

The enduring course is said to cost US$20,000 to participate and will see the cyclists climb more than 100,000 vertical feet. 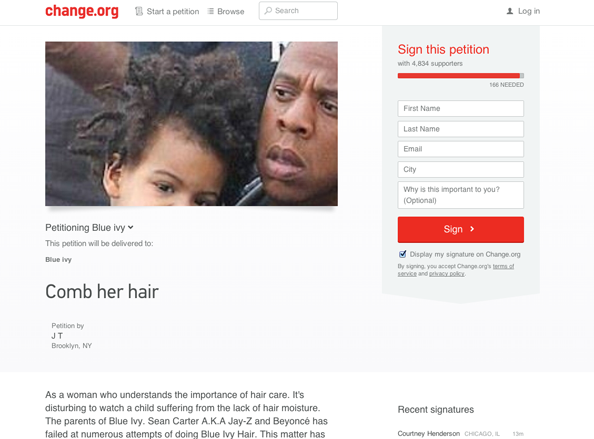 It hasn’t been a good few weeks for mega-stars Beyonce and Jay Z. First there was that lift incident with Solange, then there’s rumours of affairs and an impending divorce and now it seems their parenting skills have come into question.

A petition on change.org, started by a woman named Jasmine Toliver, calls upon the celebrity parents to take better care of daughter Blue Ivy’s hair. The petition reads: “As a woman who understands the importance of hair care, it’s disturbing to watch a child suffering from the lack of hair moisture.

“The parents of Blue Ivy, Sean Carter aka Jay Z and Beyonce have failed at numerous attempts of doing Blue Ivy’s hair. This matter has escalated to the child developing matted dreads and lint balls. Please let’s get the word out to properly care for Blue Ivy hair.”

Surprisingly, the petition already has 4,834 supporters. One petition signer said: “’I hate when a mother looks like a million dollars with their hair all done and the child looks like they haven’t seen a comb since they were born.”

While a fan of the couple retorted: ‘This is the dumbest thing I have seen in my life. You have no right to assume that you are the authority on anyone’s hair, you judgmental females, that is her child. Not yours!”