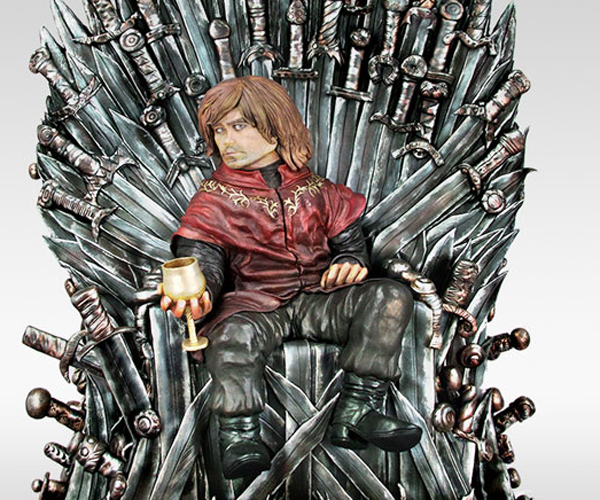 This four-foot Tyrion Lannister, cast in fondant form, would certainly make a Feast for Crows.

A Lannister always pays his debts – but you’ll be incurring some of your own if you fancy a slice of this particular pie.

One Dubai bakery has crafted an epic four-foot sponge and icing creation to celebrate the upcoming launch of Game of Thrones‘ season seven, and it comes with quite a price tag.

The Broadway Bakery’s replica of the majestic Iron Throne, complete with a very lifelike Tyrion Lannister in situ, rings in at a whopping Dhs100,000.

Read:
This Determined Artist Used His Mouth To Paint A Beautiful Portrait Of Sheikh Mohammed
Six American Brands You Didn’t Realise Shipped To The UAE

However you do get quite a lot of bite for your buck, with the 32-kilogram concoction able to feed 120 mouths.

The bakery – which claims this is Dubai’s most expensive cake – took three weeks to craft the design using fondant and sugar paste.

It even shared a behind-the-scenes video to show how it was made (spoiler: this is definitely not a DIY jobbie):

“This four-foot high cake is a majestic tribute to the legendary Tyrion Lannister – the rightful King of the Seven Kingdoms,” the bakery wrote on Facebook (and we don’t disagree).

“Our team didn’t miss any of the small details either.”

Read:
Zuhair Murad’s New Collection Looks Like Something Straight Out Of A Fairytale
Bookmark This: Here Are Dubai’s Best Salons & Hair Stylists

And they’re not lying – from the goblet rarely seen out of his hand to his distinctive scar and stubble, the candied Hand of Queen is spot on.

If you fancy ordering one for the hit TV series’ season premiere, you can do so here (you even get to pick your own flavour).

Or hey, it doesn’t have to be bought for GoT – this could make an epic birthday present. We probably wouldn’t make it your wedding cake though… the Lannisters aren’t known for putting on cheery festivities at those.