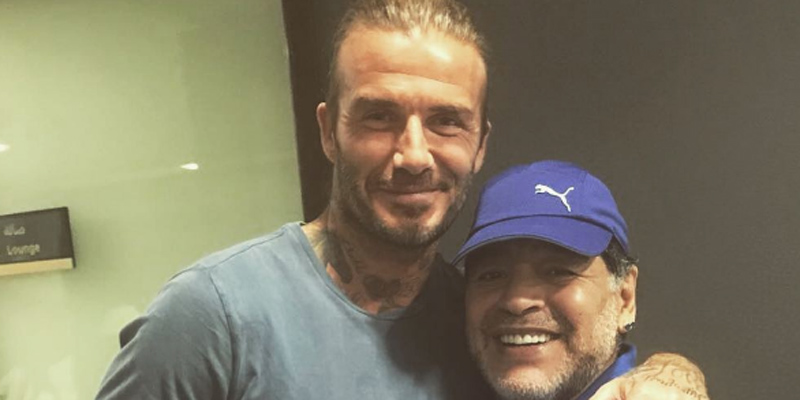 A spot of charity work and catching up with a fellow football legend? Colour us impressed.

UK football star, philanthropist, and half of one of our favourite celebrity couples, David Beckham has been in Dubai this week, and he looks to have been having a great time.

The father-of-three flew in for an event with Unicef at Level Kids in City Walk to mark a partnership between the charity and the store.

Beckham, who’s worked with Unicef for more than 10 years, spoke to the assembled crowd.

We believe that every child has the right to a brighter tomorrow. At Level Kids, we want to give hope to children in need. That’s why we have partnered with UNICEF to reach some of the world’s most vulnerable children in the areas of Education, Health and Nutrition. Join us today and support @UNICEF by donating in store and soon online. Together we can help build #abrightertomorrow #levelkids #unicef #mydubai

A commendable move (and one we’d encourage you to get behind – you can donate to Unicef here), but it wasn’t the only thing Beckham got up to here in the city. He also spent some quality time with Argentine football hero Diego Maradona. The retired player lives in the UAE and manages Al-Fujairah SC.

Beckham was clearly delighted, sharing a photo of the pair on Instagram and captioning it “Big hug from the best.”

Big hug from the best @_diegomaradona_10

For his part, Maradona was also pleased, sharing two photos of himself with Beckham. Our high school Spanish is a little rusty, but we’re pretty sure that caption says that Beckham is a true gentleman.

We’re sure it’s not just us feeling a little bit of pride that this meeting took place here in Dubai. Nice one, guys.

This isn’t Becks’ first visit to the UAE – he popped into Mall of the Emirates last year – and we’re hoping he decides to visit again soon.