Crown Prince Hussein: ‘It feels like the world’s conscience is on silent mode’ 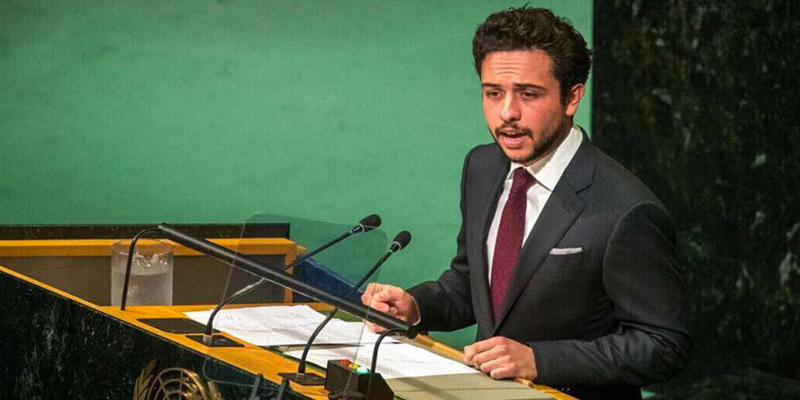 The Jordanian royal gives a moving must-see address at the UN General Assembly.

The Jordanian heir took to the podium at the 72nd Session of the UN General Assembly on Thursday, and made a stirring speech about his homeland’s “integrity” in a tumultuous world.

“Throughout its history, Jordan has suffered external shock after external shock, but the last couple of decades have been relentless,” the 23-year-old told rapt attendees.

“I do not know of any other country in recent history that has gone through such an onslaught of crises and found itself surrounded by so many conflicts through no fault of its own.”

Drawing attention to Jordan’s 1.3 million Syrian inhabitants, the royal – who only graduated from the US’ Georgetown University last year – told delegates that “Jordan, today, is one of the largest hosts of refugees in the world”.

“We have done the right thing, over and over again, because that is what real integrity means, but how has the world reacted?” he asked.

“No doubt, Jordan is regularly praised for its humanitarian and moral stance, and we are proud of our country’s reputation, but kind words don’t balance budgets, build schools or bolster employment.”

Yet the strain of such humanitarian work has been immense, the Crown Prince revealed.

“The direct cost of the Syria crisis now consumes more than a quarter of our budget,” the royal said.

“Housing, food, energy, healthcare, education, jobs: all are under pressure. Yet in the face of these daunting challenges, we did not back down from our ideals, or our values.

“We did not turn our backs on people in need. We’re weighed down by massive debt, yet we stand tall and proud. Our soldiers dodge bullets to let refugees into our county, not keep them out.”

Read:
Queen Rania is on a total style roll this week…
Here’s just another reason why Crown Prince Hussein is the best big brother…

However the stance of some nations, Crown Prince Hussein said, has left the people of Jordan feeling baffled.

“How can it be, that a country like Jordan offers a humble home to millions of desperate people, while richer countries around the world quibble over accepting thousands?” he asked.

“The message to the youth of Jordan and our region is loud and clear: there is no shortage of money for fighting evil, but the appetite for rewarding virtue is nearly non-existent; that the voice of those who defend and build is drowned out by those who attack and destroy. It just doesn’t add up.”

إن الأمم المتحدة تمثل ضميرنا العالمي. ولكن، بالنسبة للكثيرين في بلدي ولغيرهم حول العالم الذين يحاولون أن يفعلوا الصواب، يبدو أن الضمير العالمي في “وضعية الصامت”. The United Nations is our global conscience, but for too many in my country, and others around the world trying to do good, it sometimes feels like the world’s conscience is on ‘silent’ mode. #UNGA

Calling the UN “our global conscience”, the royal put to delegates that for “too many in my country, and others around the world trying to do good, it sometimes feels like the world’s conscience is on ‘silent’ mode”.

“It’s time to break the silence and start finding answers. In doing so, we can unleash a global current that carries our common humanity to safer shores,” he urged.

This isn’t the first time the royal has made a mark at the international organisation either – just two years ago, at the age of 20, he became the youngest person ever to chair a UN Security Council Meeting.

Crown Prince Hussein, who holds the rank of first lieutenant in the Jordanian Armed Forces, looks to be moving into more public speaking since graduating from the UK’s prestigious Sandhurst Military Academy earlier this year.

We can’t wait to see what he does next…