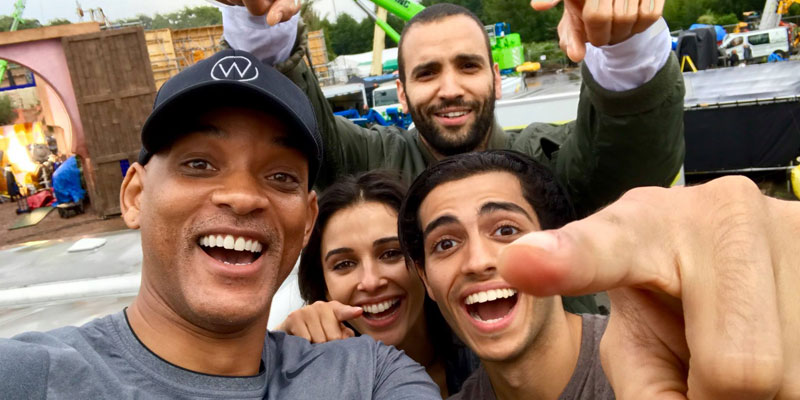 Production is underway, and we won’t dare close our eyes…

Aladdin remains one of our favourite-ever Disney movies, and we’ve been keenly anticipating the live action remake. Will Smith as the genie? We were already sold.

So when this photo came across our social feeds, we were delighted. Smith shared a selfie with Mena Moussad, who plays Aladdin, Naomi Scott, who plays Princess Jasmine, and Marwan Kenzari, who plays the baddie Jafar. Smith calls them a family, and they all look like they’re having a great time. The post has been shared nearly 17,000 times on Facebook, with 225,000 people reacting to it.

Aladdin Live hasn’t been free from controversy so far and the recently announced introduction of a new character, Prince Anders, played by Billy Magnussen, hasn’t done much to help. The 1992 original didn’t feature any white characters.

READ: Everything you need to know about the real-life Aladdin and Jasmine
The actor cast as Jafar wasn’t what we were expecting

The part of Princess Jasmine going to a British-Indian actress, rather than one from the Middle East, was also criticised. Disney said they were casting for actors of either Middle Eastern or Indian descent, however.

It was in that moment, as he looked into her eyes, that he saw a soul so beautfully captivating that he could not but help remember the vastness of the galaxies above. The stars that shined as bright as her two illuminating eyes. Find your inspiration. Use it to drive your passion. Go out and get it. #passion #drive #focus #poetry

To be fair, the film’s setting, Agrabah, is fictional, but it’s widely read as the Middle East. Some have said the film treats India and the Middle East as interchangeable, but others have praised its diverse casting. Kenzari, playing Jafar, is of Tunisian descent, and Moussad is Egyptian and Canadian.

After the success of Beauty and the Beast, which grossed over US$1 billion (Dhs3.67b) worldwide, Aladdin looks set to be a pretty big deal.