Why you need to book a holiday to Jordan, now

Ever wanted to explore an alien planet? Wadi Rum in Jordan is waiting to share its secrets with you

Surrounded by some particularly tenacious neighbours, Jordan has endured its share of fair-weather visitors, as its popularity with tourists rises and falls against the region’s political affairs. Hitting seven million tourists in 2010, that figure slid to two million in 2012 following the Arab Spring. Recovery has been slow but steady, inching back up to four million for 2017. The result: a destination that can be all yours, if you know where to go.

While Jordan covers an area that’s comparable to the Emirates – 89,342 square kilometres to our 83,660 – driving down the Amman-Aqaba highway, the space on either side of the road feels unusually vast. It may be the complete lack of a definable horizon where the road disappearing into a haze blurs the distinction between potholed asphalt and sky. Or it could be the promise of the desert ahead teasing you, with the occasional tiered formation giving a sneak peek of Wadi Rum. Containing 720 square kilometres of red sand, hidden caves, and sculpted rock formations, the Valley of the Moon is one of Jordan’s most significant tourist destinations. Despite its reputation as a travel hotspot, it’s clear on arrival at the uncrowded park entrance that you are unlikely to encounter a soul outside of your group. 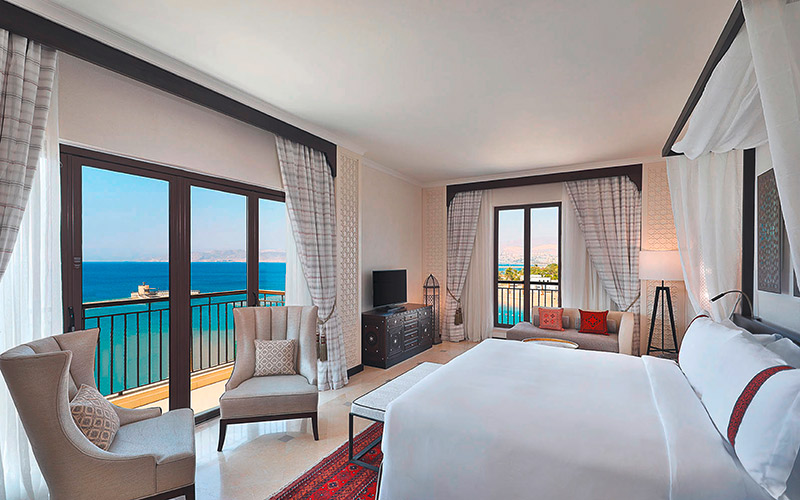 After the formalities of the visitor centre are over and dusk sets in, you pile into the back of a dusty open-roof Jeep, seemingly held together by a roll of duct tape and sheer willpower, and roll into Wadi Rum, following a looping invisible path known only to the driver. Arriving in a camping ground for those who don’t care for the intricacies of camping – doing away with the billycan hung over the fire, the hammered stakes, the flapping canvas and the sleeping bags – Memories Aicha Luxury Camp instead offers up a curious, almost ritualistic circle of semi-permanent en-suite rooms. Not quite glamping, the interiors of each take inspiration from Arabic kitsch, with wide ruffles and glitz fittings swamping the space.

After dinner, you wander out into the Wadi Rum desert, keeping the camp lights to your back, where the solitude is inescapable. A sensation of being completely, utterly alone is almost a comfort – just you, the stars and the night. The silence is clear and vibrates right through you, reverberating from the sands up through the soles of your feet and stretching up through every single muscle, each individual tendon. A full body factory reset. Above, the sky is both an endless void and a heavy weight, smothering every sound with its absolute clarity, and swallowing your body whole with a quiet ferocity. Here, in the dark, you are by yourself, aside from a series of sharp whistles that the inky blackness allows through. That’s the jinn, your guide tells you matter-of-factly, the following morning. They want to lure the listener into the night. 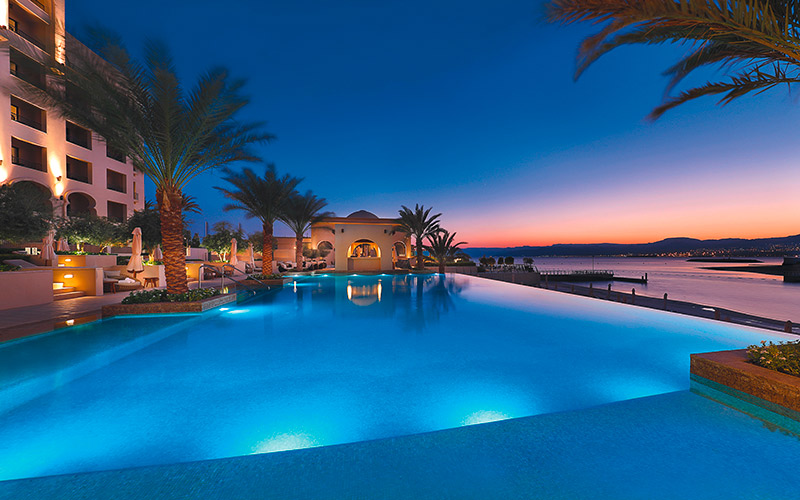 At first light, the campsite and the expanse of desert opens up to you for a full reveal. Having arrived last night after nightfall, and guided only by hand lanterns, you were unaware of your surrounds until that first eye-widening double take through the ‘tent’ opening. While the next leg of the space age involves our descent to the surface of Mars, the alien landscape is already present here on Earth. Beautifully bleak, the gentle yellow dunes you drove through on the highway are now completely replaced with brick-red grains. To one side, the rosy sand stretches out into the far distance. Behind you, the basin’s edge gathers and rises into a natural curved wall. Carved from red rock, each ombre layer marks a change of landscape and the majority of mineral deposits – sandstone, silica, granite – are in a permanent record. Out front, a UFO has been grounded. An oversized white dome that seems immune to the encircling red sand – my Stan Smiths already stained a ruddy pink – the camp’s restaurant and meeting spot is almost as extra-terrestrial as its lunar environment. Despite the sci-fi vibes, disconnecting is less of a choice, and more of an enforcement in the desert. While the campsite claims a WiFi connection, it’s tenacious and unsure, almost as if the thick blanket of stars above has also muffled the signal, their light forcibly out-shining the social media shout and crammed inboxes. And while a reprise from scrolling is welcome, it is at first discombobulating to adjust to, and you will catch yourself aimlessly reaching for your phone as a matter of reflex rather than need. 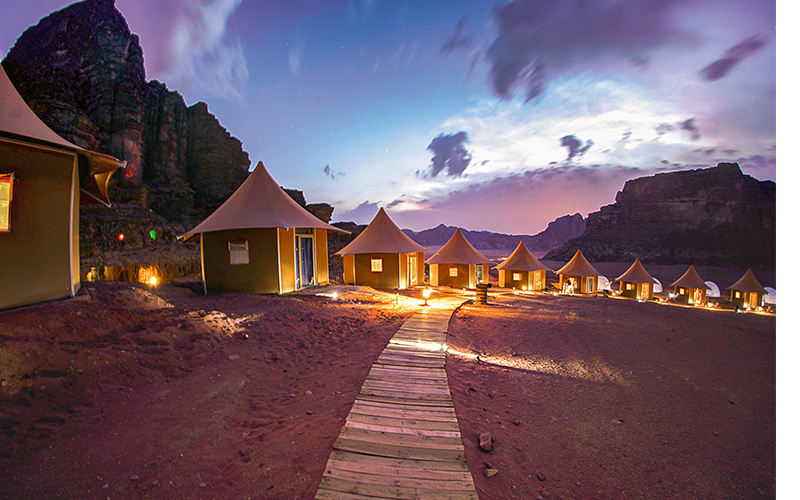 Leaving the campsite, you squint your eyes to watch the rock formations dwindle into the background. Heading to Aqaba, a new structure takes shape ahead, again tinted pink, courtesy of the reflecting glow from the mountains you’ve just left. Fixated on becoming a resort city, the “Riviera of the Middle East” as the hotel manager extols, the city has welcomed developments alongside its marina. Al Manara, a Luxury Collection Hotel, Saraya Aqaba is a tentative tip-toe into the waters, the five-star and 207 keys hotel being the first of a cluster of luxury properties to open. Those accustomed to the Emirates’ style of gilded receptions and modern Arabic fit-outs will feel an instant familiarity with Al Manara – each of the hotel’s spaces are not dissimilar to those that line the Palm and foreshores. Local touches, however, humanise the suites and shared areas in the form of mother-of-pearl detailing and hand-woven throws, offering relief from glossy excess.

Emerging from its soft launch stage, Al Manara hits all the key points for guests who do demand a high level of luxury service. Staff manage the sweet spot between discreet and vivacious, while the in-house Arabian restaurant, Kubba Levantin, delivers modern Levantine with thoughtful flair, and the R&R facilities are both a pleasure to look at and to use. The generous outdoors terraces, meanwhile, caters for those who measure their travels in landscapes. Here, the sunsets are glorious in shades of boiled sweets magenta, fuchsia and tangerine, complete with a mirror-like Red Sea and palm tree silhouettes. Nightfall maintains an off-duty vibe – fairy lights twinkle overhead – a perfect send-out for your eventual retreat to your crisply turned-down bed. It’s a different and safer form of alone, this time.