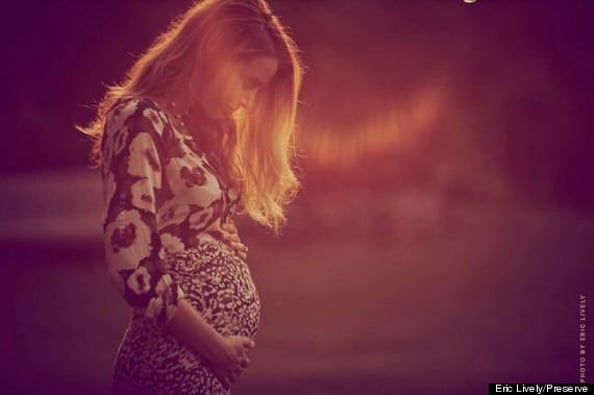 All together now: awwww. Blake Lively, she of perfectly waved hair and killer wardrobe fame, has revealed that she and her Hollywood hunk of a husband Ryan Reynolds are going to be parents!

Adding to the current celebrity babyboom, which recently saw Ryan’s ex-wife Scarlett Johansson  as well as A-list couple Eva Mendes and Ryan Gosling welcome baby girls into Tinseltown, Blake Lively initially put a teaser on her Instragam account, hinting at a mini Lively-Reynolds.  She later took a leaf from Gwyneth Paltrow’s book and made the announcement on her website Preserve.

The 27-year-old Gossip Girl star announced the good news, along with a beautiful picture of her cradling her blossoming baby bump, taken by her brother Eric. The announcement crashed the website, with thousands of Blake fans rushing to read the news for themselves. 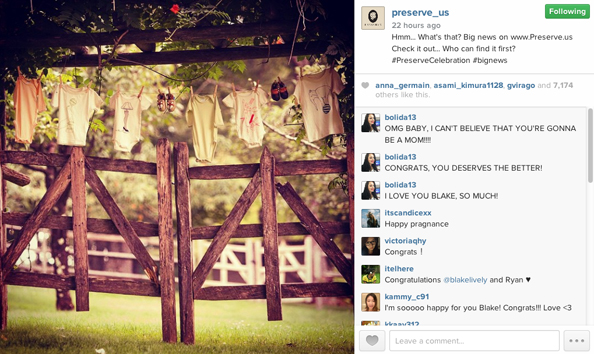 The photograph came within a post about “that special moment at the creation of family”, in which she congratulated fellow expectant mums. It’s a suitably heart-warming and sentimental post for the site, which Lively launched in July this year.  “Preserve at its core is about family. ‘Family’ is the single word our founder, Blake built this home on,” the accompanying post on Preserve told us, along with a confirmation that they will be dedicating the upcoming months to expectant mums and their newborns. “We have something for men, for women, for the old, but we realised, we don’t have anything for the new. With family on our mind, we looked to the origin of it all – to the women in our lives who are right there, at that special moment…”

In US Vogue’s August issue, Blake, who was the glam cover girl, spoke excitedly about how she felt husband Ryan would be as a daddy. She said: “He’s going to be a great father and leader and patriarch – he’s so meant to be all of those things. The fact that he lived so much before we got together, he’s the exact realised person that he should be. And so I get to share my life with the person he’s become, and we get to grow from there.”