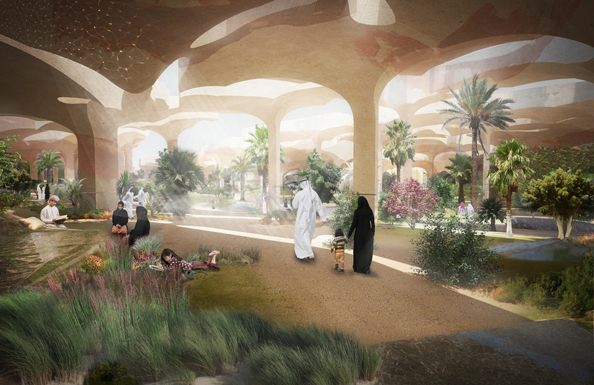 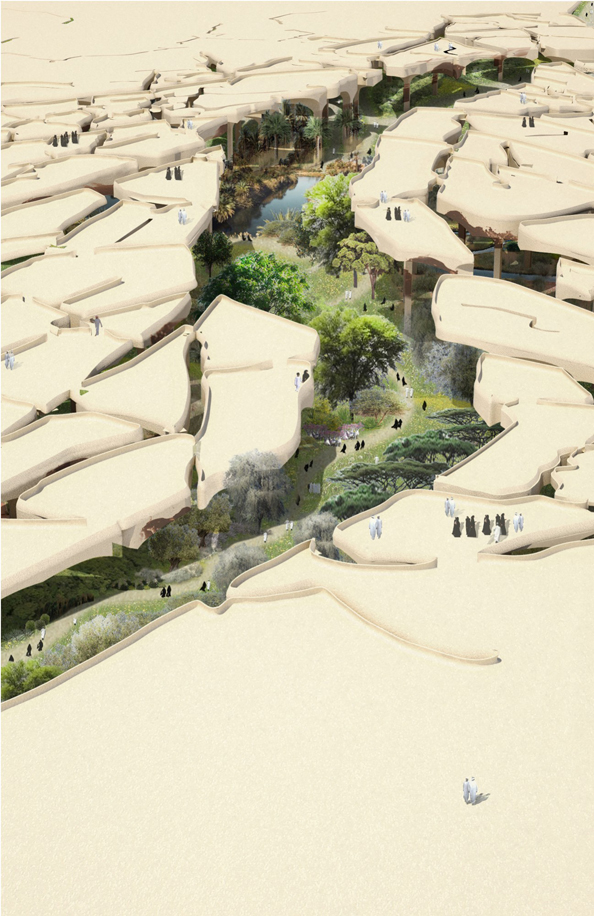 London-based Heatherwick Studios has revealed a literal ‘ground-breaking’ design for Al Fayah Park in Abu Dhabi. An existing park near Zayed Sports City will be redeveloped to create a lush, multi-use 125,000sqm oasis that will be shaded by 20m high architectural canopies mimicking a cracked earth desert landscape.

With the rapid expansion of the UAE’s major cities, Dubai and Abu Dhabi, it is clear that is there is a greater demand for multi-use public spaces. Dubai’s recent launch The Beach situated in JBR is a perfect example of this new thinking around urban public space. However, due to the high summer temperatures and dependence on desalinated water, creating green spaces in the UAE has always been a costly, inefficient use of energy and, as such, limited to small private gardens or selected public green ‘lungs’ like Al Safa Park.

Heatherwick Studio posed the question, ‘Can you make a park out of the desert?’ The major challenge was to stop thinking about parks in a European context and to think more about the challenge of the desert environment. They needed to create a space that offered protection from the sun for both visitors and plants, while being energy efficient and sustainable. They took their inspiration from the desert landscape itself as well as early desert-dwellers who grew plants in the shade of palm trees.

As the Studio explains: “The project evolved as a series of cracked pieces of the desert surface raised on columns to form a gentle dome across the site. These elevated pieces create a perforated canopy of partial shade under which a lush garden can grow, protected from the harsh excesses of the hot desert sun. This sunken oasis becomes a landscape of plants and mature trees, forming a series of interconnected public recreational spaces.’

The park will include spaces for picnics, festivals and have facilities such as a mosque, cafés, play spaces, a library, exercise tracks and community vegetable gardens.

Heatherwick Studios, founded by celebrated British architect Thomas Heatherwick, is perhaps best known for their recent medium scale projects such as the fiery Olympic Cauldron, the star of the 2012 London Olympics and the slick new London double-decker buses. Their leaning towards organic, flowing shapes and integration of built and natural structures is evident in this ambitious project.