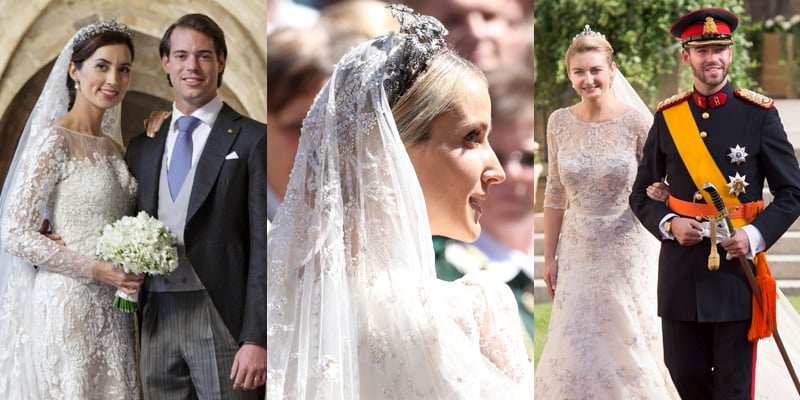 Prepare to coo over some couture…

We love fawning over a good gown here at Emirates Woman (in fact, that seems to be our lunchtime activity of choice).

And no occasion inspires such awe-inducing creations as a wedding day, particularly if the newlyweds happen to be royal.

From Catherine Middleton’s Alexander McQueen to Grace Kelly’s Helen Rose, many regal gowns have influenced brides the world over.

Read:
George Clooney opens up about his and Amal’s parenting beliefs
This Dubai-based designer makes an excellent case for blue bridal gowns…

However we like to look a little closer to home for sartorial inspiration, so we’ve pulled together some of the grandest wedding gowns created by designers of the region. 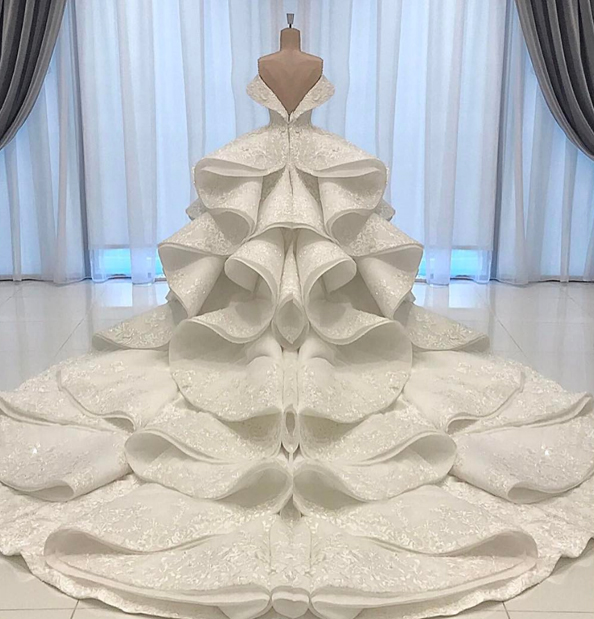 The soothing symmetry of this Michael Cinco creation proves just why the Dubai-based designer, who’s originally from the Philippines, is considered a doyen of couture. Cinco rarely shares snapshots of his royal brides in their finished gowns, instead just revealing where they’re from (this particular number was made for a Qatari princess).

The designer also often offers some insight into the astounding work that goes into the making of such an intricate gown, showing seven dexterous seamstresses working on this strapless piece. 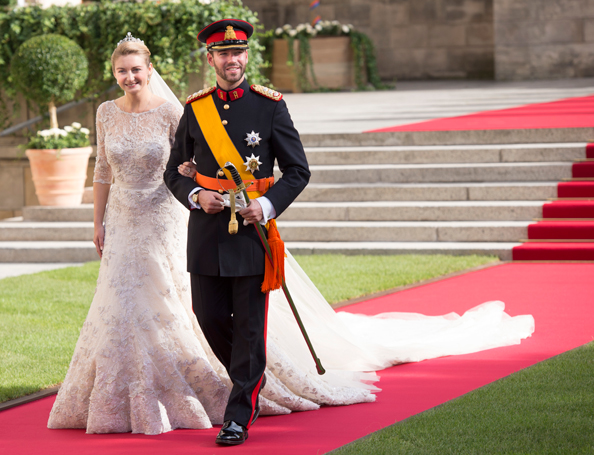 For her wedding to Luxembourg’s heir Prince Guillaume, Belgian Countess Stephanie de Lannoy turned to Elie Saab for a statement-making dress. And the Lebanese designer more than delivered, crafting a lace and silver-thread-embellished gown with sheer sleeves. From the front, it was ethereal but from the back? It was really something else. Yes, that’s a four-metre train, which looked stupendous as it swept through the Cathedral of our Lady of Luxembourg. The silk tulle veil, which was almost as long as the gown itself, was the icing on the (wedding) cake. 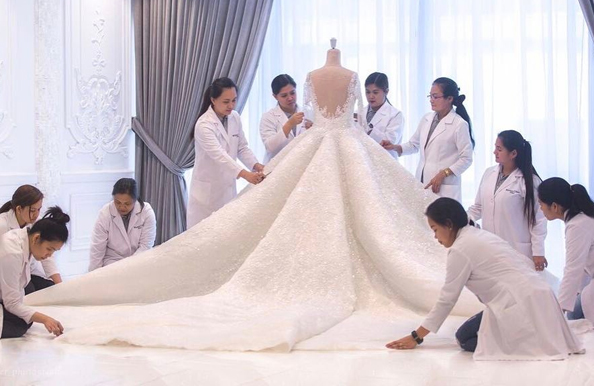 Michael Cinco produced an equally show-stopping number for another Qatari princess on his books, this time with 10 seamstresses finishing off the ornate all-over embroidery. The scooped back of this gem-encrusted gown juxtaposes perfectly against the full skirt, a silhouette Cinco’s more than mastered.

Read:
‘Be Proud Of Your Identity’: Meet The Hijabi Teen Changing The Face Of Ballet
Our Favourite A-List Gowns By Arab Designers From 2017 So Far… 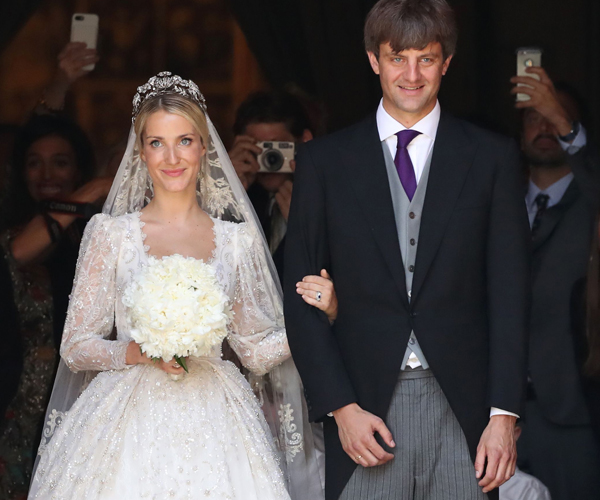 For Russian fashion designer Ekaterina Malysheva’s nuptials to Prince Ernst August of Hanover Jr, the bride turned to her friend Sandra Mansour for a custom gown dripping in regal splendour. The Swiss-Lebanese designer was inspired by floral motifs from Malysheva’s home country, blending lace, embroidery and pearls together for a fairytale finish.

The look was topped off with a glimmering diamond tiara, a Hanover family heirloom, which perfectly complemented the gown’s full train and demure billowing sleeves. 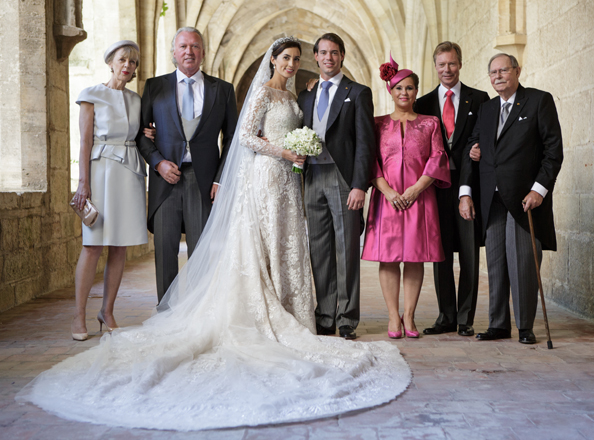 The Luxembourg royal family sure favour Elie Saab, with German heiress Claire Lademacher choosing the King of Couture to dress her for her wedding to Prince Felix of Luxembourg. The ivory-hued silk gown featured Chantilly lace, floral embroidery, and a striking three-metre train, for a look rich in bucolic charm. 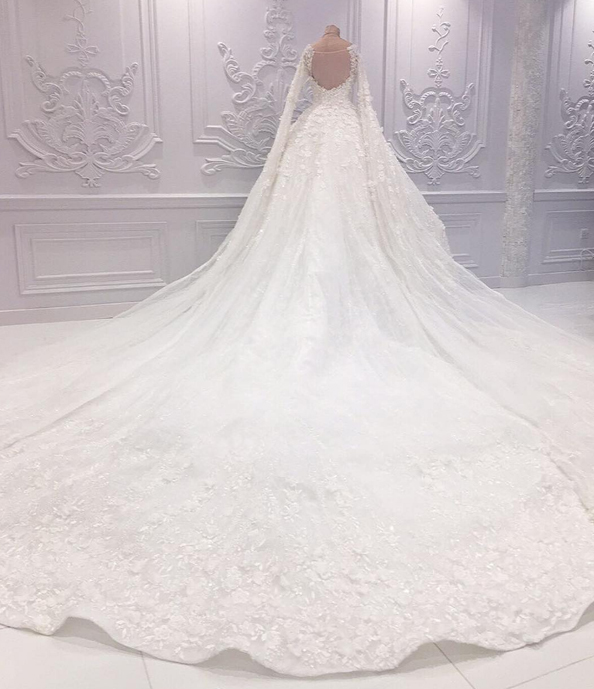 For another Qatari princess, Michael Cinco focused on creating a fluid silhouette with “never-ending” floor-sweeping sleeves. We imagine this gown would have been particularly stunning in motion. 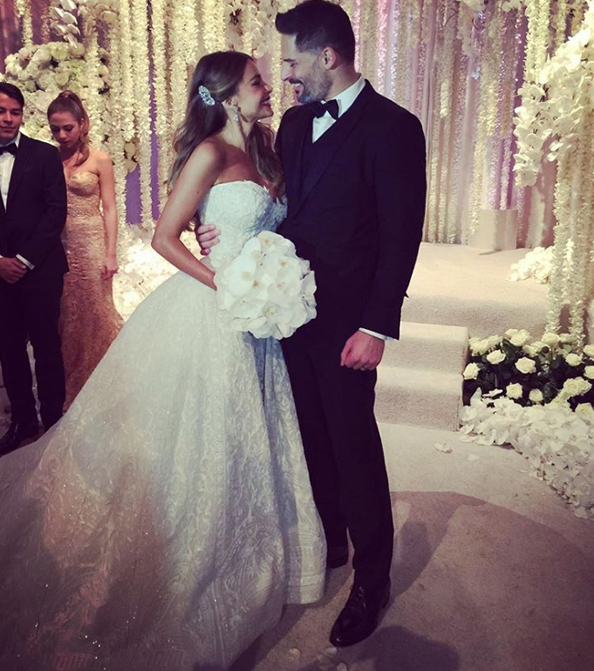 OK, so we know Sofia Vergara isn’t part of any real monarchy, but she’s part of Hollywood royalty so that counts, right? The actress chose Zuhair Murad for her 2015 nuptials, wearing an elaborately adorned strapless number with a swishy skirt.

However, for the evening’s celebrations, the gown transformed into a form-fitting lace number boasting plenty of star power. 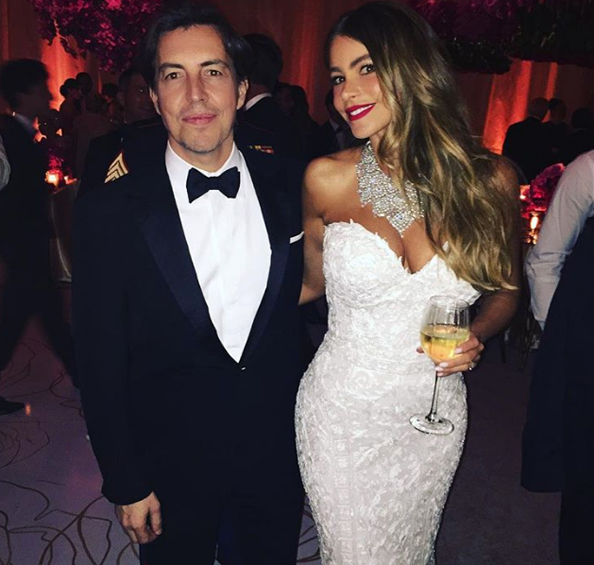 Well, our bridal Pinterest board is overflowing with ideas now…