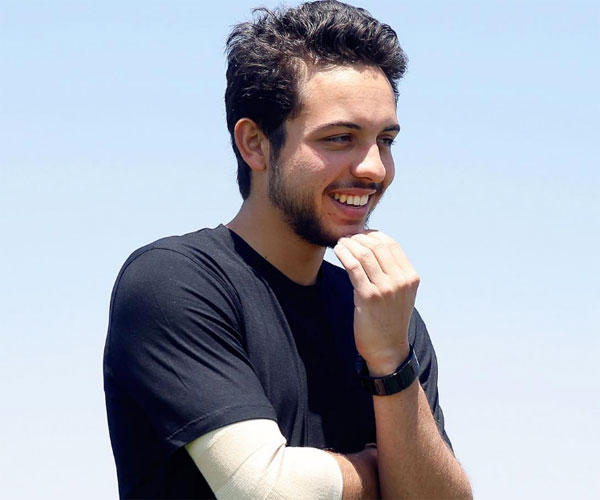 It’s been a big week for the young royal, who was catapulted into the global spotlight when he hosted Prince William, Duke of Cambridge in Jordan during his royal tour of the Middle East.

The pair sat down at Beit Al Urdun Palace to watch England storm to victory against Panama in the FIFA World Cup. But it wasn’t the final score (6-1, by the way) that had the world’s royal watchers going wild.

One fan on Twitter summed it up best: “Ok, I’m off to Jordan.”

To celebrate his birthday, here is everything you need to know about Jordan’s charismatic Crown Prince.

He’s next in line to the throne

Crown Prince Hussein is the heir apparent of King Abdullah II. He was officially appointed the next-in-line title in 2009, at the age of 15.

His grandfather was the father of modern Jordan

Crown Prince Hussein is named after his grandfather, the late King Hussein bin Talal, who reigned from 1952 until his death in 1999. King Hussein was known to his people as Al-Malik Al-Insan, or “The Humane King”, as he worked hard to improve the lives of Jordanians.

He has a history degree

In 2016, Hussein graduated from Georgetown University in the United States with a degree in international history. His sister Iman also attends the university, and is expected to graduate from its School of Foreign Service this year.

He has a shared connection with Prince William and Prince Harry

He has a charitable heart

Hussein has launched many initiatives through his charity, the Crown Prince Foundation, including a ‘Hearing Without Borders’ initiative that seeks to treat deaf children through cochlear implants and support them with specialised rehabilitation, training and education.

He knows how to use his platform

Just last month, Crown Prince Hussein completed his first solo flight in a military helicopter. The royal received the traditional “water salute” to mark the milestone – which involved a bucket of water being poured over his head. Hussein also co-piloted a chopper over the Dead Sea last year with Red Bull’s Air Force team.

Hussein is passionate about his country, and never misses an opportunity to show it off to the world. In fact, earlier this year he played host to a group of celebrities including Ellie Goulding, Karlie Kloss, Princess Beatrice and designer Misha Nonoo, taking them camping in Wadi Rum.

He has normal hobbies, too

In his spare time, he enjoys reading and sports – especially football. Hussein regularly posts photos and videos to Instagram that reveal his love for the game, and last month even uploaded a video of himself scoring a goal with a left-footed kick.