Zahra Lari: ‘With my story, I feel I have broken ground for women’ 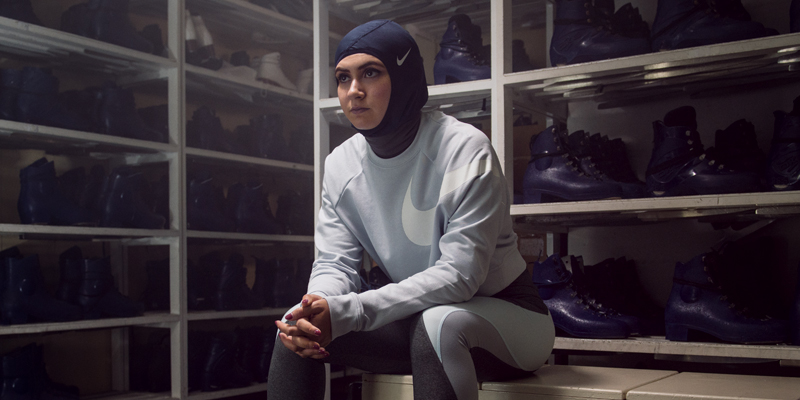 It brings back grainy memories of afterschool girl talk when Zahra Lari picks up the phone.

“Hey, how are you, how’s it going?” she says with bestie chumminess. But I judder myself back to hackette mode when she tells me she’s got a two-hour sliver of rest between trainings.

Read:
Rhea Jacobs: ‘I want to work until I no longer have to introduce myself’
Our picks: The best of new fashion & beauty app Nisnass

Abu Dhabi’s Zayed Sports City ice rink is pretty much her official P.O. Box, and she clocks in the better part of a day there – well into unsociable hours. You see, Zahra’s childhood was far more focused and sophisticated than most. Since the age of 12 she’s been hustling for heights. Dizzying heights.

Normally for a skater to reach professional level, they start at the micro age of three or four, but it wasn’t until Zahra watched Ice Princess at the age of 12 when she was hit with an unrelenting vigour. It took just three years to show off her accelerated skills, propelled by a passion that was initially put off by her parents but one they accepted over time. 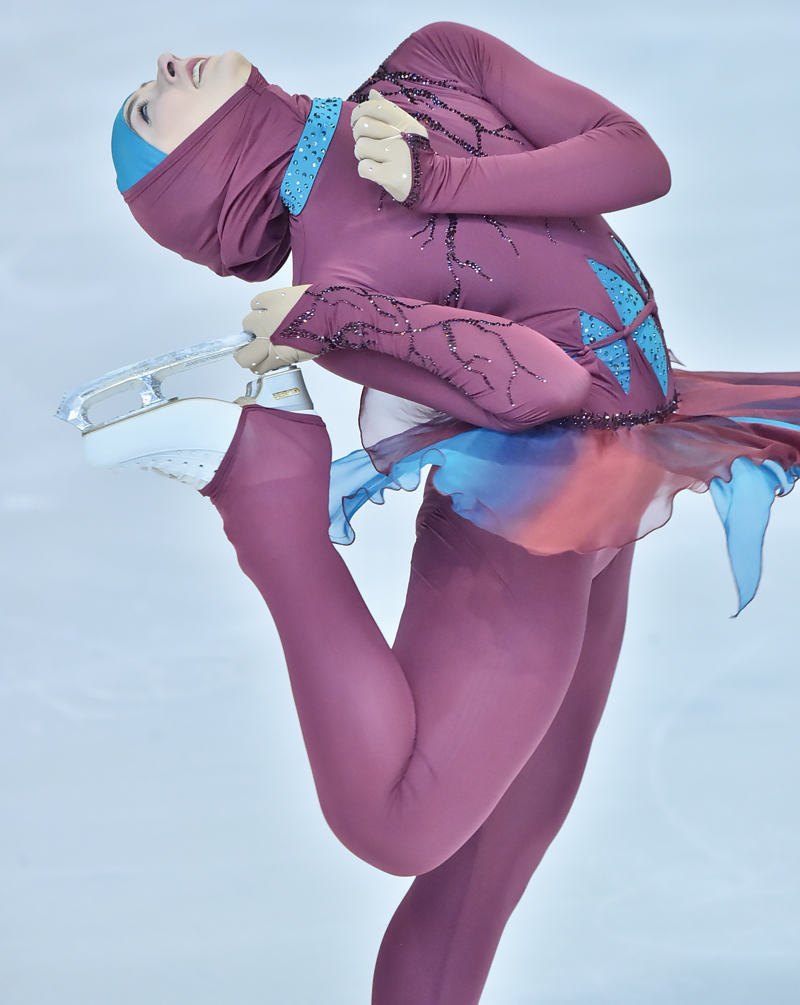 Zahra is used to blazing trails, as a hijab-wearing figure skater from the UAE.

To give you some perspective on how quickly she advanced in the sport, to complete a triple jump in less than a second (that’s taking off and rotating three times in the air, to me and you) normally takes 10 years of punishing practice. Zahra did it in three years. Gravity never brought her down too quickly – neither did any criticism.

She was spotted by a Romanian coach who visited Abu Dhabi in 2012 and applauded her sharp skills, ushering her to compete in the European Criterium Figure Skating competition in Italy, where the noise surrounding the novelty of an Emirati female in sports grew louder and louder.  It was about firsts in many aspects: first professional competition, first Emirati to compete and first woman to wear a hijab before a panel of international judges, who deducted points for her being covered. But very gracefully, she gave them the benefit of the doubt.

“Although I didn’t see that coming, I didn’t judge them because I knew they had never seen someone covered before. They saw it as a prop and a health and safety issue, fearing it might fall off, but then I proved to them that it stays on and it wouldn’t be a liability. Everyone is the same, we are all equal and we should be judged on our talent, not based on where we come from or what we wear.”

Fast forward to now, and it’s crunch time. In January Zahra earned her fourth UAE national title, and with the season over within weeks, she’s pushing herself to beat her personal best score of 84 (broken down, that figure represents the quality of her jumps and spins as well as artistic precision) at an upcoming competition in Germany. 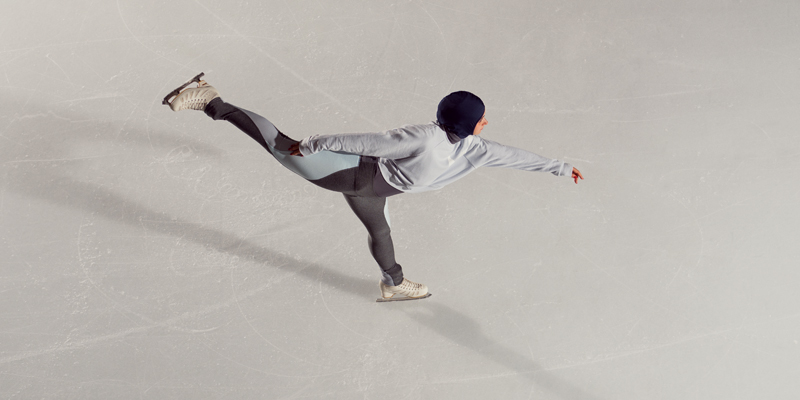 As body-breaking as figure skating can be, contorting your frame while “your heart rate is super high for four straight minutes” you have to “keep smiling and make it look elegant”. Off-rink, she’s as inconspicuous a young woman as any you’d see linking arms with her girlfriends at the mall – no frills, no fuss, just who she is.

But for a girl who has yet to break into the quarter life arena, she’s ticked a lot of life boxes. The latest being an ambassadorial role for Nisnass – the go-to fashion source for millennials, a post which falls outside the typical sport-related press circuit she’s been riding. She might lend her voice to many conversations and causes but she’s not that forthcoming with who she partners up with.

“I’m very specific about the message I want to send out to people so I don’t accept collaborations that easily. I choose the brands very carefully. Nisnass for me is all about being who you are – which they allow me to be. My main message is, don’t let anyone change who you are.”

With success has come stardom and with stardom has come a rigorous PR machine that has attempted to change Zahra but she isn’t having any of that. “This is why I am picky about who I partner up with. I don’t easily accept campaigns unless it sits with who I am” she says, “and Nisnass celebrates individuality and people who are doing big things, their way.”

Spearheading conversations on female empowerment is a mainstay of Zahra’s agenda and she’s hell-bent on reversing the perception that women and sport do not mix. Perhaps it’s the theatrical component to figure skating that gives rise to lampooning critics writing off the sport as just a bit of dancing or twirling . Zahra, however, is convinced that even if she were in a more mainstream sport like running or weightlifting, she’d still have a battle to fight. 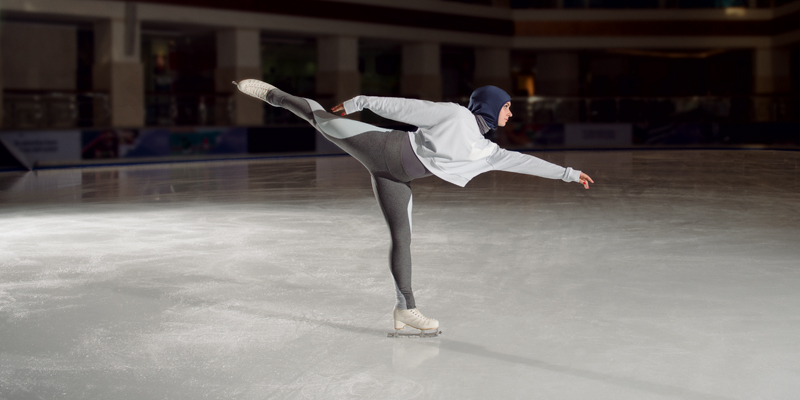 “I don’t think it matters what sport you do, women in sports was not common in general at all, but with my story I feel I have broken ground for women.”

Zahra’s got the support of the nation behind her – take the Fatima bint Mubarak Ladies Sports Academy – a seal of approval doesn’t come bigger and better than that. Her initiative to encourage more women to take to sports requires grassroots education, which has seen her speak at the International Conference of Sports for Women as well as in schools.

Read:
Dubai designer behind Queen Rania’s look is ‘over the moon’
Amal Clooney opens up about welcoming a refugee into her home

“It’s going to take a while for parents to accept their girls doing sports as a legitimate thing, but more conversation and awareness opens the mind. But ultimately it shouldn’t matter if you’re a man or a woman. You can still go out and do what you want to do.”

And with that mature mettle comes a huggy down-to-earth warmth – she’s just another girl, doing what she loves. When she’s not being a budding Olympian, “you’ll always find me at the sea”. Female empowerment and beach bliss? Zahra’s definitely got the right idea.