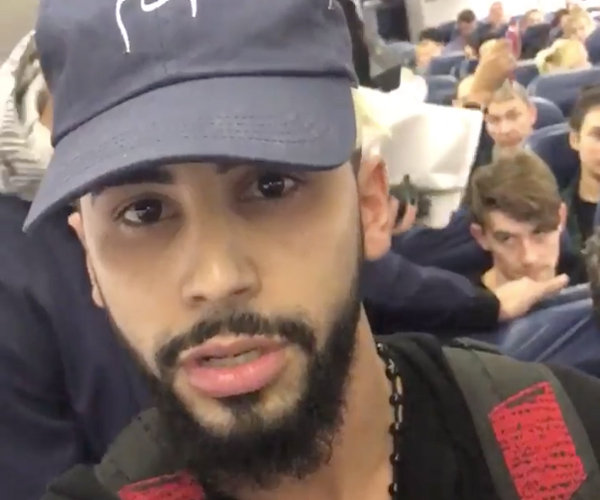 Amid a rising wave of Islamophobia in the USA, a social media personality has accused an airline of forcibly removing him from a plane after passengers heard him speaking Arabic.

Adam Saleh, an American-Yemeni prankster with a huge YouTube following, claims he was escorted off a Delta Airlines flight from London to New York on Wednesday.

The 23-year-old, who performed in Dubai earlier this year, said passengers heard him talking to his mother on the phone and allegedly “felt uncomfortable and called flight attendants”.

Thank you for all your support pic.twitter.com/ukQ4EGVQ6r

“They kicked us off the plane because a lady, because a lot of people felt uncomfortable,” Saleh said in a Twitter video he posted shortly after the incident at Heathrow airport. “Delta Airlines just kicked us out for speaking Arabic.”

Read:
Lindsay Lohan Attributes Her New Accent To Learning Arabic
A Saudi Woman Who Chose Not To Wear Traditional Dress Has Been Arrested

The social media star was travelling with his friend Slim Albaher, another YouTube personality, who was also taken off the aircraft. Saleh is famous for staging elaborate pranks in his video, sparking skepticism about the latest incident, but he told The Guardian it was not exaggerated.

A fellow passenger corroborated the story, telling the New York Times that “[a female flier] heard somebody speaking in Arabic and assumed the worst”.

In the clip Saleh shared with his 320,000 followers, the pair are seen making their way down the plane with airline staff behind them. As Saleh tells the camera “we spoke a different language on the plane and now we’re getting kicked out”, some passengers shout goodbye while others protested the action.

We got kicked out of a @Delta airplane because I spoke Arabic to my mom on the phone and with my friend slim… WTFFFFFFFF please spread pic.twitter.com/P5dQCE0qos

The two were booked on a later flight and have now returned to the US.

“Two customers were removed from this flight and later rebooked after a disturbance in the cabin resulted in more than 20 customers expressing their discomfort,” Delta posted on its website shortly after the incident. “We’re conducting a full review to understand what transpired. We are taking allegations of discrimination very seriously; our culture requires treating others with respect.”

The airline has since released a statement defending the pair’s removal, saying Saleh and Albaher were being disruptive.

“Upon landing, the crew was debriefed and multiple passenger statements collected,” Delta said. “Based on the information collected to date, it appears the customers who were removed sought to disrupt the cabin with provocative behaviour, including shouting. This type of conduct is not welcome on any Delta flight.

“While one, according to media reports, is a known prankster who was video-recorded and encouraged by his travelling companion, what is paramount to Delta is the safety and comfort of our passengers and employees. It is clear these individuals sought to violate that priority.”

Saleh says he is now pursuing the issue with his lawyers.

“What they did was wrong and we deserve to speak up about this and not let this happen again,” he posted on Twitter in a statement, as the hashtag #BoycottDelta started trending.

Aside from hoaxes, many of the social media star’s videos touch on his faith, and he told What’s On earlier this year that people “should be proud to be Muslims.”

“I want to use my platform to spread knowledge of Islam and show aspects of my religion that the media doesn’t,” he said.