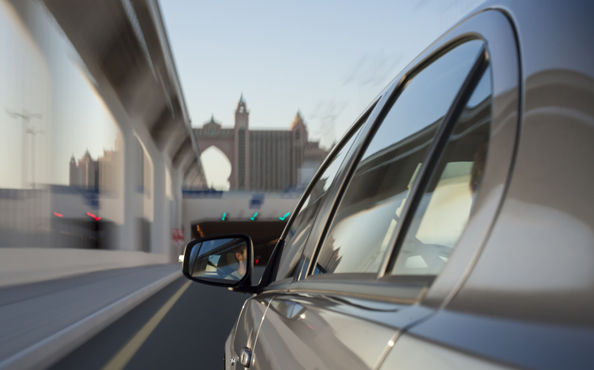 Getting around Dubai just got a little easier thanks to Sheikh Hamdan bin Mohammed Al Maktoum, Crown Prince of Dubai.

You will soon be able to rent a car on an hourly basis after a directive was issued by the royal, who is also Chairman of the Dubai Executive Council.

The move hopes to give residents an alternative and cheap method of getting around the city, according to the Roads and Transport Authority.

However there are some boundaries – you won’t be able to rent a vehicle for more than six hours a day, and you can’t take it outside the UAE.

The person renting the car must, of course, have a valid driving license, and the company renting out the vehicle must obtain a special permit from the RTA.

Mattar Al Tayer, director-general and chairman of the RTA’s Board of Executive Directors, suggested on Twitter that pick-up locations would be close to metro and tram stations.

So if you need to get across town but don’t want to splash out on an expensive, long taxi ride – you’ve got a new solution, one that lets you use public transport as much as possible to keep traffic congestion to a minimum.

Currently, companies across the city don’t rent out cars for fewer than 24 hours (irrespective of if you need the vehicle for less).

The resolution will be published in the Official Gazette, and will be effective 60 days after the date of its publication.

So could uDrive now change?

The news could see the return of an offer that gave drivers pay-per-minute car rental around Dubai.

uDrive launched in March, offering motorists the chance to rent a vehicle for 50 fils a minute – however regulations meant it had to curb its service to 24-hour rental only (at Dhs99 a day).

“The previously offered service per-minute car rental scheme is currently put on hold until certain logistical, regulatory, and administrative issues are resolved,” the company says on its website. “We are working very closely with the Road and Transport Authority (RTA) to offer this service in a way that is compatible with the rules and regulations governing car-rental activity in Dubai.”

There’s no word yet on whether the company, which allows customers to find and unlock a car using their smartphone, will be able to reinstate the service, but the RTA announcement may offer fresh hope.