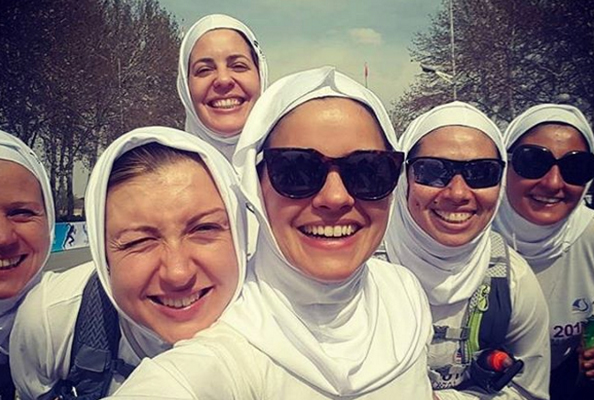 When these runners were blocked from taking part in the full 42 kilometres, they took to the park instead.

It was supposed to have been the first Iranian marathon that let both women and men compete, albeit at separate times.

Instead, these female runners were told at the last minute they could only take part in a 10,000-kilometre race.

Out of more than 440 runners, a number of women had signed up for the country’s first TehRUN, a 42-kilometre marathon around the capital city.

Read:
A Huge Beauty Brand Chose This Iranian Mum-To-Be For Its New Ad
Women In Iran Defy A Fatwa And Get On Their Bikes

On race day, they were told the options for a full and half-marathon no longer existed, so they came up with an alternative.

A group of around a dozen women ran around a local park for 32 kilometres, before joining the official women’s 10km race on Friday April 7.

“I was arguing and arguing with the registration guy because I came all the way from Dubai for a marathon, not a 10K,” Egyptian runner Manal Rostom, who took part in Nike’s new sports hijab campaign, told The Independent.

“He told me in the end I could show up and run outside if I wanted, but I risked getting arrested.”

Female runners who took part in the 10k had to abide by a dress code, with TehRUN asking participants to “dress modestly to respect local customs and religion” by covering their limbs and hair.

As they were in a public space, the runners who ran 32km around the park also maintained the strict dress code.

“We were carrying our own water and food and running the same loop over and over again, while two men were offering us tea, cheering us on and running with us,” Karin Brogtrop-Beekman, a runner who travelled from the Netherlands, told the UK’s Stylist.

“This was my fifth marathon and I cannot compare it to any other marathon. We had a great race due to our own positivity.

“I’m so happy we pulled it off in such a positive and non-offending way, we all just had a ball.”