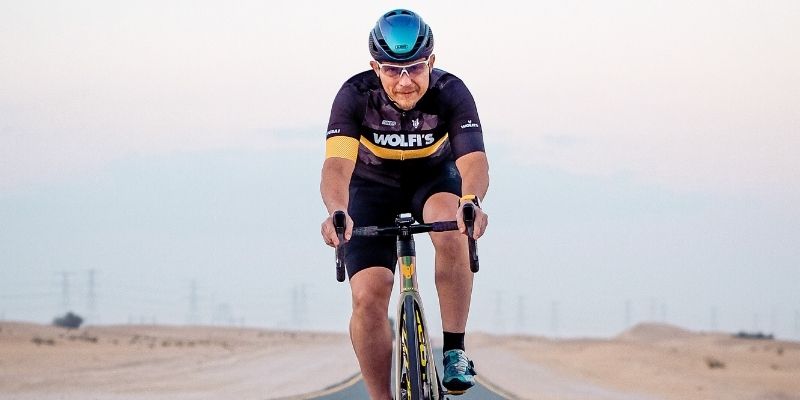 Dubai-based Wolfgang Hohmann, aka Wolfi, has been bringing cycling to the forefront of the consciousness of an entire nation for nearly two decades.

Shutting down a section of the 14-lane arterial Sheikh Zayed Road in Dubai to allow only cyclists to come out onto it for the very first time was a bold, multi-tiered statement.

The initiative, part of the Dubai Fitness Challenge 2020 season spearheaded by Sheikh Hamdan bin Mohammed bin Rashid Al Maktoum, Crown Prince of Dubai, was one that not only prioritised health and fitness, but which also demonstrated the maturity of the cycling community here in Dubai and the UAE.

Enjoying a ringside view of the growth of this community, and playing a vital part in keeping it lit, is Wolfgang Hohmann, aka Wolfi. He arrived in Dubai in 2002 and opened a small bike shop in the city with his only assistants back then being his wife, and another friend he brought over from Germany who worked as a mechanic at the shop.

That small-scale business has today grown into a 700-square-metre operation on Sheikh Zayed Road which employs over 60 people and retails some of the top cycling brands – and which also counts Sheikh Hamdan among its customers.

“We operate as a retailer. We also have a distribution department where we supply other bicycle businesses in the region with equipment,” says Wolfi who, through his WBS Sport Equipment Trading, supplies to retailers in several other countries including Saudi Arabia, Bahrain, Oman and Qatar.

Wolfi’s Bike Shop welcomes the entire spectrum of riders from amateurs to professionals. But the average starting range of its bikes is approximately Dhs2,500 and can go north of Dhs60,000 for Tour de France-style bikes. Some of the major brands it retails include Swiss manufacturer Scott, Italian bike specialist Colnago and Canadian cycling rage Cervélo.

But Wolfi won’t encourage you to merely stroll in, pick a bike and ride out. At the store, he has installed a laser-guided measuring machine from Germany called the Radilabor Cycling Laboratory Smart Fit System. The body-and-bike scanner includes a database of frames from every major cycling company in the world to help fit and recommend the right bike for specific individuals.

Also, another tech-driven product used at Wolfi’s is the pressure measurement system called GebioMized, used by the German National Cycling team for its pro athletes. It uses sensors to gather data around a saddle analysis, foot analysis and pedalling efficiency analysis.

“We’re trying to eliminate this process of trial and error,” says Wolfi of the process of helping people find the right bike for them. “It’s almost like a custom-made suit.” 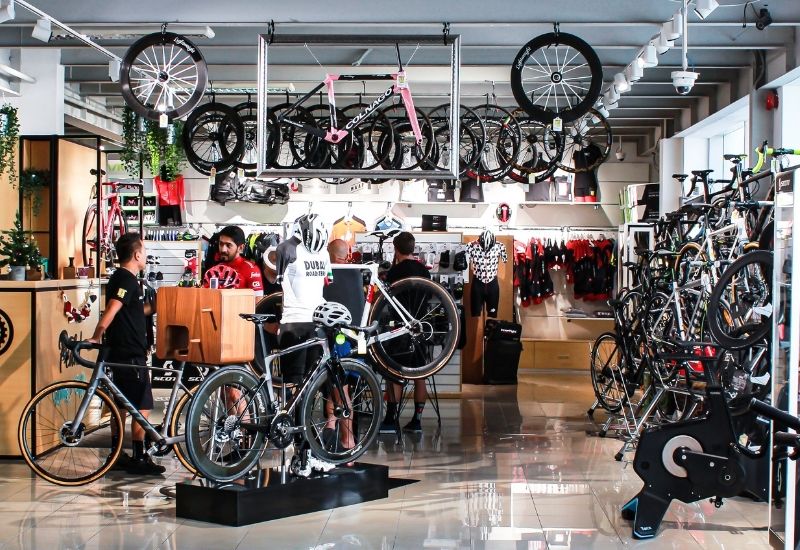 Wolfi could as much have had a flourishing career as a Michelin star chef, as he does within the pro bicycling industry. Back in the late Eighties when he was coming of age, he worked in the kitchen of a one-star Michelin restaurant in Freiburg, Germany. “In the Eighties, mountain biking was big. The area where we were was close to the French and Switzerland border. Along with a friend, I decided to offer a rental service of mountain bikes to the guests of the hotel and entertain them with some nice riding in the Black Forest.”

It was then that he realised he had an above-average understanding of cycles. The lessons that he learnt in the kitchen meanwhile could serve him just as well in the bicycle industry too. “I learned a lot about working under enormous pressure [in the kitchen], delivering under time pressure an exact product where customers’ expectations are extremely high when it comes to that style of a restaurant.”

When Wolfi decided to move to Dubai to start his bike shop, he says the community of riders was very small. By way of the Dubai Roadsters which he now leads, that community has mushroomed, and undertakes weekly rides across various locations in Dubai.

The city too has responded to the needs of cyclists by building cutting-edge infrastructure. There are several dedicated cycling tracks including the 67km Al Qudra track which connects Al Barari area with Bab Al Shams, and the 13km Meydan Track in District One.

As of August last year, the Dubai’s Roads and Transports Authority said that it has built a total of 425km of cycling tracks, which will extend to 647km by 2025 by way of upcoming projects in DIFC and Jumeirah Corniche beach. 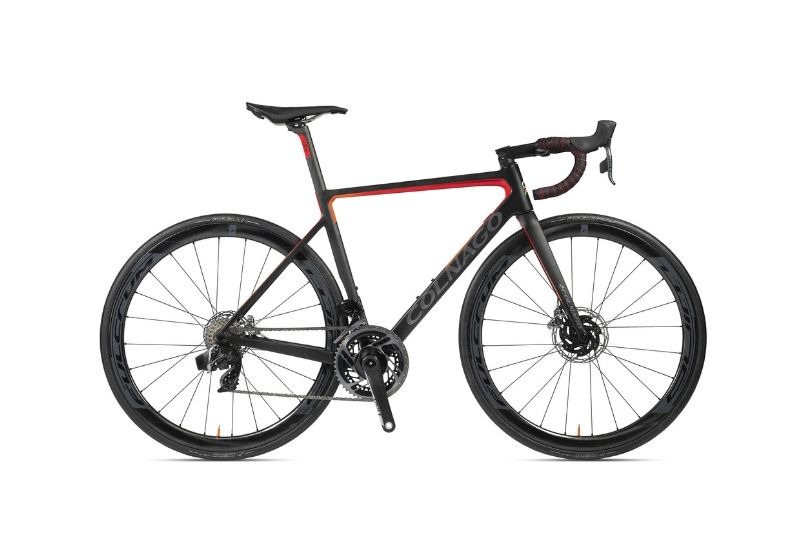 Wolfi says that a crucial factor was that the biking community has been supported by the vision of the country’s rulers. “Sheikh Hamdan is the leading person behind all these events. It’s just incredible what he’s doing for us. I think it’s because he loves the sport so much,” says Wolfi, who notes that the Dubai Crown Prince is often seen riding his Colnago. “He has some other bikes that he enjoys too. We make sure that he always gets the latest equipment to enjoy the best things.”

Investing in the cycling ecosystem even further, Abu Dhabi investment fund, Chimera Investments, last year acquired a majority stake in Colnago whose bikes have been ridden to victory at world-class competitions including the Olympics, the Paris-Roubaix and Tour de France.

Professional cycling in the UAE had its moment when 21-year-old Slovenian Tadej Pogačar from UAE Team Emirates rode to a spectacular victory at the Tour de France last year. Earlier this year, in one of the biggest boosts for the country’s professional cyclists, the UAE’s sovereign wealth fund Mubadala also announced a sponsorship deal that it had reached with UAE Team Emirates.

Other events like the UAE Tour, a UCI WorldTour race, has already attracted top cycling talent to participate in the event including Chris Froome, Pogačar, Mark Cavendish and Adam Yates.

Looking forward, Wolfi says that there are plans to expand his business into Abu Dhabi and perhaps into the broader GCC region too, although those plans haven’t been finalised. “The GCC countries are interesting for us because we feel cycling can be as successful as it is in Dubai. Qatar is a big market and we had a Tour of Qatar a few years ago. Israel is a big market to expand into too.”

Wolfi has shown how it’s possible to build a ground-up grassroots passion for cycling. There’s little that stands in the way of replicating that model, as successfully, in any other country that he trains his sights on next.

The V3Rs is a true piece of history and was made famous by Tadej Pogačar of the Team UAE Emirates who rode the bike to victory in the 2020 Tour De France. This was the first-ever Tour De France win for Pogačar. This bike represents the best of Colnago technology and is fast on long climbs, windy plains and in big tours, it is perfect in all situations.

This bike is an absolute speed weapon. The goal of Scott when creating the Plasma 6 was simply to build the fastest bike the triathlon world has ever seen and we think they are well on their way to achieving this mission. To make this possible, the engineers came up with completely new ways to look at aerodynamics, cockpit adjustability, and storage integration. This bike will be the envy of all triathletes and would be perfect for UAE events such as Ironman 70.3 Dubai.

The Megatower is a fusion of big wheels and hard-hitting suspension – in other words, it’s an absolute brawler. This bike can tackle any rough terrain or jump you throw at it but it’s also a clever piece of machinery that adapts nicely to technical climbs and open roads due to its sharp 76-degree seat tube angle. Not only will you feel confident on the fastest and roughest descents on the Megatower, but you’ll also feel relaxed tackling homegrown trails at Hatta and Showka.

Emirates Man
How I got my job as… Founder of this UAE-based artisanal pizza haven
November 28, 2022