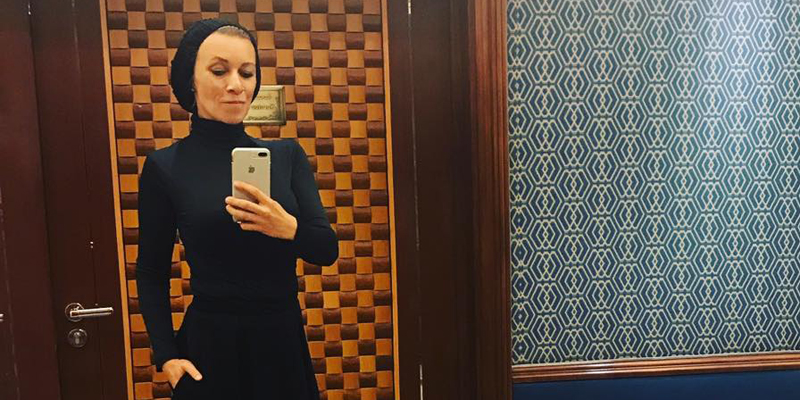 When female foreign dignitaries travel to Saudi Arabia on official trips, most of the time, they choose to leave their hair uncovered.

First Lady Melania Trump was a prominent example this year, as was German Chancellor Angela Merkel. Other leaders to have shunned the scarf include British Prime Minister Theresa May, former Secretary of State Hillary Clinton, and former First Lady Michelle Obama.

That’s because the hijab is not compulsory for foreign visitors. While Sharia law requires all women – local and foreign – to dress modestly, non-Muslim women are not required to wear the headscarf.

But one Russian official has bucked the trend on a recent visit to the conservative kingdom.

Maria Zakharova, a spokeswoman for the Russian Ministry of Foreign Affairs, shared a photo of herself to Facebook, wearing a black abaya and hijab.

“In Saudi Arabia, I was asked if we’d be observing the local dress code. I said of course,” Zakharova wrote, according to a translation by Al Arabiya.

She went on to explain that she believed in respecting other people’s traditions and cultures.

It’s a sartorial choice that has definitely won her a few fans – her mirror selfie has received more than 14,000 likes and 300 shares.

Zakharova certainly knows a thing or two about diplomacy. She was born to a family of diplomats and spend her childhood in Beijing, before she went on to study journalism.

In 2015, she was made director of the Foreign Ministry’s information and press department – becoming the first woman to hold the post.

She also made the list of the BBC’s 100 most inspirational and influential women for 2016, which noted “she has made waves with her combative and colourful style”.