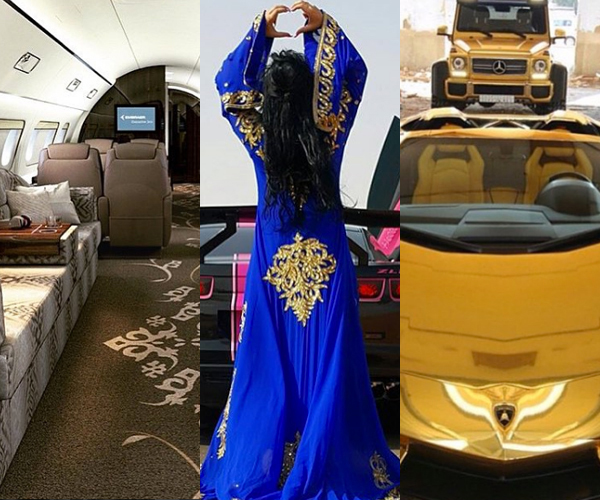 The “Rich Kids of” Instagram accounts aren’t a new phenomenon.

There are pages dedicated to wealthy teens in London, Germany, Hong Kong, Switzerland and right here in Dubai.

You think of a city, there are probably some affluent children posting about it on social media. However one particular page has gained worldwide attention this week for its OTT levels of luxury.

Read:
7 Of The Best Relaxing Spa Deals Around Dubai This Summer
This Lebanese Man Just Popped The Question At 36,000 Feet…

If you Google the Rich Kids of Saudi Instagram page, there are stories dedicated to it from newspapers around the globe, including The Sun, The Independent and the Daily Mail.

You only have to view a few posts to see just why people are incredulous. There are multi-million-dirham cars:

And even actual gold bars.

Most similar accounts around the world feature first-class cabins and wads of cash, but Saudi’s is certainly next level.

And it’s hardly surprising, with an estimated 10 billionaires and 167,000 millionaires living in the oil-rich kingdom, according to Business Insider.

Even with a finite amount of oil in the world and volatile prices, the amount of millionaires in Saudi is expected to rise by 72 per cent over five years, a Credit Suisse Research Institute report stated in 2015.

Read:
Zuhair Murad’s New Collection Looks Like Something Straight Out Of A Fairytale
14 Of The Best Travel Hacks That Will Make Your Holiday A Breeze

So could this social media swagger intensify even more in the next few years? Quite possibly.

However, some accounts in the Middle East have made attempts to instead promote philanthropy rather than bragging among their wealthy followers, particularly during the Holy Month.

This Ramadan we don’t want to know about how you’re living. We want to know how you’re giving! Tell us about the charitable causes you or your company are involved with and we will feature on our page in order to spread awareness #richkidsgiveback #richkidsofdubai

“Tell us about the charitable causes you or your company are involved with and we will feature on our page in order to spread awareness.”

That’s a sentiment we can definitely get behind… here’s hoping we see more of it on these accounts in the future.