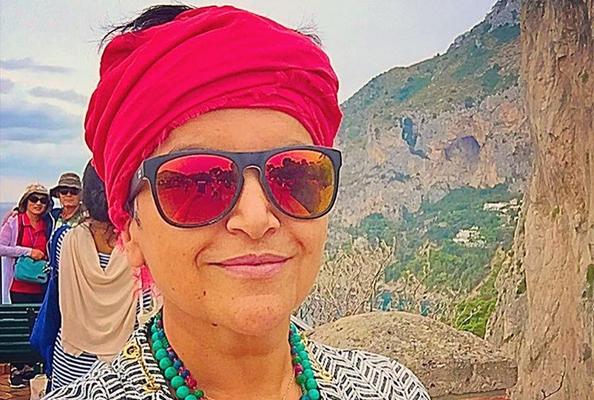 Here at Emirates Woman we’re all about women smashing that glass ceiling… which is why we think you need to familiarise yourself with Safa Al Hashem.

The liberal politician is currently the only female member of Kuwait’s parliament, and even made history as the first woman to win a seat in consecutive elections.

Fifteen women ran for a spot in the Arab nation’s 65-member parliament last year, but only Al Hashem prevailed (she first got elected back in 2012).

However, despite being the sole female of the 2016 assembly, the businesswoman is making sure her voice is heard.

Read:
10 Royal Looks To Inspire Your Ramadan Wardrobe This Year
The Work That Went Into Creating This Qatari Princess’ Wedding Dress Is Next Level

Al Hashem made headlines earlier this year after calling for more charges and taxes on expats living in Kuwait, saying she did so out of patriotism.

“I had to sound the alarm regarding the demographic imbalance when citizens are outnumbered by foreigners by two to one,” she told Kuwaiti newspaper Al Qabas.

“Regardless of how much a country is wealthy, the overuse of its services inevitably drains its resources and undermines its society.”

The politician, who has a degree in English Literature and MBA from Pennsylvania State University, is also popular on social media, with more than 240,000 followers on Instagram.

Read:
Video: Sheikh Zayed Was Ahead Of His Time On Women’s Rights…
An Emirati Woman Will Lead the UN In Female Empowerment

Before turning to politics, she worked for the government’s Ministry of Higher Education, as well as setting up a business consultancy.

(And on a totally different note, she’s also our new muse for office-appropriate glasses).

She’s also got a penchant for a power suit (much like Hillary) and her social media accounts offer a eye-opening insight into life as the country’s only female MP.

We’re looking forward to seeing what Al Hashem has in store this term, but in the meantime, here are a few of our favourites ‘grams from the lady herself…