What’s It Like To Spend A Night At The Madinat’s Newest Hotel? 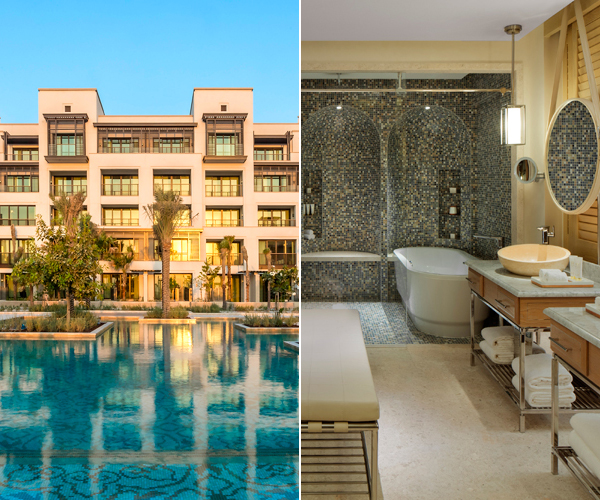 It’s the final chapter in the sprawling Madinat Jumeirah complex… but was it a happy ending? We trial Jumeirah’s new Al Naseem hotel.

Nestled underneath the shadow of the Burj Al Arab, this is the newest addition to Dubai’s five-star hotel scene – and the location couldn’t get much better. A stone’s throw away (well, if you’re an Olympic shotputter) from the iconic sail-shaped structure, Jumeirah Al Naseem opened its wood-and-glass doors just last month.

So, is it worth adding to your staycation list? We had a whistlestop visit to test it out… 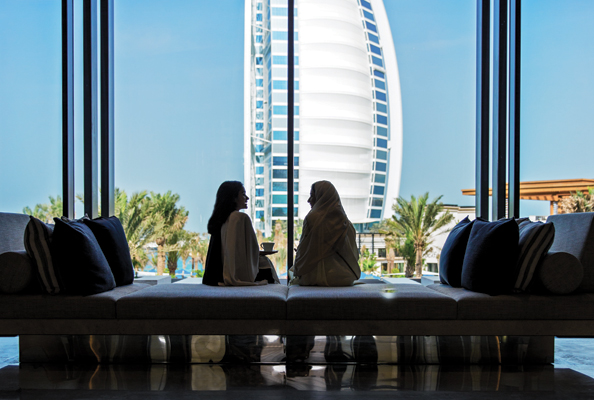 Read:
Nine Wedding Venues In The UAE That Aren’t Just City Centre Hotels
Suite Dreams: Here Are 10 Of The Swankiest Places To Stay In Dubai

The Al Naseem is the last brick in the Madinat Jumeirah wall, figuratively speaking, taking the beachside resort to a total of four hotels. And while the Al Qasr feels like an Arabian palace and the Mina A’Salam is more of a family-friendly boutique number, the 430-bedroom Al Naseem feels more like a laidback – but luxury – island escape. The hotel itself has a nautical theme – the name means sea breeze in Arabic, and the decor is inspired by Dubai’s pearl diving history – but the numerous wooden shutters also create a rather Balinese ambience. 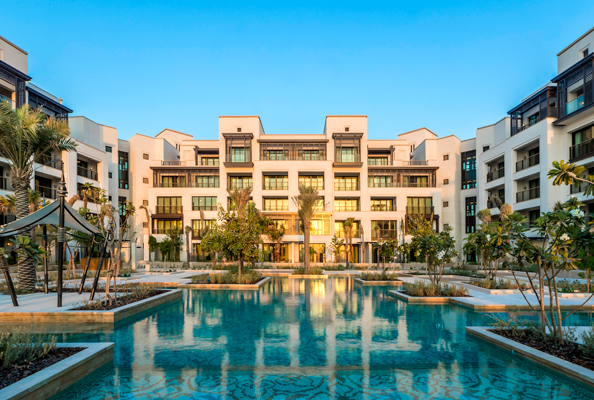 And it’s not just a hotel, oh no – with this launch came the opening of an endangered turtle lagoon, as well as 10 new bars and restaurants, and the entire complex now spans a whopping two kilometres of Al Sufouh oceanfront. And because it’s part of the wider Madinat Jumeirah, staying at the Al Naseem means you also have access to around 40 more of the complexes eateries and watering holes, along with the souk and signature abra tour. Also complimentary for guests is entry to the Wild Wadi Water Park (which, considering a single adult admission is Dhs275 makes this rather excellent value).

In short, sleek, slick but not over-stylised. From the sprawling golden tree engraved into the entranceway’s floor to the black marble trims, you know Al Naseem is all class from your very first step inside. The overall palette is creamy, with fluttering drapes and metallic-flecked couches in abundance – the focus is very much on guest comfort and convenience. 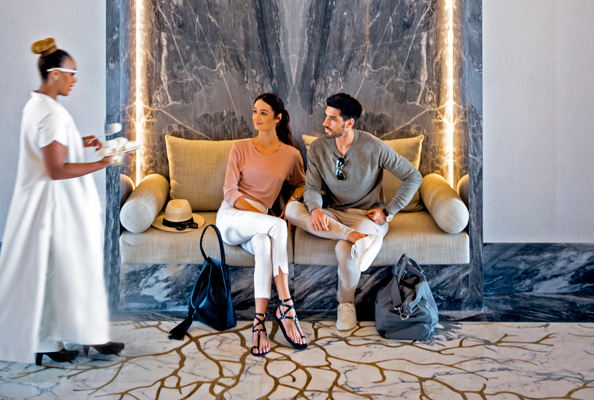 Gigantic light fixtures adorn the lobby ceiling, along with a gently waving silver metal artwork behind the front desk, which together feel momentous but not OTT. Even the staff themselves fit the theme in their flowing cream shifts with metallic coin necklaces – simply put, the aesthetic is chic but enormously relaxing, a much-needed atmosphere after stepping off a hours-delayed flight.

We bunkered down for the night in a Resort Superior – and we found it rather superior indeed (to our sparsely decorated bedroom and simple shower at home, that is).

We entered into a lengthy passageway, with an open-plan bathroom to the side which can be closed off with large, layered wooden shutters. A large, pillowy king-size bed, a desk and chair, bedside table, in-built reading lights, and a large dresser with a chest of drawers, fridge, Nespresso machine, and quirky minibar goodies make up the main bedroom – and there’s also a comfy sofa with overlapping table perfect for lazing on while taking in the cable TV. 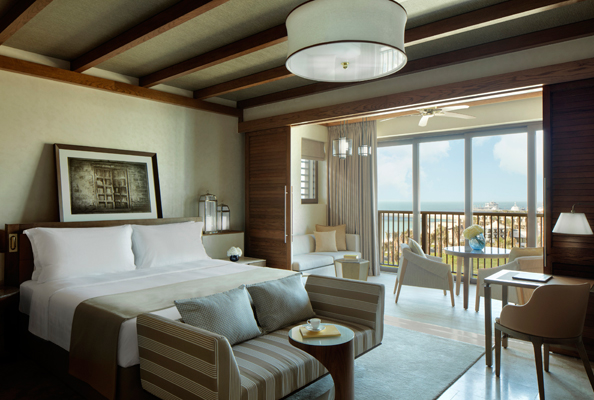 An Arabian desert scene etched onto the white walls, along with electrically-lit lamps and a large print above the bed, are well-thought-out finishing touches that add a splash of culture, while still keeping things tastefully simple.

The balcony – which took a call to the front desk to open, it turns out there’s an button behind the desk – featured a small table with two seats, along with a very cushiony armchair. The prime attraction of the outdoor space, however, was the front-row view of the Burj Al Arab, bathed in a red and green glow.

Speaking of baths, the bathroom was the most outstanding element of the accommodation, with its shimmery tiled wet room, twin sinks, built-in dressing table and very handy bench (the underneath of which is perfect for hiding away large suitcases). 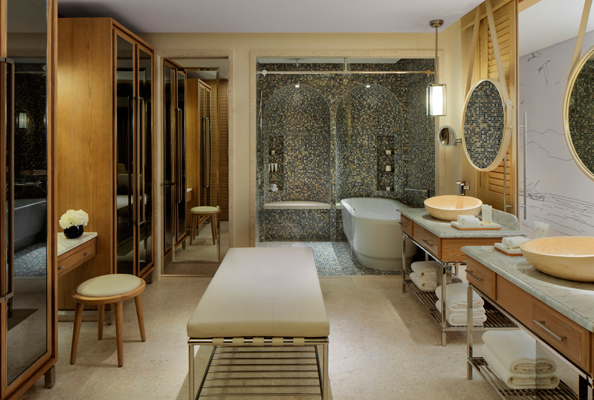 With a plentifulness of full-length mirrors, along with the silkiest towels we’ve ever touched and a wealth of Amouage toiletries (yes, we did pinch the shower gel to take home), make sure you schedule in some time for a proper pampering session during your stay. Al Naseem also gets brownie points for the heart-shaped head pillow attached to the bath and the powerful rainfall shower, along with the Instagrammable leather-strap-hung vanity mirrors.

After a morning spent wandering the sprawling complex, let us just say, adults-only pools are the way forward. Al Naseem’s, found on the upper outside level, was a serene oasis, where you heard no splashing and no shrieks, just some tunes blowing from invisible speakers. The Tetris-shaped pool was like a warm bath, and the cabanas in particular offered a sweeping view over the beachfront and Burj. 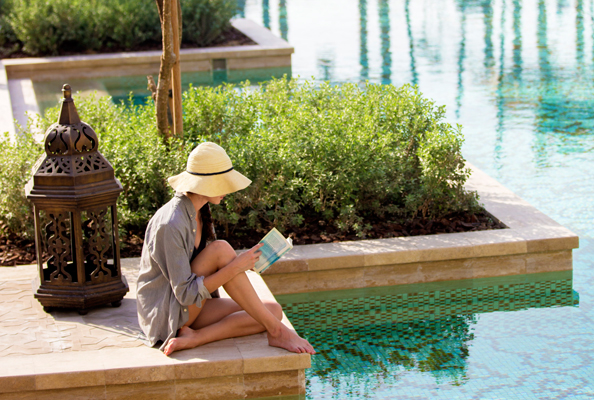 As we visited mid-week, however, even the two family pools on the lower level were relatively quiet – and the pre-rolled towels on every sunbed were a nice touch. We made good use of the swinging day beds – set amid lush greenery – for a spot of shaded reading, and a trip to the 150-square-metre lagoon occupied by rehabilitating turtles only added to the desert-island-like feel.

Alas, thanks to our delayed flight from Muscat, we were unable to sample the seafood at the hotel’s Rockfish restaurant – however, as our affable check-in receptionist advised – room service is available until 11pm. So tuck in we did, ordering an array of Arabic mezze which was wheeled into our room only 30 minutes later. The server even arranged our meal – complete with fresh flowers – on our balcony so we could eat alfresco while watching the Burj perform its evening light show. The fluffy, flavoursome spicy potatoes were a particular highlight while the tiramisu, served later at our request, made for a sweet nightcap post-bath.

The buffet breakfast, served at The Palmery, was plentiful, with a ream of live cooking stations. We sampled as much as we could – though our bellies didn’t allow as much as we’d have liked – and made a dent in the shelves of fresh fruit, mini eggs bennies, infused waters and fresh juices, straight-off-the-griddle waffles and pancakes, and honey dripping straight from a chunk of honeycomb. We’d like to have stayed longer to put together a proper plan of attack for trying all the different dishes.

After such a filling breakfast, we could only stomach a snack of veggie sliders and bite-size chicken at the Kalsa Pool Bar for lunch – and while the meat lacked spice, though it was tender and juicy, the flavour packed into the could-be-bland, grain-filled slider patties was admirable.

When we entered our first room on the second floor, there was a curious smell inside, almost like damp. However before we could even query it, our concierge immediately declared we couldn’t sleep there, and instantly called the front desk to arrange a transfer. Just 10 minutes later, we were whisked away to a new (pleasant smelling) room just doors away, where our suitcase was already waiting for us. Since the hotel is so new, some teething problems are to be expected, so we weren’t perturbed by the first room at all – rather, we mention this only to commend how efficient and focused the service was. 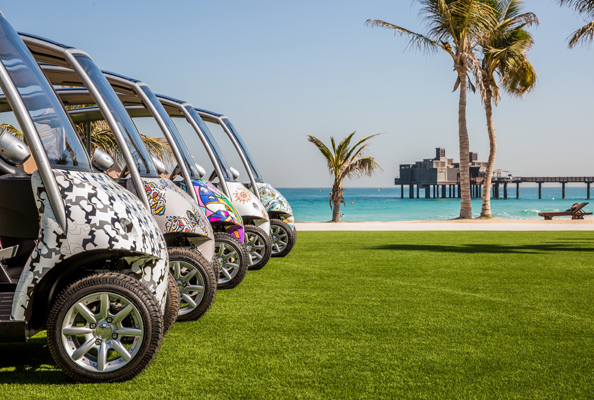 We also found the golf buggy service, which operates across the whole complex on a flag-down system, to be a little slow – but we’ve been told a new, Uber-like system for the transport is due to be implemented in a matter of weeks, so this won’t be an issue for much longer.

All in all, would we visit again? Most certainly – we’re already planning a two-night stay for the next special occasion we want to celebrate. Because, if you’re searching for a luxurious staycation that’s a little more understated than Al Qasr, but feels like an island paradise, we think this ticks all the boxes.