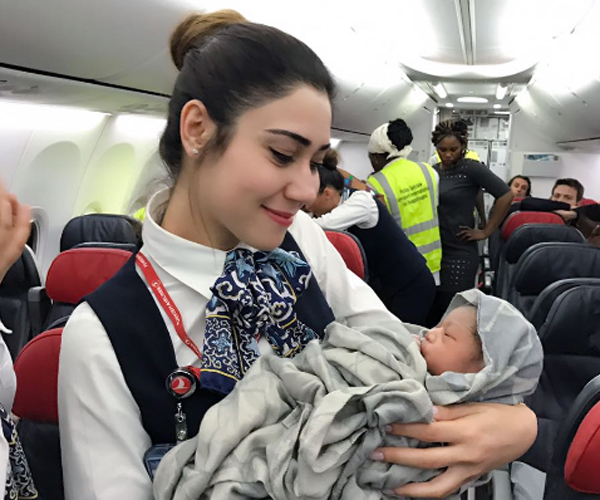 Airline staff and fellow passengers jumped in to help when a female traveller went into early labour on board a flight to Istanbul via Ouagadougou last week.

Mother Nafi Diaby, who was flying from the Guinean capital of Conarky, was 28 weeks pregnant when labour pains began to set in.

Read:
Ever Wondered What It’s Really Like To Be A Flight Attendant? Meet SkyFlyGirl…
This Saudi Blogger Isn’t Letting Islamophobia Stop Her From Travelling The World

Welcome on board Princess! Applause goes to our cabin crew! 👏🏻👶🏽 pic.twitter.com/FFPI16Jqgt

However, with the help of cabin crew, Diaby safely delivered a daughter, named Kadiju, 11 weeks early.

The mother and baby were taken to a hospital in the Burkina Faso capital when the aircraft landed, and are both reportedly doing well.

Read:
A Saudi Prince Bought 80 Plane Tickets To Transport His Falcons In Style
Flying Out Of Dubai Any Time Soon? Read This First…

“The cabin crew noticed that a woman passenger named Nafi Diaby, [who was] 28 weeks into her pregnancy, was suffering childbirth pains,” a Turkish Airlines statement said, according to the BBC.

“They promptly responded to assist her childbirth during the flight.”

“The mother gave birth while standing, and we received help from several other passengers,” the Turkish Airlines employee told India Today.

Women are allowed to fly up to the 35th week of their pregnancy, the Turkish Airlines website states, though expectant mothers need a doctors’ note to state they are fit to travel from 28 weeks onwards.