As the Middle East shows its solidarity with Brussels, following yesterday’s terror attacks – in the UAE the Burj Khalifa was lit in Belgian colours, while Queen Rania shared her sympathy on social media – Donald Trump has used it as an opportunity to further criticise Muslims.

Last night the Burj Khalifa in Dubai and the Capital Gate in Abu Dhabi were lit up in the colours of the Belgian flag as the UAE condemned the terrorist attacks in Brussels airport and metro station yesterday. 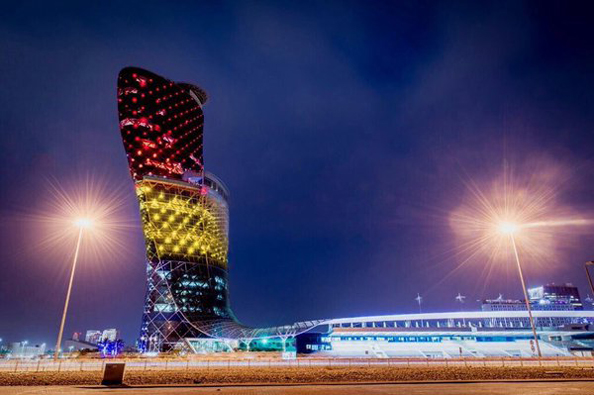 Dr Anwar Gargash, Minister of State for Foreign Affairs, also expressed that the UAE rejects of all forms of violence and terrorism. “Our hearts and concern is for the families of the victims of the terror attack in Brussels,” he said. “We feel their pain and vow to stand united with them.” 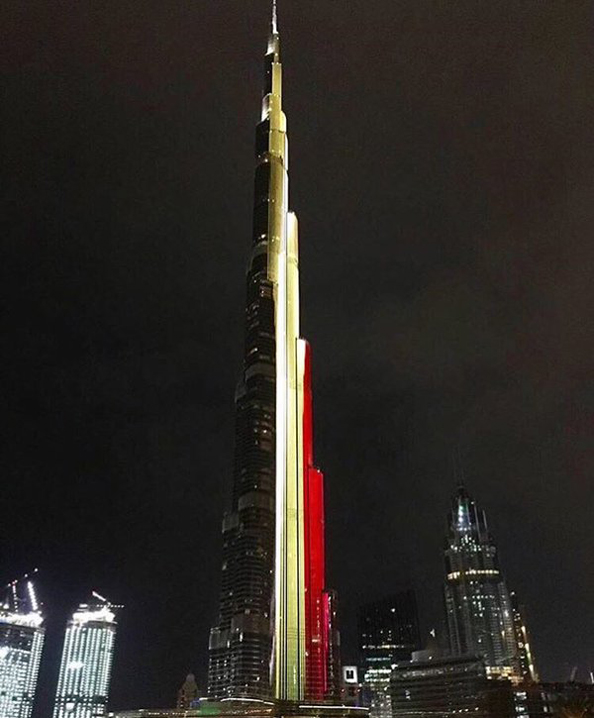 According to the Ministry of Foreign Affairs and International Cooperation, all Emiratis in Brussels are safe, but with security levels at a maximum, UAE nationals are advised not to fly into the country.

Elsewhere in the Middle East, Queen Rania Al-Abdullah of Jordan took to Twitter to express her support for those in Brussel, as well as Istanbul, following attacks there four days ago, commenting: “Terrorism has no faith and knows no boundaries. The horrific attacks in #Belgium and #Turkey show that terrorists are our common enemy.” 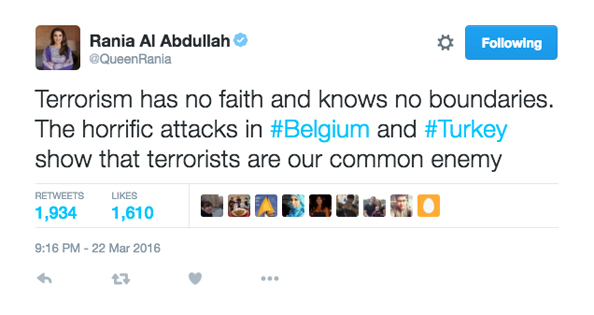 Unfortunately, while the world mourns, Donald Trump is using the recent events to help his campaign. He told Fox News: “We have a worldwide situation that is out of control.” He referred back to his previous call to “close up our borders” and stop to refugees entering the US from the Middle East. “It’s going to get worse and worse, because we are foolish, we are foolish.… We can’t allow these people, at this point, to come into the US.”

He also called his rival Hillary Clinton foolish for not thinking the same way, saying on Twitter: “Incompetent Hillary, despite the horrible attack in Brussels today, wants borders to be weak and open-and let the Muslims flow in. No way!” 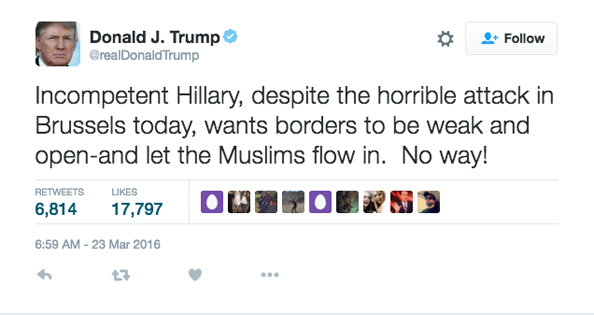 Following the attacks in Paris, Donald Trump’s figures shot up and it seems he is hoping the same will happen again. Democratic politician Bernie Sanders said in an interview with Jimmy Kimmel last night: “I think people get afraid, and for good reasons. ISIS is a disgusting, barbaric organisation. We’ve seen what they’ve done in Paris, what they’ve done in Brussels. People are afraid of an attack in the United States. But I think what we have to understand is we’re not going to undermine the Constitution of the United States of America in order to effectively destroy ISIS.”

“At the end of the day, we cannot allow the Trumps of the world to use these incidents to attack all of the Muslim people in the world. That is unfair,” he added. “To imply that if somebody is a Muslim they’re a terrorist, that is an outrageous statement.”

As Queen Rania aptly said after the Paris and Beirut attacks, #ThisIsNotIslam and hopefully the world will ignore the rash comments made by the likes of Donald Trump and look to the real problem – “terrorists are the real enemy.”