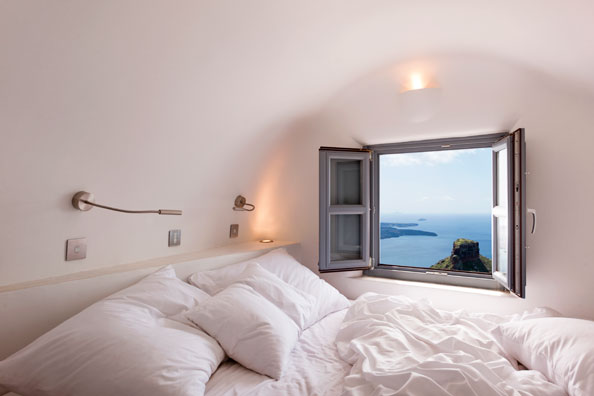 Not sure where to celebrate your first holiday together as husband and wife? Let travel experts Mr & Mrs Smith inspire you… 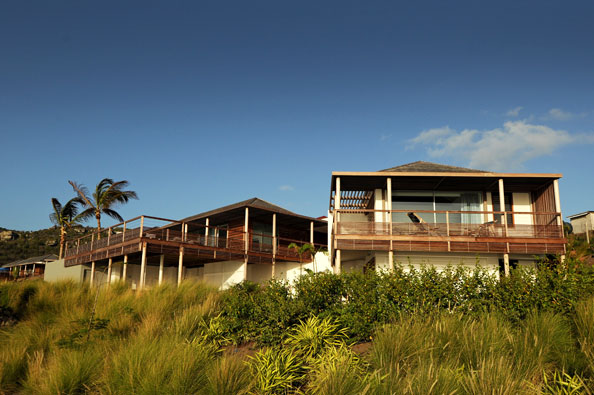 Join the turtles and tropical fish at Le Sereno’s coral-reef cove or take a dip at the freshwater swimming pool and, when underwater adventures pall, retreat to this handsome hotel’s Parisian-style rooms and restaurant, set on a sparkling stretch of St Barths sand.

Le Sereno hasn’t let all the sunshine and sea salt go to its head. Rather than trying to rival the overwhelming colour scheme of its scenery – jungle-green, glittering gold and vivid blue – the hotel’s interiors are as elegant and restrained as a Parisian pied-à-terre or a pearl-clad brunette. Bright white paint, caramel-coloured wooden furniture and flickering candles provide the main accents. Rooms are calm and collected, with gauze-curtained four-posters and not much else, bar billion-dollar views. 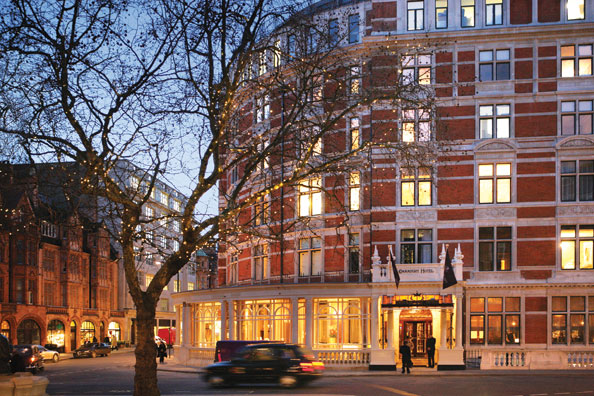 Style: Hip, but with history

The Connaught hotel was bound to be stately and stylish: it’s more than 100 years old, set in moneyed Mayfair and has the royal stamp of approval. Despite a recent revamp, old-fashioned values remain (English grandeur, top-notch butler service, antique furniture) but with modern frills added: flatscreen TVs above the baths, an indoor pool and the UK’s only Aman Spa.

Having explored all the hotel’s lures, set off on a jaunt. Dedicated fashion followers will love the city-central location: Christian Louboutin, Balenciaga and Marc Jacobs are the hotel’s Mount Street neighbours.

Before dinner, take the time to visit one of the hotel’s bars: pick your drinking den depending on your mood and outfit. The glitzy Connaught Bar, designed by David Collins, has smokey mirrors, Cubist-patterned walls and an award-winning bar manager, Santino Cicciari. Alternatively, sip at the Coburg Bar, styled by Parisian architect and designer India Mahdavi. This modern drinking hole has art deco chandeliers, black-and-purple velvet armchairs, panelled walls and bold black and white cameos. Style: Where the art is

Starck-designed Le Royal Monceau hotel, a Raffles outpost in Paris, knows a thing or two about art: it’s got a gallery, art-book shop and a dedicated art concierge.

Expect the same plush, duvet-like carpet, individual artworks and enormous beds in each room, but if you’re feeling loose of wallet, book the two-bedroom Ray Charles Suite on the seventh floor, and see the Eiffel Tower from the toilet.

For an afternoon of pampering, visit the all-white, Starck-designed spa, where one of the 12 ‘beauty coaches’ will create a customised blend of Clarins products for your skin on the spot. The spa is the biggest in the city, and boasts a hammam, laconium room and sauna.

There’s plenty to do in this French capital with the Champs Elysées right around the corner, but if it’s luxury boutiques you’re after then you needn’t leave the hotel, as Le Royal Monceau has recently opened: Le Royal Eclaireur, its own fashion store. At the end of the day, relax at Le Bar Long; pick one of the champagne cocktails and mingle. 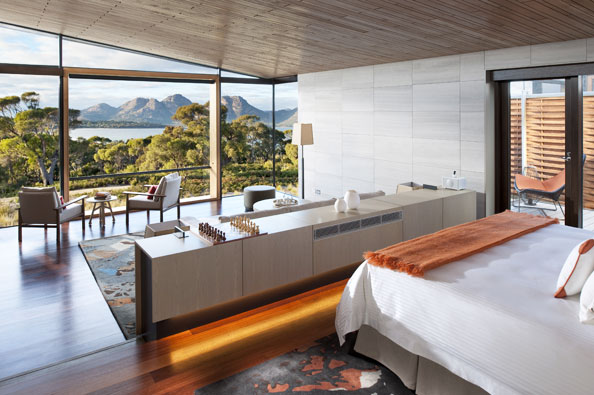 Hugging Tasmania’s pure shores, Saffire, a boutique hotel, is a natural gem with sunset-strewn beach views, sleek suites, tasty local seafood and a seductive spa. At first sight it resembles a close encounter with a shiny UFO, but this jaw-dropping, stingray-shaped sanctuary embraces the landscape, encouraging you to relax in style. Wineglass Bay in the Freycinet National Park is just minutes away and is considered one of the world’s most beautiful beaches.

If you fancy your own private courtyard plunge pool, then snaffle one of the four premium suites, which include spacious living and bedroom areas, a kitchen, dining zone and front deck. Saffire’s chef can even come and cook for you in-room. You’re given a free spa experience as part of your stay, so save time for a visit. The fun doesn’t stop at nightfall, when nocturnal wildlife safaris in the woods and star-spotting around the campfire come into their own.

If that all sounds a bit too energetic, then request a chilled-out gourmet picnic with a view of the Hazards mountain, take a dip in the ocean or just crash out in a double hammock and let the day drift by. 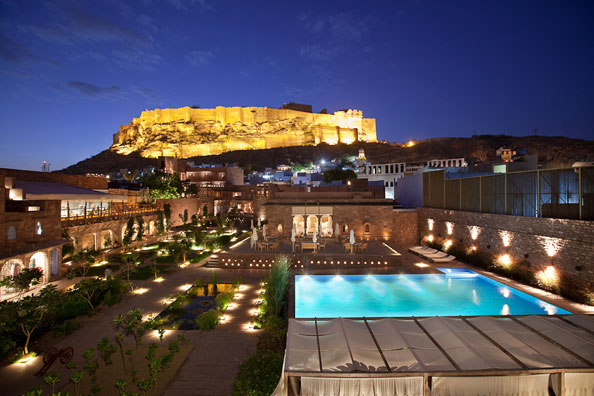 If Jodhpur’s ancient walled city resembles a circus with its vivid colours, roaming wildlife and the delighted squeals of children, then Raas Boutique Hotel is the troupe’s tightrope walker, a graceful retreat that treads a fine line between old and new. A butler-serviced pool and smart alfresco dining may speak of the Med, but the call to prayer from a nearby mosque is a soul-stirring reminder that you’re in the heart of Rajasthan.

Raas enables guests tap into the surrounding region with a choice of culture-laden experiences. Guided walks offer a gentle introduction to this intimate, yet frenetic, city, or if you’d rather zip around the streets, book the services of the hotel’s bespoke tuk-tuk

Slip into Serena Spa for downright delicious treatments that include a papaya body polish, Ayurvedic herbal scrub or honey-sesame session that’ll leave you smelling like a lovely chunk of halva.

At the heart of Yuzi Paradise – a thousand acres of manicured land – are the madly slanting grass-topped roofs of Homa Chateau. This eye-grabbing modern boutique hotel is both a shrine to art and a hymn to luxury, surrounded by a landscape jagged with limestone peaks and riddled with clear-water lakes.

Honeymooners and lovebirds should check into the spacious executive suite, which is split into two luxurious levels with mountain views on two sides, and features gorgeous artworks, a large corner Jacuzzi for romantic soaks, and a traditional Chinese day-bed.

You could quite easily spend the duration of your stay at Homa mesmerised by the sculpture park and surrounding scenery, but if you want to explore the region there’s no more inspiring way to do so than by taking a cruise down the Li River to Yangshuo – it’s a journey that has created its own category of Chinese painting. 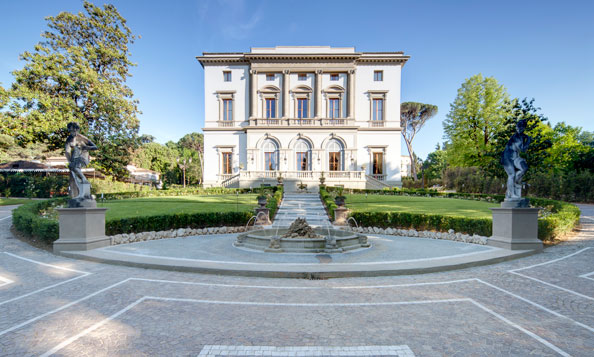 Style: Renaissance of a masterpiece

Built in the 1870s by Baron Oppenheim for his wife, Grand Hotel Villa Cora is a love letter in art and architecture. The massive heated outdoor pool – the only one in Florence – comes courtesy of the 21st-century renovation, as does the flawless service.

The Forties-themed suite on the fourth floor is the ideal honeymoon hideaway, and the private elevator-key access adds a VIP frisson.

Outside the hotel walls, the enchanting Boboli gardens and imposing Pitti Palace beckon. Of course, there are some things you can’t miss when in Florence; tourist tick-boxes include the Ponte Vecchio, Piazza della Signoria, il Duomo, San Miniato al Monte and Piazzale Michelangelo – all easily accessible from Villa Cora.

Have a romantic meal in the cosy wine cellar at Ristorante Boccanegra (www.boccanegra.com). Ingredients are top-notch and recipes traditional. 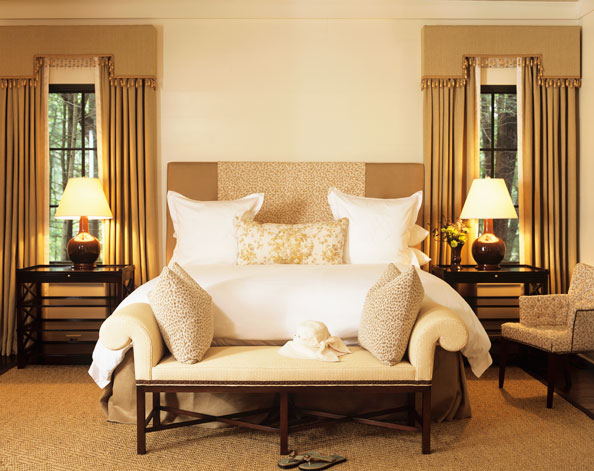 Gorgeous views, a patchwork of picket-fenced fields, sylvan countryside and a model home-on-the-farm feel – all the ingredients are there for a textbook rustic retreat, but Blackberry Farm ratchets the luxury up a notch with smart contemporary decor, bend-over-backwards staff and its own Lexus fleet – it’s back to nature with added bliss.

Our favourite rooms are by far are the Singing Brook Cottages, which are superbly spacious, pleasantly secluded and offer a gorgeous contemporary take on chic rusticity.

Outdoor pursuits are Blackberry Farm’s forte, and the Smokey Mountains are Tennessee’s own adventure playground. The hotel can arrange hot-air balloon excursions, horse riding trails, hiking, climbing, rafting, camping trips, stargazing with a professional astronomer and pretty much any other activity you can think of. For those moments when pampering’s preferable to pioneering, the Aveda spa, yoga classes and cooking lessons offer more demure diversions.

Since a stay at Blackberry Farm includes all meals (as well as the fact that the food is so unfalteringly delicious) it’s unlikely that you’ll need to venture elsewhere for sustenance.

Mr & Mrs Smith is a trusted boutique hotel expert and booking agent. The site provides more than 900 recommendations for intimate, hip and sexy properties around the world; the carefully curated hotel collection is anonymously reviewed by tastemakers, such as Stella McCartney and Cate Blanchett, who supply tongue-in-cheek, first-person accounts of their Smith-hotels stays.