Tod’s Announces First Stage Of The Coliseum Restoration Is Complete

Proving how dedicated and patriotic he is to his grandfather and father’s legacy and his Italian heritage, Tod’s chairman Diego Della Valle decided to change the face of philanthropy in Italy, starting with the mighty project of saving Rome’s most famous icon, the Coliseum. Now, nearly two years on, the company have proudly announced the first stage of restoration is complete.

In preserving the cultural heritage site with a restoration project that cost €25million, Diego Della Valle also, unintentionally, reveals the power of his brand, Tod’s – he insists the fashion brand gets no reward in the restoration, maintaining that his aim is purely “to restore to the Coliseum for patronage only, without any commercial purpose”.

The high-profile project saw most of the Coliseum covered with scaffolding since October 2013. But the crowds were ecstatic when the construction equipment was taken down to reveal how the façade of the famous arena had regained its original colour, proving how one of Italy’s symbols of culture is well and truly on its way to regaining its former glory. 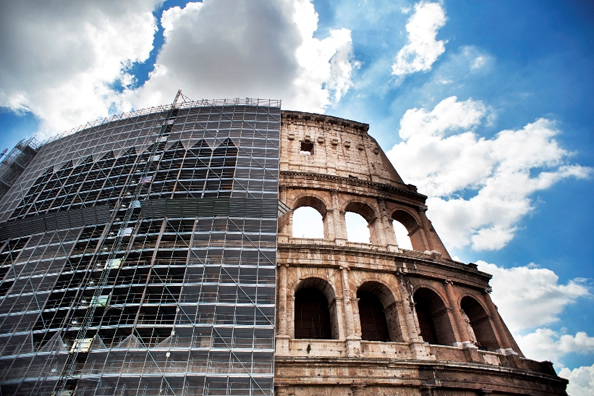 In an interview with Forbes’ Diego revealed his reason for taking on such a big role. He said: “In Italy, the culture issue is very urgent. Over 50 per cent of the world’s cultural heritage is in our country, but more than often it is left to decay. Besides being an important economic resource, we have the duty to protect this heritage for everyone.”

“My goal is to devote more and more time and energy to solidarity actions,” he added. “Competitive companies in the world have to give back some of the fortune they have achieved in their own country. It has to be an honour and a duty to intervene concretely helping as much as you can. There’s no need of big investments: if everyone could do something, it would be a great success.”

The restoration process has involved some of Italy’s best-trained professionals from archaeologists to specialised workers and restorers to architects and engineers. While this may only be the first stage of the process, the plan is to complete all the work by 2015.

Well, it certainly gets a thumbs up from us.