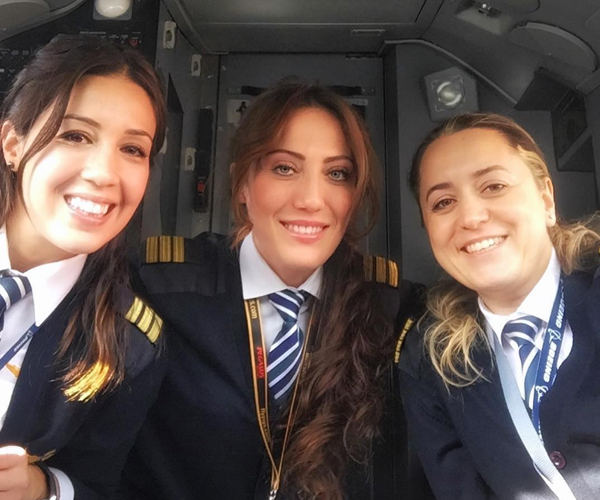 “A group of ground workers were staring at us like they’ve never seen girls fly before.”

Her Instagram snaps are enough to induce wanderlust in anyone, but this pilot also hopes they inspire fellow females to take to the skies.

Eser Aksan Erdogan, a 31-year-old aviator based in Turkey, has garnered more than 30,000 followers with her travel photography, which documents her trips from everywhere to Thailand, Jordan and Switzerland.

The greenest 💚 and happiest country in the world! 🇨🇷

As a pilot for Pegasus Airlines, the Dutch native has been cockpit-qualified for the last three years, routinely flying across the Middle East and Europe.

“Being a pilot was my childhood dream,” Erdogan told the Daily Mirror.

Read:
Meet The First Female Commercial Pilot From Dubai’s Royal Family
The UAE Gets Its First Female A380 Pilot

“I was kind of a tomboy so I always wanted to fly a F16, but since I’m against war, violence and armies, flying big jets is so much better.

“The eternal blue of the sky, fluffy clouds and the ability to visit countries far, far away have always had a big attraction for me.”

And with just an estimated 4,000 female aviators currently in the air (out of 130,000 pilots in total), the Boeing 737 master says she hopes her experience will convince more women to change the male-dominated industry.

However she’s honest about the downsides of the intense schedule demanded of pilots.

Read:
Why It’s So Important For More Women To Be Pilots
From Pilot To Wrestler: UAE Women Shattering The Glass Ceiling

“There have been days when I woke up and didn’t know my location for a minute,” she told the British newspaper.

“You will miss a lot of birthdays, special occasions and anniversaries, you will lose a lot of friends, but in return you get the most colourful, awesome job with lots of travelling – and did I mention you have the best office view in the world?”

Saying her favourite part of her job is that it “never gets boring”, Erdogan’s anecdotes almost have us Googling ‘pilot courses in Dubai’.

“You can see all kinds of beautiful things up there, like at night at 41,000ft when there is no moon you can see the Milky Way sometimes,” she said.

The pilot lists the Seychelles, Marrakech, Australia and Rio de Janeiro among her favourite destinations, and she tries to ordinate trips with her husband, an aviator for a different airline.

Erdogan, along with another female pilot, has also touched down in Saudi Arabia, a country where women are forbidden from driving cars.

“A group of ground workers was staring at us like they’ve never seen girls fly before,” Erdogan said.

“From the bottom of my heart I hope more girls would choose this career since it’s still a pretty much male-dominated industry.”

Best selfie with best Cpt. @volkan.gungor couldn’t resist sharing another pic of our flight together, we have probably an other million pictures left in the Gopro 😂✈️ we had two Gopro’s one pack of working batteries and just one sd card in total, so a lot of merging had to be done just to get one Gopro working! #aviation #avgeek #avporn #aviatrix #aviationdaily #boeinglovers #boeingpilots

Well, we’re nearly convinced to pack in the desk job…