This Saudi Couple Just Rollerbladed Down The Aisle… 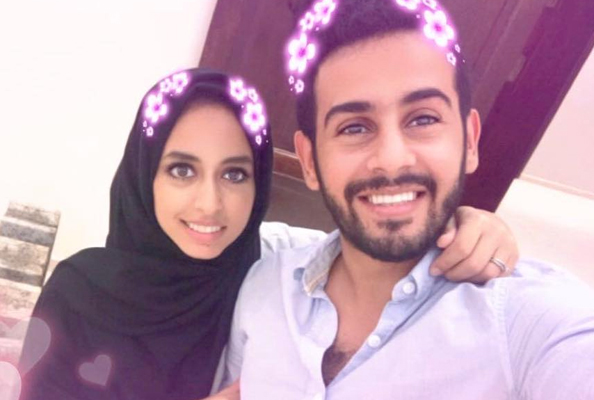 To have and to roll.

When it comes to finding ways to make a grand entrance on your wedding day, this pair most definitely nailed it.

Saudi Arabian social media star Hussein bin Mahfouz is a professional skater, so wanted to incorporate his passion into the ceremony.

He also wanted his future wife to embrace the idea – and embrace it she did.

Mahfouz and Hanan Al-Reemi both donned skates to walk down the aisle, in a move that stunned their wedding guests.

The pair’s mothers had initially tried to urge the couple to reconsider the unconventional footwear, “but Hanan is the kind of woman who says ‘Hussein… I’m with you’,” the groom told Sayidaty magazine.

“On the wedding day, I was surprised by my wife wearing roller skates and saying, ‘I want to share our memorable moments with everyone’.”

Mahfouz was inspired to pull off the move after seeing a similar skate-clad wedding in Paris back in 2012, before he’d even popped the question to interior design student Al-Reemi.

Luckily, his new wife was more than happy to go along with the idea, telling Arab News “this was our day and I decided to make my husband happy and the reactions were wonderful”.

Al-Reemi revealed she practiced walking in the skates in her wedding gown beforehand, saying “some of the guests were worried about how I would wear them and walk with the dress, but I managed to do so”.

The Jeddah-based couple shared images of the big day – and their bold footwear – on their social media accounts, with the snaps garnering tens of thousands of likes.

Read:
This Lebanese Designer Created A Wedding Gown Fit For A Brand-New Royal
This New Cafe Just Might Be Dubai’s Most Instagrammable Spot…

Mahfouz rose to fame with his skating tricks while competing on Arabs Got Talent in 2011 with his twin brother Hassan.