And the 29-year-old PhD student, who has travelled to tens of countries in recent years, certainly knows a thing or two about solo adventure.

The Saudi Arabian, who’s currently studying in London and pens a blog about her trips, hasn’t found it a necessarily easy route from wanderlust to wander-reality, however. 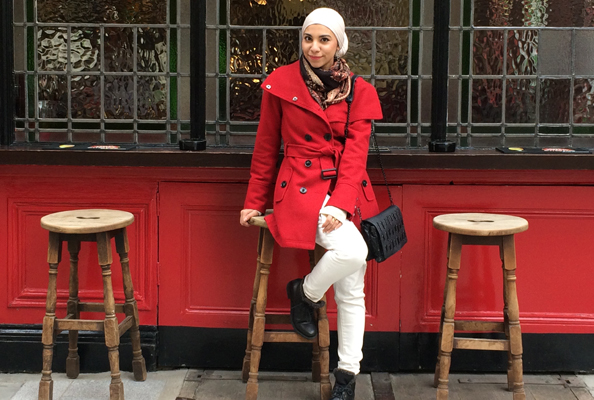 “When I brought up the subject my family was slightly apprehensive at first, but I have proven during my years abroad that I am independent and can be safe,” says Alhamal.

“It wasn’t all as easy as it sounds. I had to work really hard for these opportunities and privileges.”

These opportunities began when the blogger was awarded a scholarship from Saudi’s Ministry of Higher Education, which allowed her to move to the British capital in 2013.

Alhamal describes it as a “blessing” that she was able to move overseas, coming from a Kingdom with laws that make travel difficult for some women.

“It’s a matter of destiny, really, and which family you are born into.”

When your outfit matches the cool graffiti, a pic is a must! #designeresralondon 🖌🎉Artist: @fidget_one

The student has even turned her passion into her career, working as a travel presenter for a one-off show on English-language channel Ahlulbayt TV.

“When you wear a scarf you are a visual representation of Islam,” the hijabi blogger told The Independent last month. “You need to be even nicer than your usual self just to give an even nicer message. That can be exhausting sometimes.”

Read:
OK, We Need To Score An Upgrade To This New Way Of Flying
10 Times Arab Women Made Headlines In The Last Year

However, Alhamal says she’s yet to experience any real negativity while travelling in her headscarf.

“I usually research and ask some locals before heading to a new country to see how they would treat Muslims. I think it’s all about attitude and proper research.”

Alhamal likely won’t stop a fear of Islamophobia stop her from exploring a country, saying “the best way is to go and find out”.

“Most people won’t be rude if you are friendly (I hope).”

The traveller is prepared for backlash, however, and admits on her blog that she’ll sometimes cover up if she’s in a country where she’s wary of the customs.

“Sometimes when I go to new places and I am not sure about how people will react, I wear a woolly hat on top (if it’s cold) or do a stylish head wrap of some sort,” Alhamal says.

✨[New Video is Up!]✨ They say if you rub the toe, your wish will come true & mine did! A day later. Is there a connection? I wonder! New travel video from that day in Split is up! *link in bio* #designeresracroatia Photo By: my brilliant Split tour guide @vjeranmlacic

The student, who hopes to visit Greece, Portugal and Italy next, has several Middle Eastern destinations that she recommends other keen travellers should seek out.

“On top of the must-visit list are Iran (it has fascinating architecture and very welcoming people), Bosnia and Herzegovina (beautiful nature and delicious food), Sri Lanka (amazing beaches and very lovely people) and for something in the Gulf I would recommend Oman (best relaxed beaches in the area),” Alhamal says.

“The best thing that money can buy is travel. You will make lasting memories and even have international friends dotted around the world. Travel can be done on very tight budgets as well, so don’t let lack of money stop you.”

Nor should you let your clothing stop you, says Alhamal, who confesses she doesn’t understand “why the headscarf matters so much to everyone”.

“It’s only a piece of cloth that could hold a spiritual meaning to the person wearing it. At the end of the day, we are who we are and being different enriches our societies and the human experience.

“Let’s stand united with all our different looks and choices.”

Happy Monday from rainy London. I was working on my uni research and a big chunk of it is about Islamic patterns. I found this photo from Marrakech two years ago while I was selecting pix. #goodmemories #designeresratravels

– Research is key! I research the place I am heading to really well by reading the destination’s e-book and all relevant blog posts.

– The Instagram travel community is extremely helpful as well. Dame Traveler, Girls vs Globe and Girls Love Travel all have great resources and updated tips and tricks.

– Book everything in advance before a trip, such as accommodation and transportation. It might restrict you from being spontaneous but I think it’s better for safety because I give my family all these details before I leave,  just in case they need to find me.

– Don’t stay out later than 8pm unless you have company or a very safe route back to the accommodation.

– Don’t tell people your place of residence or that you are travelling alone. It’s important to be polite and vigilant.