UP Next
X
Need to elevate your winter wardrobe? We've found the season's...
Emma Day
October 29 2017

It’s the 30-day challenge to get a little bit fitter.

Read:
Princess Haya: ‘The UAE has never forgotten what it feels like to struggle’
You need to see these highlights from Fashion Forward’s stylish weekend

HH Sheikh Mansoor bin Mohammed Al Maktoum, brother of Dubai’s Crown Prince, has accepted his sibling’s call to work out for 30 minutes for 30 days, taking part in a fitness festival at Kite Beach over the weekend.

The royal got stuck into a tug of war during a weekend of physical activities held at the Jumeirah destination. 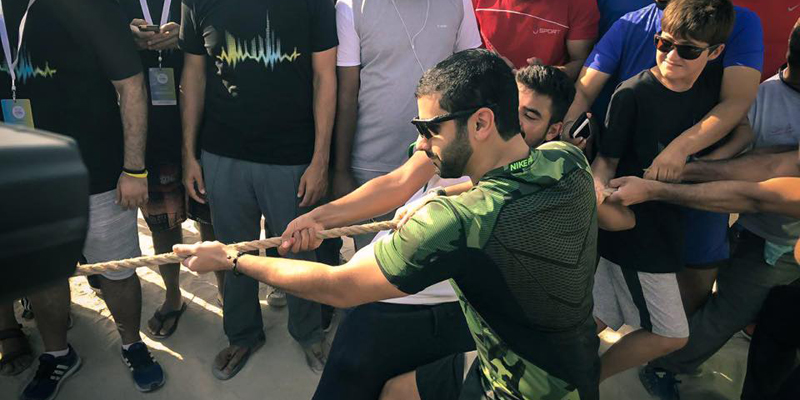 The sporty Sheikh Mansoor was thanked for his participation by Dubai Police, who’ve been making a concerted effort to get involved with the fitness challenge.

Earlier this month, officers hit the sand dunes for an intensive workout, while others have taken part in regular games of footy.

The 30 X 30 campaign will run from October 20 to November 18, in a bid to “turn Dubai into the most active city”, Sheikh Hamdan revealed earlier this month.

The goal is to encourage residents to get more physical “for a healthy and productive society”, the royal said.

“In the UAE, the people of determination are our inspiration,” he said on Instagram. “I want to see them join the @dubaifitnesschallenge, it won’t be the same without them.”

And his brother heeded the call, later joining para athletes for a series of sporting activities.

A post shared by Mansoor bin Mohammed Almaktoum (@mansoorbinmohammed) on Oct 26, 2017 at 8:58am PDT

Sheikh Mansoor isn’t the only royal to take up the challenge either, with Sheikh Nahyan bin Mubarak Al Nahyan cycling, skipping, doing push-ups and more in a video posted online.

“Thank you Sheikh Hamdan, we have accepted the challenge,” the Minister of State for Tolerance said in the clip.

The minister was spotted at a spin class in a video posted to his office’s YouTube page.

Mohammed bin Zayed Al Nahyan, Crown Prince of Abu Dhabi, was also captured getting his heart rate up with a cycle, as pictured by Sheikh Hamdan.

Want to get involved? There’s a website where you can register, which also houses plenty of tips for working out at home.

For more information about the initiative, check out dubaifitnesschallenge.com.