This Lebanese Man Just Popped The Question At 36,000 Feet… 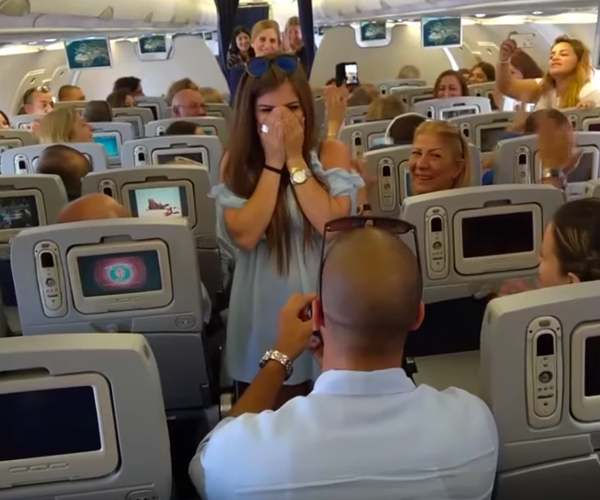 We’re big fans here of epic proposals, and one man just went higher than most – quite literally.

Beirut-based Jack Sepilian got down on one knee on a recent Middle East Airlines flight, heartwarmingly echoing the way he first met his new fiancee, Sarin Aynedjian.

Two years ago, Sepilian had been flying back to Lebanon from Armenia following his father’s death, where he met Aynedjian, who’s originally from Yerevan.

“As I was flying back from there I met a woman who changed my whole life – and that person is Sarin,” he explained to a rapt cabin last month, after calling for passengers’ attention.

Standing in the aisle of a MEA flight bound for Armenia, Sepilian recounted meeting Aynedjian to the cabin, after asking her to stand up to a round of applause from fellow travellers.

“My business improved greatly and my financial situation became much more stable – it was as if God had sent me an angel from above.  That’s why after two years, during the same month we met, we are heading to Armenia to celebrate our second anniversary,” he told fliers.

After getting Aynedjian to join him in the aisle, Sepilian dropped to his knee in front of his astounded girlfriend, who quickly said yes.

The couple later revealed in a Facebook video shared by MEA that the airline has offered them free tickets to a honeymoon destination of their choice to celebrate.

Read:
This Dubai-Based TV Host Shares The Secrets Behind Her Three Bridal Beauty Looks
The Work That Went Into Creating This Qatari Princess’ Wedding Dress Is Next Level

(MEA fly to locations including Australia, New York, Venezuela, and France, so we’re sure they’ll have a pretty hard time whittling down which romantic spot to choose).

Now, we’re just off to fix our panda eyes after watching that video…