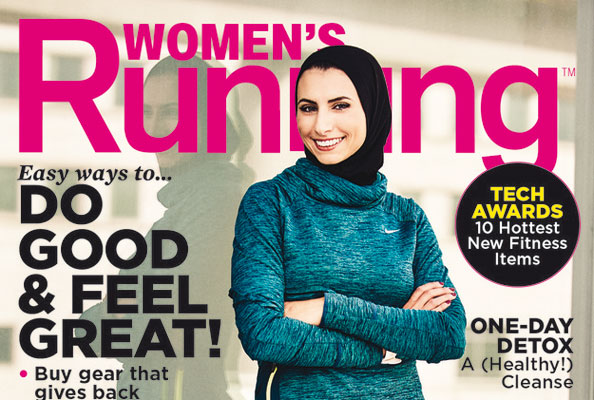 Mother, marathon runner, triathlete… and now Rahaf Khatib has a new accolade to add to her list.

The amateur sportswoman has just made history as the first hijab-wearing cover star of a US fitness magazine.

The mum-of-three, who is based in Michigan in the United States, said she hopes her feature will inspire other Muslim women to take up running.

“I feel like [other] covered women maybe are hesitant to get out of their comfort zones,” the 32-year-old told the October issue of Women’s Running magazine. “Maybe it’s a lack of apparel out there; maybe it’s all the negative press about Muslim women.” 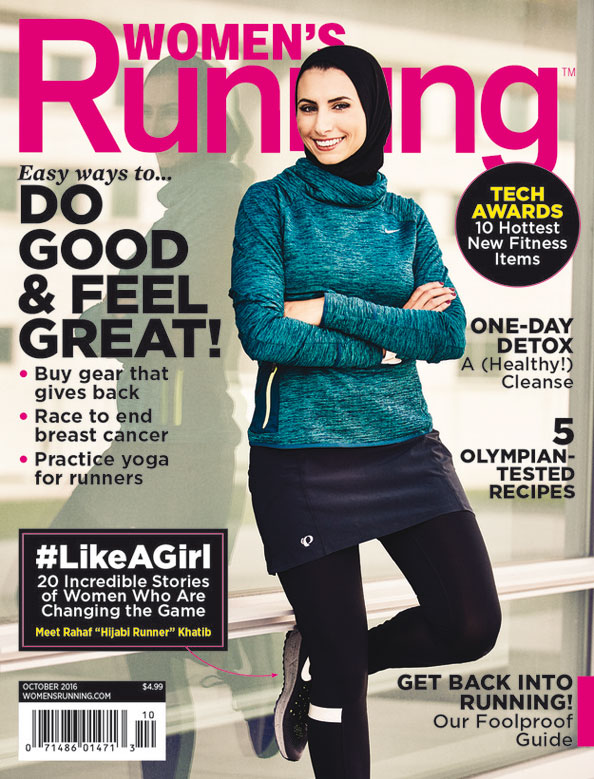 Read:
Muslim Designer Makes History With All Hijab-Collection
This Saudi Teen Is Campaigning To Introduce A Hijab Emoji
Beauty Blogger Sparks Debate By Donning Hijab In Eid Tutorial
5 Most Common Stereotypes About Women Who Wear Hijabs

Khatib, who is originally from Syria, only got into running in 2012, but has since managed to complete a whopping five marathons – and is about to tackle her sixth.

And she’s as passionate about breaking down preconceptions as she is about pounding the tarmac, setting up the Instagram account Run Like A Hijabi to encourage other women in traditional dress to take up the sport.

Khatib describes her mission as to “defy stereotypes and encourage my Muslim sisters”, and she initially reached out to Women’s Running herself.

16 miles done! ✔️ Due to #dhulhajj, a religious holiday in which #muslims perform the #hajj, I’ve been fasting on and off. Yesterday since I wasn’t fasting, I decided to run my long run I knew I wouldn’t have a chance on the weekend. I ran 6 miles, then after few hrs, I ran 10 more miles. All on treadmill. You do what you gotta do in the name of training! 🙌🏼 It had to be done this way due to my circumstances. And my kids are off for #eid Monday and Tuesday 😳 AlHamdillah this is my LAST long run over 10 miles! 15 Days left! #runlikeahijabi #mommyrunner #fasting #hajj #muslimrunner #coveredrunner #mashallah

“She emailed us citing a lack of Muslim hijabi women represented in women’s magazines and challenged us to change that. We couldn’t help but hear her,” editor Jessie Sebor told BuzzFeed.

The cover has been widely praised on social media, and the self-described “average” runner says it “means the world” to her.

“It’s something I can show to my kids in the future, my community and most importantly my parents. It means that my sweat, tears and training are worth it.”

That sweat is something Khatib says she’s often quizzed on, citing “don’t you get hot?” as the question she’s most asked.

Read:
Hijab-Wearing Fashionistas You Need To Follow On Instagram
Meet The Ice Princess In A Hijab Determined To Make UAE History
Dolce & Gabbana Launches Its First Line Of Hijabs & Abayas
#RockTheAbaya? These Women Certainly Do

143 miles for August. Not my best mileage wise, the heat and humidity did slow me down as expected. September will be better Inshallah. With so much exciting stuff to come for #runlikeahijabi. STAY. TUNED. @nikerunning @nikewomen @womensrunningcommunity #instarunners #icover @worlderunners

“I respond, ‘If it’s hot outside, you’re going to be warm regardless!’ I don’t mind at all—I’m just being me. I’m in my zone and I don’t notice what’s on my head or anything else,” she told the magazine.

“If you see anyone who looks like me, please don’t rely on your assumptions. Ask them questions. Smile and offer a nice word.”

Feeling inspired to work out in your headwear now? Khatib has one final message for you.

“Don’t be afraid of how you’re going to be perceived. That should be the last thing on your mind. Go out there and do your thing.”