This Emirati ice skater is hoping to create another UAE first… 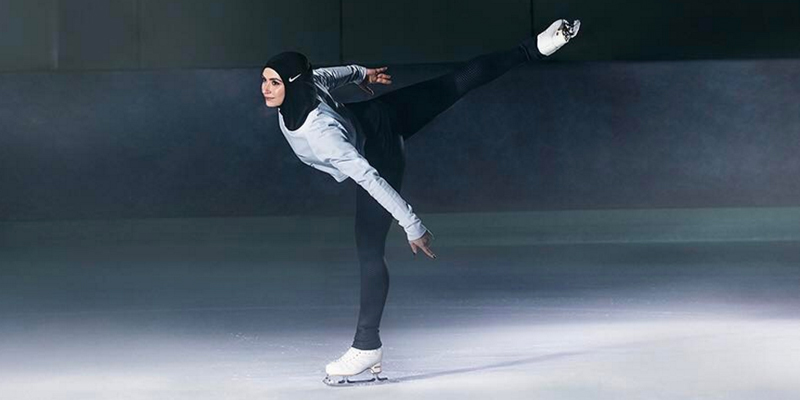 Hijabi athlete Zahra Lari has her eye on a spot at the Winter Olympics.

She’s been nicknamed the “Ice Princess in a Hijab”, but could she soon be the Ice Princess with a gold medal around her neck?

That’s Zahra Lari’s goal, as she embarks on a mission to become the first Emirati athlete to represent the UAE at the Winter Olympics.

Read:
Sheikh Mohammed and Princess Haya help organise aid for refugees
Saudi just allowed women into this stadium for the first time ever

The 22-year-old – who is already known as the Emirates’ first and only figure skater – jetted off to Germany this week to compete in the Winter Olympic qualifiers, revealing she’s “so close now to my goal”.

“And when it gets tough I think of the word Olympics and what that means for my family and nation and that clears my vision and helps me focus on the goal,” Lari said in a statement.

Participating in the Winter Olympics, which will take place in South Korea next February, has been the Abu Dhabi skater’s dream for years.

“My ultimate goal has always been to compete in the Winter Olympics,” Lari, who first stepped out on to a rink aged 11, said.

Small clip of my program for the opening ceremony at the Skate Emirates 2017!! #adfbma

“When I look seven years back, I remember training being pretty hard and lonely sometimes. It was all about my will and not giving up. Now people know me and know my story so I have their support.”

Lari, who trains between four and seven hours a day, was first inspired to take up the sport after watching Disney’s Ice Princess.

“When I told my mom I wanted to try figure skating, her first words were, ‘no, your grades are going to drop and it’s dangerous’,” Lari told Nike in a campaign this year.

“Obviously, I went to my dad next, and my dad was like ‘yes, sure’ and took me to the ice rink for the first time.”

However it hasn’t been an easy road to success, she admits, revealing when she first started competing she used to have points deducted due to her hijab.

“They [the judges] had never seen covered skaters before, but after holding several meetings, I am now proud to say that hijabi women can skate free of fear,” she said.

And her Winter Olympics bid isn’t the only reason Lari’s been making headlines this year – the athlete appeared in a campaign for Nike’s barrier-breaking sports hijab back in March.

The modest sportswear product will be released for general sale in spring 2018, though Lari will wear it for competitions prior to its launch.

Lari has previously said she wants to be seen as not just a role model for people from her own country, but a pioneer for Muslim girls all over the world.

“People may think or tell you that you can’t do certain things, but I’m going to show them you absolutely can. I am covered, I am Muslim, I am from a desert country and I’m doing a winter sport. It’s fine to do what you love.

“My family is behind me, my country is behind me – and there’s no reason why I can’t achieve what I want to achieve.”