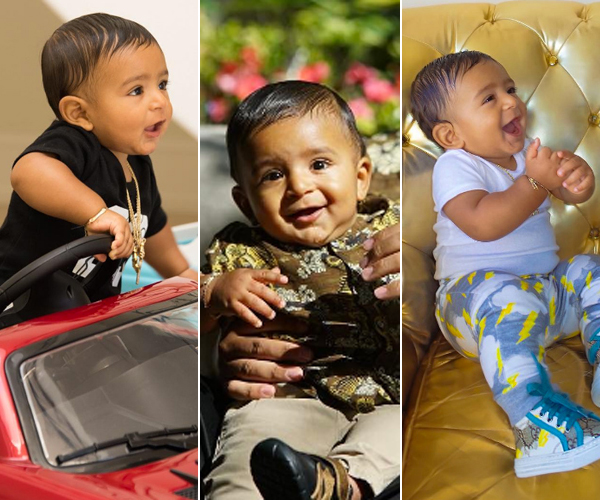 He’s an executive producer, a cover star, a friend of Rihanna… and he hasn’t even celebrated his first birthday.

Who do you think will be running the music business in 50 years? We’d put our money on Asahd Tuck Khaled.

At just eight months old, the son of Palestinian-American record producer DJ Khaled is quite the mogul-in-the-making, with credits on an album, a billboard in New York City, and regular appearances on TV.

The super-cute tot, who’s been described by DJ Khaled as the “biggest blessing I’ve ever had in my life”, is being primed to follow in his famous dad’s footsteps.

Thanks auntie @missinfo I so needed the headphones uknw daddy surprised me and brought me on stage! #Repost @missinfo (@get_repost) ・・・ Peak #rapdad moment! The homie @djkhaled w/ his exec producer @asahdkhaled on that BET stage. And Asahd is wearing the #BabyBanz ear protectors that Auntie Info gave him Father x son’s 1st album #Grateful is

Asahd – whose mum is clothing line owner Nicole Tuck – has been named as an executive producer on Khaled’s latest album and regularly hangs with music’s biggest and brightest names.

Read:
Our Favourite A-List Gowns By Arab Designers From 2017 So Far…
Dubai Has Just Been Ranked As One Of The Top 10 Places In The World

Will he soon be one of them? Well, here are just some of the reasons this tot’s one to watch…

He has his own Instagram account with one million followers (although we’re almost certain he doesn’t manage it with those tiny little fingers):

His cherubic little face is all over his dad’s tour bus:

Daddy @djkhaled I can’t believe it’s me on the side of your tour bus ! It’s amazing! ☺️❤️

And a billboard in Times Square:

Having a busy day me mommy and daddy rang the bell at #NYSE this morning with @getschooled!! #grateful june23

He hangs with RIHANNA:

He has a better wardrobe than most adults:

He appears on TV talk shows:

Me and my daddy were on @livekellyandryan this morning! thanks for having us!!! #grateful june23

He drives a better car than us:

I had to lean into that turn lol #grateful

He’s already been onstage at the BET Awards:

He has matching shirts with his dad:

Me and my daddy ! Mommy got us matching shirts .. thank you mommy

He travels by private jet:

Getting ready to go again you ready this time daddy?? @djkhaled @jetsmarter @kamalhaute

Nicki Minaj tweets about him:

I told daddy when @nickiminaj held me the first time at 3 weeks old that Nicki was my future wife!! Xoxo

He’s got a killer collection of kicks:

Read:
This Hijabi Style Icon Is The Star Of Dolce & Gabbana’s New Campaign
Beyonce Just Can’t Get Enough Of This Dubai-Based Maternity Label

Me and my daddy on that XXL cover thanks to @travis_shinn for capturing such a great pic!! Gotta read this article we discuss me being executive producer of daddy’s album #grateful #didthedrakevocalscomeinyet let me confirm YES VOCALS ARE WIT ME !!! #movie @champagnepapi

He gets parcels from Kim and Kanye:

Thanks auntie @kimkardashian and uncle @kanyewest for my exclusives!!! Can’t wait to wear them!! Xo

He chills with Biebs:

@justinbieber and I were discussing me being executive producer of his album! Daddy said slow down asahd!! @djkhaled

And, most importantly, he’s definitely the apple of his father’s eye.

#GRATEFUL fan luv PLEASE make my first endeavor #1 on BILLBOARD!!! PLEASE support click the link in my bio to purchase my first executive produced album grateful!! I love u so much @djkhaled ❤️