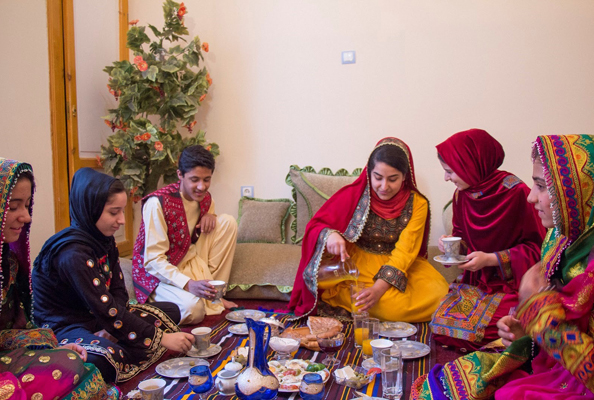 The talented teens cried when their dreams were crushed by immigration officials.

They made a 1,000-mile round trip to try and secure a week-long visa to visit the US.

However these Afghani schoolgirls were left “crying all day” after their applications were denied.

The six-strong team had hoped to represent their country at the inaugural FIRST Global Challenge, a robotics competition set to be held in Washington DC later this month.

The girls’ creation had already been shortlisted to compete in the event, but now they will not be allowed to accompany their masterpiece.

The young inventors, who attend high school in the city of Herat, had to visit the US Embassy in Kabul – 500 miles away – twice to try and secure seven-day visas.

But the team were turned down after a series of interviews.

“We want to show the world we can do it, we just need a chance,” 14-year-old team member Fatemah told Forbes.

The girls will now have to watch their ball-sorting robot compete against 163 other machines via video conferencing.

The US State Department hasn’t commented on the team’s visa situation due to confidentiality reasons, however Forbes notes that it’s historically difficult to secure the B1/B2 business travel visa from Afghanistan.

Read:
10 Reasons You Should Follow HH Sheikh Mansoor On Social Media
Here’s Everything You Need To Know About Rihanna’s New Saudi Beau

“I wanted this to happen badly, I really did,” First Global President Joe Sestak said in a statement. “These girls are courageous.

“I was going to be so proud when I watched these young, brave Muslim girls lead the 164 nations’ teams into Constitution Hall, the Hall of “We the People” here in America.”

Teams from Iran, Syria and Sudan have been able to secure permits to travel, with Afghanistan and Gambia currently the only competitiors denied visas.

“The first time [they were rejected] it was very difficult talking with the students,” tech CEO Roya Mahboob, who put the Afghani team together, told Mashable. “They’re young and they were very upset.”

Despite the disappointment, however, the girls are still excited to take part in the global competition.

“The girls, they’re showing at a young age that they can build something.”