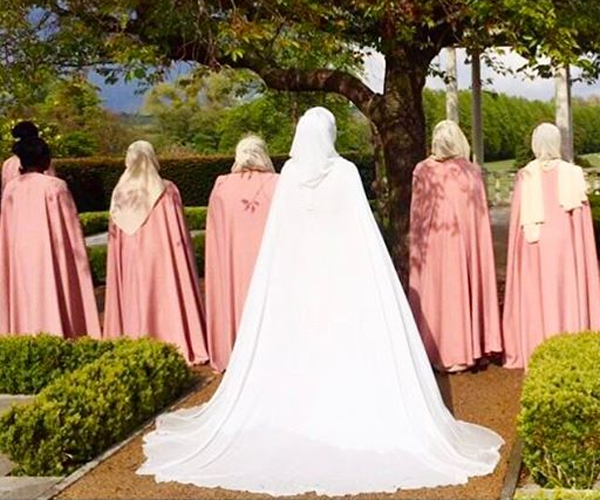 In need of some modest sartorial inspiration for your wedding? Look no further…

When we spied the shots from this wedding on Instagram, we knew we had to get in touch to pick the bride’s stylish brains.

Londoner Alimah Sitta tied the knot in the UK’s Hampshire last month, with her wedding party clad in a custom-made capes that beautifully blend the modern and the modest.

The regulations manager admits she wasn’t sure about how the style would go down with her bridesmaids, but was thrilled with the eventual result.

Read:
The Work That Went Into Creating This Qatari Princess’ Wedding Dress Is Next Level
This Dubai Couple Booked Out An Entire Cruise Ship For Their Wedding

“I wasn’t sure about the cape idea on everyone at first but I was proven wrong! My girls looked amazing!” Sitta wrote on Instagram, alongside a shot of the group rocking their capes and hijabs.

The stylish result has since seen the wedding featured in magazines including Vibe and Essence as well as several blogs.

Sibling love, minus one 💖 Your siblings are your God given besties. I got a good pick of the bunch with these two! Missing my big sis who was probably busy with my cheeky nephew! #lovethem #family #siblings #bigbro #babysis #love #bond #talls #amazonian #canyoubelieveimtheshortest #triplethreat #weddingday #lookslikeafakebackground

“The bridesmaid cape idea came from one of my close friends and bridesmaids, Basirah,” Sitta told Emirates Woman.

“I wasn’t sold on it initially as although I wear cape coats [and] blazers very often, I wasn’t sure it would suit everyone on my bridal train. I did love the image her inspiration came from, however, and initially wanted one made for myself too! It turned out to be an amazing set of dresses which ‘broke the internet’.”

Aso ebiiiiii!!!!! 💖💖💖 When the bridesmaids come through with the aso ebi of life! The cousins represented that native like true Yoruba demons o! @bigmanyus looking like the master of ceremony!! And hubby and his brothers rep’d like kings in their agbada! Ayyy see culture!! Shout out to @adotcomedian for being the best MC ever!!! #twoweekanniversary #wedding #weddingparty #weddingguest #nigerianwedding #yorubademons #godforbid #asoebi #fortheculture #britishafricans #britishnigerians #gele #lace

The bride rocked a white lace number from Justin Alexander with an added cape, followed by a modern take on a traditional Nigerian design, and finally another custom-made gown.

“The cape idea for my [first] wedding dress actually came as a result of my original idea not going to plan,” says Sitta.

Read:
Dubai Couple Throw Pre-Wedding Bash At The Burj Khalifa… And The Burj Al Arab
A Saudi Teen Asked Her Dad What He Would Do If She Took Her Hijab Off

“I had a big tulle skirt with missing front panel made, but it did not look anywhere near as great as I had envisioned so I decided to get a dramatic cape instead. I wanted something that represented my style – glamorous but modest. The dress itself was heavily beaded adding the glamour and the cape, while being dramatic, was also understated and allowed me to be modest as it covered the more shapely parts of my figure in the dress.”

The fashion-forward bride also altered the original gown to make it more modest, adding a blouse to the sleeveless V-neck silhouette, and even designed her two other dresses.

“I designed the [second] look as a modern version of the traditional iro and buba, which is a wrapper and loose fit blouse worn in Nigerian culture,” Sitta says.

“I made a fitted blouse with large bell sleeves instead as I wanted to be able to wear the blouse again, and I am currently loving big bell sleeves.

“The final dress was designed by myself using fabric I had shipped from a friend’s store in Nigeria. I decided to team it with a turban as I love wearing my hijab in a turban style at times; though usually my neck and ears are completely covered.

“I also wore a netted petticoat underneath to give it that princess style finish since my wedding dress was straight cut.”

Final change!! 💃🏿When you are determined to wear your third and final dress!! I tried to represent all aspects of my style by finishing off with my high turban! My cousins fully gassed me with those snaps though! Make up by @vintagebrowne Dress fabric via @nothingbuhfabrics #sideprofilinghubby #finalchange #princessdress #wedding #walimah #partytime #tailormade #turbanista #sometimesturban #notjustthatday #actionshots #dreamwedding

Sitta revealed her wedding guests were “blown away” by the looks on the day.

“People constantly complimented the outfits… and the reaction to pictures on social media has been so humbling. I wasn’t expecting any of it!”

Sitta, who met her now-husband through a mutual family friend last year, revealed the highlights of her wedding day were signing her nikah papers, seeing all her loved ones in one room, and the groom’s “amazing” speech.

OK last set, I promise!!! Just a final shout out and thank you to all our guests for coming to our intimate dream wedding!! Here’s a small selection of photobooth pics! So much love for all my amazing friends and family. Where love is given, it is received – another lesson of the season! ❤️❤️❤️ Booth via @fpbooths #photobooth #weddingday #weddingpictures #fun #friends #selfies #family #travelfriends #cousins #guests #from #texas #qatar #nigeria #mua

For fellow Muslim women looking for bridalwear that reflects their taste and respects their faith, Sitta urges them to “be true to your style of modesty”.

“I often see brides who take off their hijab completely on the day or wear a dress that is more figure hugging than usual; you don’t have to,” she says.

“Modest fashion is so versatile. Just be creative and you never know what amazing looks you may come up with! Try not to compromise but also do make an effort to fulfill your dreams as you will only get to wear something like this on one day.”