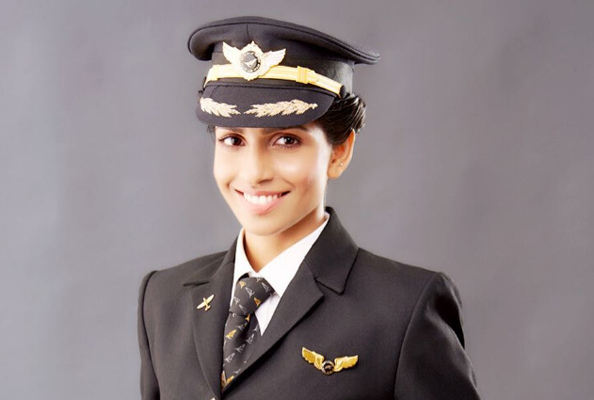 “A lot of people were telling [my parents] not to send me for flying lessons.”

She faced plenty of resistance on her sky-high journey, but one Indian pilot has proved her naysayers wrong by claiming a global title.

Anny Divya, a 30-year-old who works for Air India, has become the youngest ever woman to captain a Boeing 777, according to reports.

The Air India aviator took command of the world’s largest twin jet earlier this year, but there was plenty of turbulence on her career path.

Read:
These Bollywood Legends Just Did Dubai In Style…
When This Couple Were Stranded, One Kind-Hearted Emirati Stepped In To Help

“Luckily my parents have been very supportive, even though a lot of people were telling them not to send me for flying lessons,” Divya told Indian TV station Mirror Now.

“There was a lot of resistance all around – especially the fees, which were a lot for [my parents] to pay at that time.”

However the pilot, who hails from Vijayawada, persevered, enrolling in flying school in India aged 17.

Divya graduated aged 19, and has been working at Air India since 2006.

She revealed she previously turned down the chance to fly a Boeing 737 in favour of the larger 396-seat Boeing 777, saying “it’s the plane I always wanted to fly”.

Read:
One Indian Airline Has Created A New Service For Solo Female Fliers
14 Of The Best Travel Hacks That Will Make Your Holiday A Breeze

The pilot has since earned a BSc degree in aviation, and used her salary to help support her siblings’ studies and buy her parents a house.

“I fought hard to achieve my dreams,” she told Mirror Now, urging other to follow in her footsteps.

“All women should pursue their dreams, especially right now.”