These Bollywood Legends Just Did Dubai In Style… 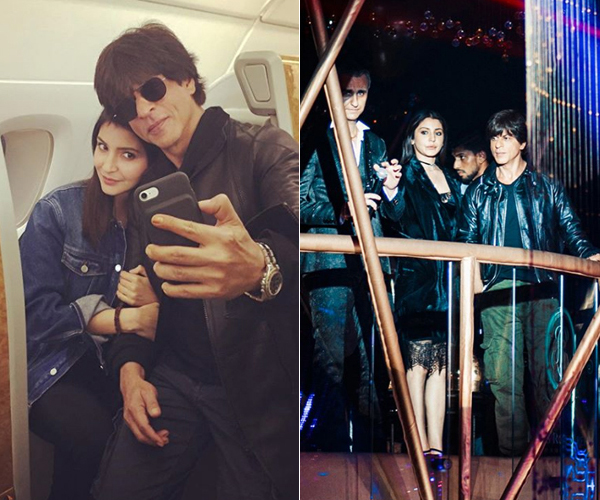 “Dubai is my city,” Shah Rukh Khan told thousands of fans as they packed out a Deira cinema – before hitting a club.

He’s one of the city’s tourism ambassadors, but when Shah Rukh Khan’s in town, he is one of Dubai’s greatest attractions.

The Bollywood legend jetted into the UAE over the weekend (via an Emirates first class cabin, it appears), as part of several scheduled promotional appearances for his latest film, Jab Harry Met Sejal.

The Indian actor was joined on the trip by costar Anushka Sharma, and the two visited Vox Cinema in Deira and Dalma Mall in Abu Dhabi to greet thousands of screaming fans.

Read:
When This Couple Were Stranded, One Kind-Hearted Emirati Stepped In To Help
Michael Cinco Just Gave His Niece The Best Wedding Gift…

The pair first dropped in to the Deira theatre, where they were swarmed by admirers as they walked a red carpet through the city centre mall.

The two also spoke on stage and performed a few moves from their romantic comedy, which is due to be released at cinemas on August 3.

Fans had waited hours for the stars to arrive, with the appearance scheduled for 1pm but not taking place until gone 4pm.

Not that the crowds minded, judging by their greeting:

At the accompanying press conference, Khan – who has a home in Dubai – revealed where he’d take Sharma’s character in the film if she were ever in the city.

“Dubai is my city,” the star said, according to Khaleej Times.

C u today at Vox Cinemas- Diera City Centre, Dubai & Cine Royal, Dalma Mall, Abu Dhabi. It’s nice to be here & to meet as many of u as I can

Read:
Five Foundations That Really Won’t Budge During A Humid Summer
OK, This Might Just Be The ‘Coolest’ Thing We’ve Seen In Dubai

The duo later travelled on to the capital, where they greeted film fans at Dalma Mall, with thousands lining the roads outside and the mall itself.

And, despite Khan telling fans at the Deira cinema that Sharma was an early-to-bed type, revealing she usually retires by about 8pm, the pair made an exception that night.

The two were captured cutting some moves at Dubai’s Cavalli Club in the wee hours of Sunday (as you’d expect of two Bollywood pros).

Khan and Sharma later departed Dubai for India, where they greeted thousands of fans in Varanasi.

Harry, Sejal & Imtiaz had a great time in Varanasi… thank u all for coming & big thanks to Manoj Tiwari. #JHMSInVaranasi @anushkasharma @imtiazaliofficial @redchilliesent

Did you see the pair in the UAE? Share your story in the comments below!