The Round Up | Milan Fashion Week A/W13 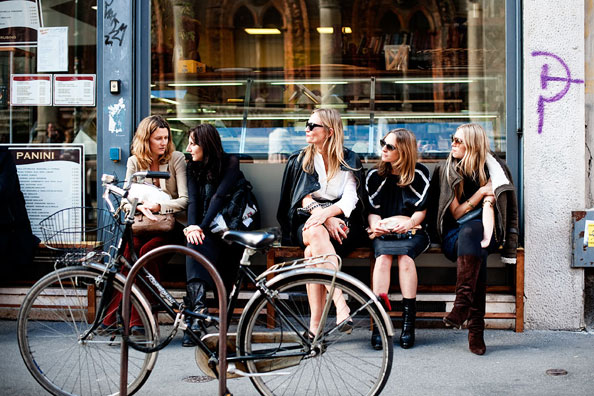 The fashion savvy took Italy by storm as Milan Fashion Week held its own against its international rivals with shows that proved bigger and better than ever. Alberta Ferretti and Gucci kicked off the week with Ferretti keeping it demure with long hemlines and high Edwardian inspired collars. 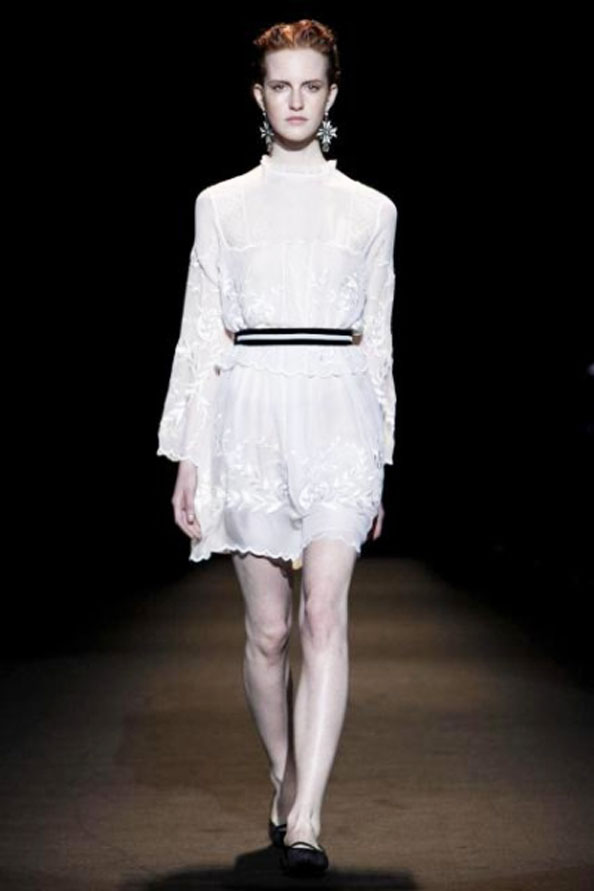 Bursts of colour gave the ladylike collection a lift while fitted jackets, cinched in at the waist, showed off the skater skirts to their full advantage.

Over at Gucci, Frida Giannini treated the audience to a walk on the dark side with a vampy collection that saw figure hugging dresses and pencil skirts celebrate curves.

Exotic skins galore, the jewel toned hues were a pleasant contrast to the super-slick hair and smoky dark eyes. With the bar set high by these two heavyweight Italian designers, it was clear that it was to be a week to show the world that Milan means business.

Karl Lagerfeld created a buzz with a Fendi collection that was fur, fur and more fur. Issuing the bold statement ‘Fendi is fur! Fur is Fendi!’, the runway was unapologetically flooded with mink and fox in natural tones with pops of pink, orange and electric blue.

Fur adorned everything from the quirky cartoon clutch bags to sunglasses as models strutted down the catwalk to Prodigy’s Firestarter, complete with fur Mohicans. Texture was key with braiding and ruffles providing dimension, making Karl Lagerfeld’s latest collection one of the most talked about of the week.

The award for the most dramatic show goes to the Dsquared2 boys, Dean and Dan Caten, who took the audience back to the 1940s, opening the show with a model posing as a Parisian jazz club singer. 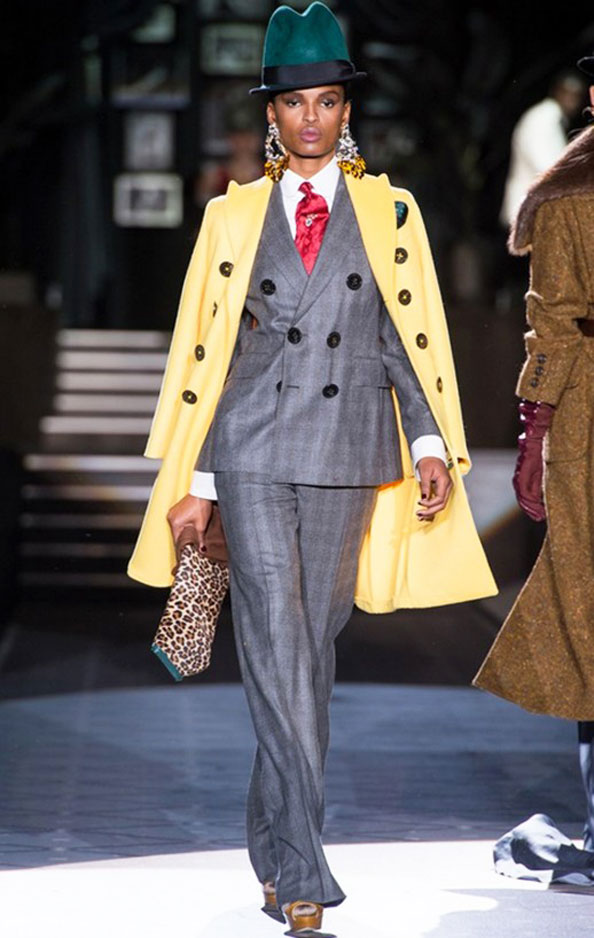 Their all-star cast included Cara Delevingne, Lindsey Wixson and Daphne Groeneveld who rocked the runway in Dsquared2 signature tailoring, with attitudes to reflect the masculine designs. Guests were spotted dancing along to the superb soundtrack which included Jennifer Hudson’s version of Feeling Good and Rihanna and Chris Brown’s Ain’t Nobody’s Business.

Meanwhile at Prada, a different era was embraced as the 1950s American housewife quickly became the inspiration behind Miuccia’s collection. 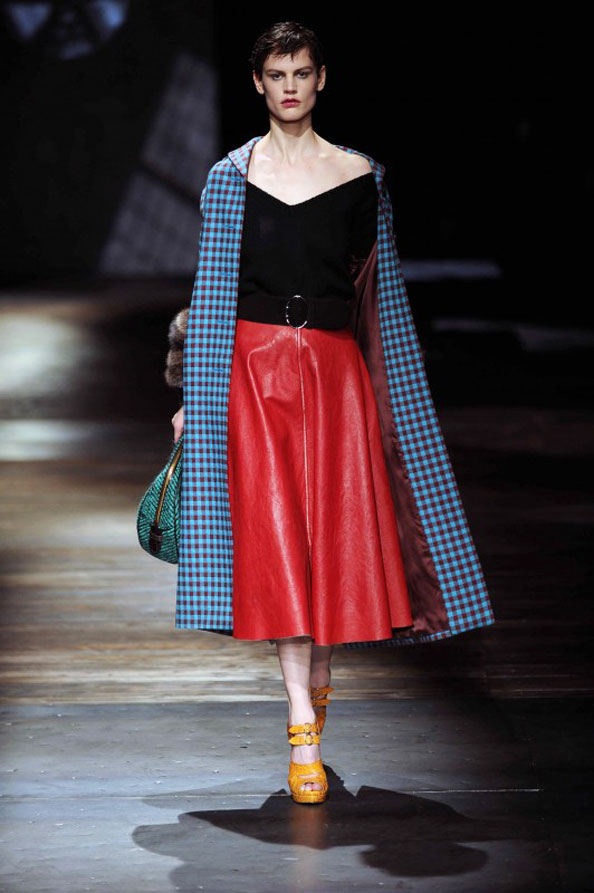 Check prints, asymmetrical sleeves and wide-waist belts were complemented by oversized bowling bags in tweed and crocodile. On the beauty front, crimson mouths were teamed with a wet look hair – a contrast that helped create an overall polished appearance.

Drama broke out at the Just Cavalli show when the safari theme, and the use of animal skins and fur, prompted an animal rights activist to storm the stage, brandishing a sign saying: “Your Fashion, Their Death.” Once ushered off stage, the show continued with bold colours and tiger print remaining traditionally Roberto Cavalli. Following in the footsteps of her supermodel mother, Georgia May Jagger closed the show holding her own against the most seasoned models. 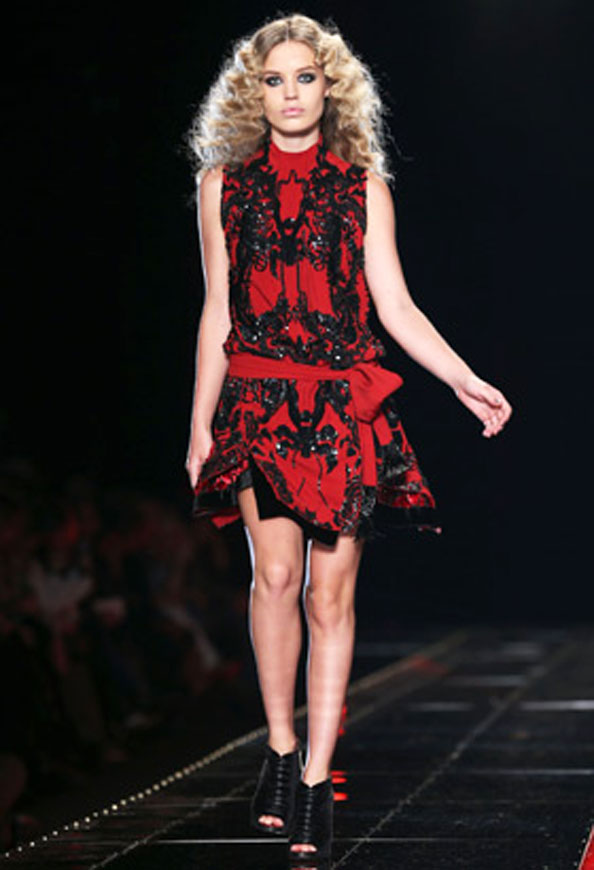