Jewellery designer Nadine Kanso never expected to have her own brand. A desire to express the true Arabic identity celebrating the culture and heritage of the region culminated in the incomparable Bil Arabi.

“It’s a beautiful world and something I consider myself lucky to do,” Nadine Kanso says proudly of her creative role. “There is no struggle when I wake up in the morning to go to work because I do what I love.” Interestingly, like many of those who are creatives and entrepreneurs, it’s a career path Kanso never saw herself taking. Having founded Bil Arabi – which in English means ‘In Arabic’ – brand in 2006, her brainchild was the result of an evolving passion for jewellery and art, as well as the desire to be able to outwardly express her passion for her own Arabic culture.

The designer now creates a range of pieces – many of which are bespoke – using Arabic calligraphy in different designs to fit rings, necklaces, earrings and more. No collection she creates is ever the same, as Kanso is always “trying to push the boundaries”, yet the one consistency in the brand is about celebrating the Arab culture. “It represents my Arab identity – my pride, my culture, my heritage, my language,” she tells Emirates Woman. 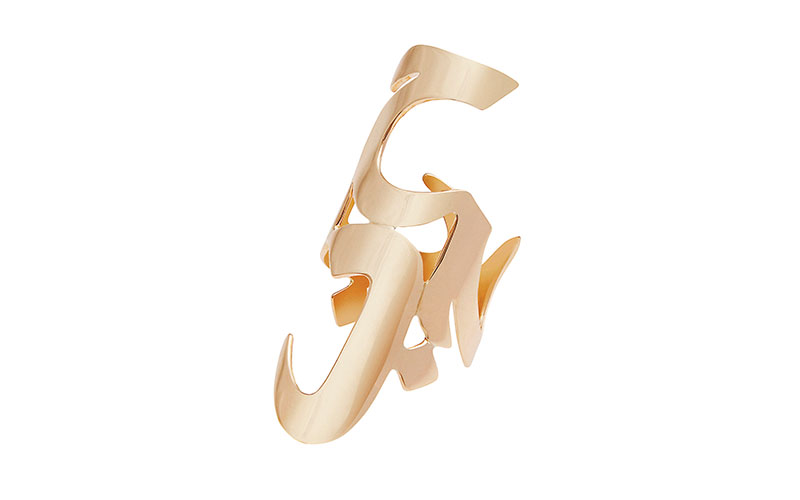 With her career background in design-related fields and stints of living in Canada and Czech Republic, it was when Kanso moved to Dubai with her family that she found herself dedicating all her time to photography after dabbling in photo-journalism. Eventually this love for photography extended to jewellery design after an exhibition she held in Dubai entitled ‘Meen Ana’ – or in English ‘Who I Am’. “It was about the Arab identity, the Arab culture and who we are as Arabs,” she explains. “Bil Arabi was born from there.” It was also a response to the events of 9/11, which Kanso notes created a “big shift” in how Arabs were perceived. “I wanted to change that perception and by wearing our own letters and initials in Arabic with pride and showing the identity of who we are in a good way,” she says.

The “natural artistic progression” for the making of Bil Arabi started with one ring Kanso began wearing. “People then started asking me about doing more,” she says and the brand was born. While Kanso had everything covered for the design and creative process of the brand, the business side of things was a bit more challenging. After receiving some help from her husband initially, Kanso hired an accountant to help her with the numbers of the business. “I had to start using Excel and figuring out numbers, which I had no clue about – and I still have no clue,” she jokes. “I had to hire an accountant that helped me throughout.” While she does admit it would have been useful to know more about structure when it came to business, it’s not something she dwells on. “I have no regrets with that because I believe in life we have to go through our own journey and to learn day-by-day especially when it’s something new,” she says. “There’s a big pleasure when you do so.”

It’s now been over 14 years since Bil Arabi’s inception and Kanso has continually been able to develop and reinvent the brand with each collection she produces and this is through her sheer determination to produce creative and one-of-a-kind pieces. When she first began designing jewellery, she was the first one to work with Arabic letters and it garnered major attention. “People really related to it,” she recalls. “We’ve managed to adapt and develop with how I design things and with the words I use and the colours I use. There was always something different and something new to offer. I would say it was a classic, yet chic, yet contemporary approach.”

Constantly trying to push the boundaries, Kanso’s approach to business is simple – it’s all about the art of design. For her, the design process includes the calligraphy of Arabic letters, which she then takes and cuts, enlarging them or reworking their typography to create a form which will work with the design she has in mind. It’s not always about creating a collection that must sell, it’s about the creative process to reach an end result that she envisions working for the Bil Arabi brand. “I actually have a collection that is totally unwearable, but the pieces are more forms of art,” she admits. “This is what I try to do. I don’t always make something that’s purely sellable – I push myself to make something different.” 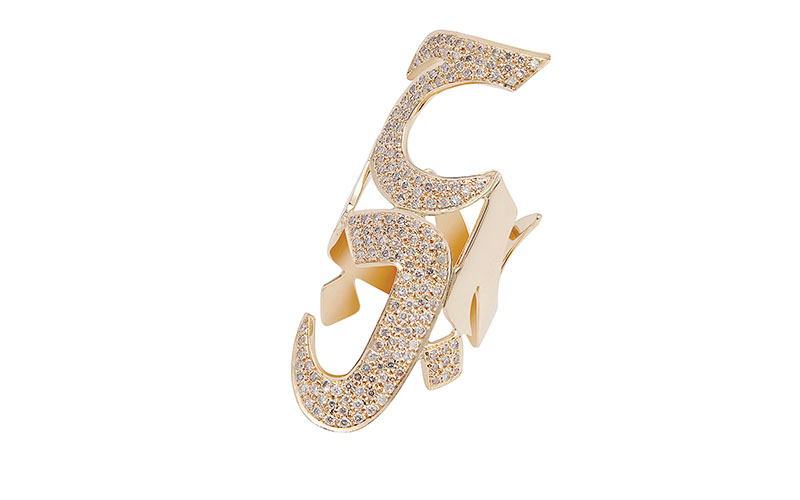 It’s certainly working as not only has Bil Arabi become increasingly popular with consumers, the brand’s pieces are also a huge hit with celebrities including the likes of Kylie Minogue, Zahar Hadid, Kendall Jenner and more. She’s also collaborated with some incredible high-end brands including Louis Vuitton, Gucci and Bernardaud. Most recently she collaborated with Gaga Milano to produce a watch.

However, this ever-growing popularity has resulted in the copying of some of her designs, but instead of a hindrance it simply inspires the Lebanese designer to be more creative. “We have had a lot of people copying our work so this is where creativity comes into play,” she says. “This is the most annoying part because people say Arabic is not mine – of course I don’t own the Arabic language and calligraphy, but when other designs come too close to what we do, this is where it becomes challenging. It pushes me towards creating different things – to go three steps ahead and elevate the brand more and more.”