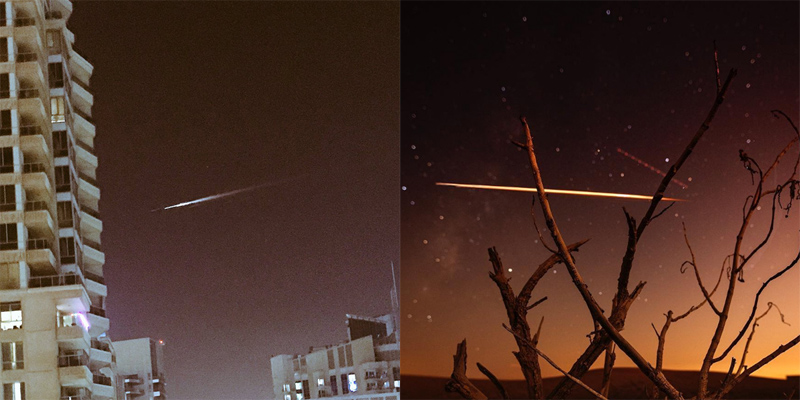 Whatever it was, it was extremely striking.

If you were looking up at the sky around 7.30 on Monday night and spotted some sort of shooting star, you’re not alone and you’re not losing your mind. While it was first widely assumed to be a meteor, the Dubai Astronomy Group have since confirmed the light show came courtesy of a Russian space craft.

It was a cargo ship with the not-particularly-romantic name of Progress Module M07 SL-4 R/B, the group said, noting that it was seen all the way from Saudi Arabia to Oman. Since it was visible for 80 seconds, Gulf residents had plenty of time to grab their phones and get some footage. Any leftover debris will have made its way into the Indian Ocean, they said.

READ:
Here’s why Gucci will stop using fur from 2018
15 things only people who grew up in Dubai will know

Our favourite shot, you won’t be surprised to hear, came from HH Sheikh Hamdan bin Mohammed bin Rashid Al Maktoum. Sheikh Hamdan must have been out in the desert on Monday evening:

For a more urban view of the (very pretty) space junk, there’s this shot from Elias Nemeh on Twitter:

The Dubai Media Office shared this excellent video of the phenomenon:

Mohammed bin Rashid Space Center confirmed that a meteorite has passed through the skies of Dubai pic.twitter.com/acPvBRTIp7

This clip, filmed in Abu Dhabi, gives a sense of how long the light show went on for.

Here’s another short video of the space craft peeking through between Dubai’s towers.

Just another Monday night in the UAE, really.