In pictures: Inside the Sultan of Brunei’s daughter’s 10-day royal wedding 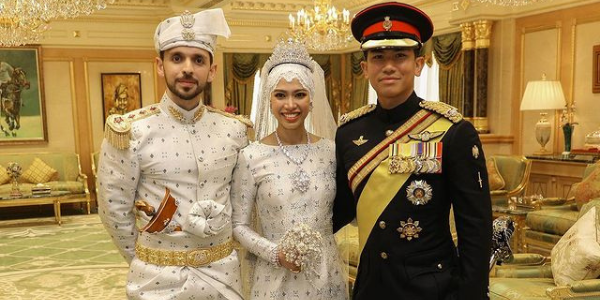 It’s been a joyous week for the royal family of Brunei as they celebrated the marriage of the Sultan’s daughter, Princess Fadzillah Lubabul to Abdullah Nabil Mahmoud Al-Hashimi.

Hassanal Bolkiah ibni Omar Ali Saifuddien III, the 29th Sultan of Brunei, is one of the world’s richest men and he spared no expense for his sixth daughter and ninth child Princess Fadzillah, hosting a lavish 10-day ceremony for her and her new husband.

Giving an insight into the elaborate ceremony, Princess Fadzillah’s younger brother Prince Mateen, shared a series of photos of the wedding with his 2.1 million followers on Instagram.

“Congratulations to the newlyweds,” he said in the caption in one of his posts. “I’m so happy for the both of you. Big love to my beautiful sister.”

Unlike her younger brother, Princess Fadzillah generally stays out of the spotlight, but is known for her role as the captain of the Brunei Netball Team and is also a graduate of London-based Kingston University with a degree in international studies.

Little is also known about her new husband, but Abdullah Nabil Mahmoud Al-Hashimi has been described by the local Brunei press, according to Tatler, as a “handsome foreigner”.

The wedding celebrations began over 10 days ago on January 16, 2022, according to reports, with the couple receiving a blessing from the Sultan of Brunei.

On Thursday, January 20, 2022, the religious ceremony took place at the Omar Ali Saifuddien Mosque, located in the capital of Brunei, Bandar Seri Begawan. This was closed by a 17-gun salute.

The royal bride stunned in a white jewelled ensemble, which matched with her now-husband. Fitting for a royal bride, Princess Fadzillah was also dripping in jewels, wearing a diamond tiara, as well as a pearl and diamond necklace, which she borrowed from her stepmother, the Queen of Brunei.