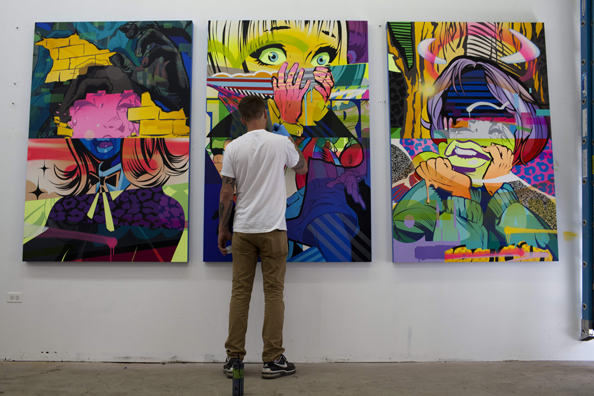 You’re not going to find the kind of graffiti that made POSE and REVOK household names in Dubai. While the city is fast becoming a go-to destination for both artists and patrons, thanks to it’s burgeoning gallery scene and political stability, it has a strict policy and swift cleanup crew when it comes to unsanctioned public artwork. But that’s not a problem for POSE and REVOK as both artists have managed to straddle the great divide between train carriages and white cubes.

This weekend sees the duo present their debut Middle East show. From Thursday April 24 to Saturday April 26, The Mine in Al Quoz will be bringing art fans an exclusive opportunity to see original artwork by the two US-based legends. But as everyone knows Dubai doesn’t do ordinary, so Thursday evening’s exhibition opening will be an ‘all access experience’ – a multisensory fusion of art, music, fashion and fine dining to add a new unexpected dimension to your art viewing experience.

Chicago-based Jordan Nickel, better known as POSE got an early start in the world of graffiti at age 12. In a relatively rare move, he took his street experience into a formal art institution and graduated from the Kansas City Art Institute in 2004. His work is largely influenced by classic sign painting and early cartoon styles. The result of which is generally a mash-up of bold, clean lines, energetic solid colour and intriguing collages of fractured images. 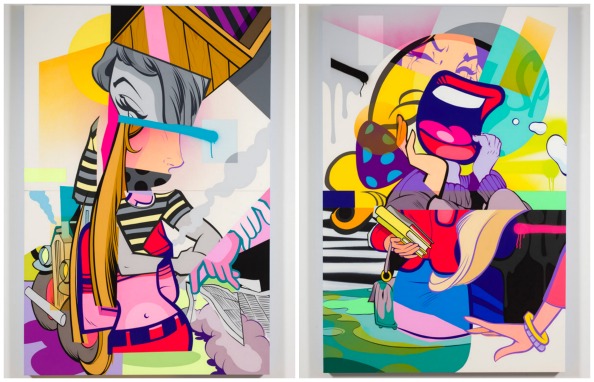 Los Angeles based REVOK is a born and bred Californian, a fact which comes through clearly in his work, which oozes a sense of nostalgic warmth reminiscent of  Californian sunshine. Heavily influenced by his fathers collection of 1960s and 1970s album covers, comic books and skateboarding culture, he was a rebellious child who had a fascination with the urban landscape and would sneak out at night to explore and make is mark on the world. and that he did through his energetic pieces.

Both artists have been welcomed into the Fine Art Gallery world with exhibits at the Museum of Contemporary Art Los Angeles and Detroit, Miami’s Art Basel as well as shows in New York, Los Angeles, Detroit and Berlin.

This exhibition is presented by Detroit-based Library Street Collective, which specialises in cutting edge modern and contemporary fine art with a primary focus on artists who have developed their skills and visual art in public spaces.

Please note that the Thursday event from 8pm – midnight is by invitation only. For guest list registration or a catalogue of available work, please contact info@lscgallery.com