Stella McCartney Meat Free Monday Campaign To Save The World 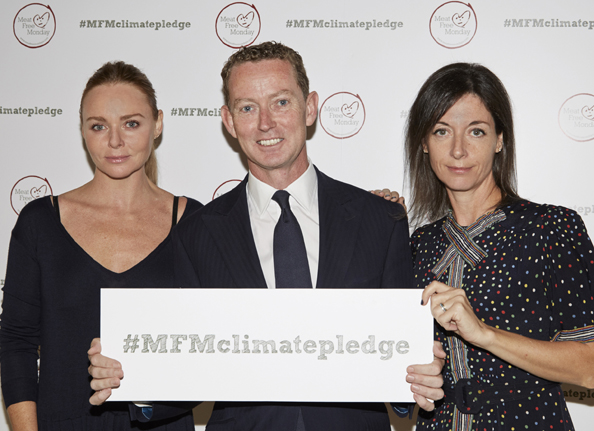 Stella McCartney together with her father Paul McCartney and Greg Barker, British MP and Climate Adviser to David Cameron, have joined forces to help tackle climate change with the Meat Free Monday Climate Pledge campaign ahead of the UN Climate Summit on September 23.

The Meat Free Monday organistation was founded by Paul, Stella and Mary McCartney in 2009 after the family learned that a United Nations report, produced that year, stated the livestock industry was responsible for more Green House Gas (GHG) emissions than the entire global transport sector. The organisation cites a study that says that not eating meat just one night a week is comparable to not driving your car for a whole month in carbon footprint savings.

Sir Paul McCartney said of the campaign: “Going meat free one day a week is a simple way to contribute to a more sustainable future. Please pledge your support at pledge.meatfreemondays.com and encourage world leaders to back this in order to help fight climate change.”

A 2013 global report by the Food and Agriculture Organisation of the United Nations recognised livestock as a major contributor to climate change. A staggering 7.1 gigatonnes of Carbon Dioxide emissions are produced by livestock farming per year, which represents 14.5 per cent of the annual human-induced GHG emissions. Beef and cattle milk account for the majority of the emissions contributing 41 and 20 per cent of the emissions respectively, with poultry and eggs contributing 8 per cent. It is predominantly the feed production and processing which is the cause of these high numbers.

In addition to the emissions produced by livestock farming, it is also contributing to global deforestation. According to a 2013 study conducted by Brazil’s National Institute for Space Research, an area the size of a FIFA specific football pitch is cleared in the Amazon rainforest every hour to make way for grazing cattle.

Frighteningly scientists believe we are near a tipping point and that soon climate change might be irreversible. The United Nations’ Intergovernmental Panel on Climate Change, headed by leading scientists using the latest available data, believe that the global target of limiting climate change to 2 degrees Celsius by 2050 is slipping out of reach, with global emissions up 2.2 per cent in the last decade, up nearly twice as much as in the three decades before it.

UN Secretary-General Ban Ki-moon has invited world leaders, from government, finance, business, and civil society to the September summit and charged them with the responsibility to “bring bold announcements and actions to the Summit that will reduce emissions, strengthen climate resilience, and mobilise political will for a meaningful legal agreement in 2015.”

Unfortunately, this is not a problem we can solely leave at the doorstep of lawmakers, which is why Meat Free Monday is a simple and effective way to enact change, Barker explains: “Giving up meat one day a week is more than just a symbolic act and, if enough of us do it, will send a very powerful and loud message to world leaders. Meat production is an increasingly large contributor to dangerous climate change so coming together like this may have a small but very real impact.”

To participate in the campaign visit pledge.meatfreemondays.com and use the hashtag #MFMclimatepledge to spread the word.