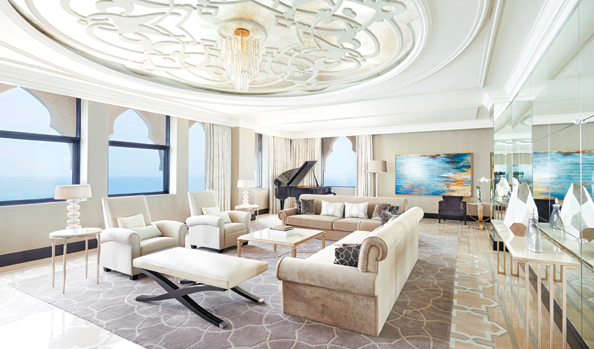 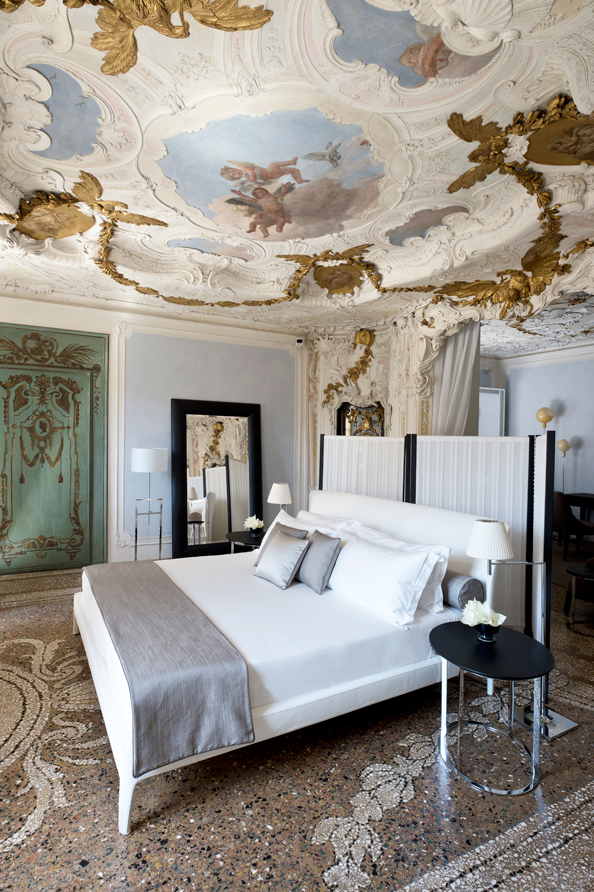 It’s not too late to make 2015 a year of luxury, with our rundown of the world’s swankiest hotel rooms and the interior geniuses behind them…

The Hotel: Couple of the moment George Clooney and Amal Alamuddin got married in Venice surrounded by celebrity pals. But it wasn’t the A-list guest that stole the show; it was their venue of choice, The Aman Canal Grande. Up until its’ opening in 2013, the hotel was a private palazzo. In some ways it still is, with owners the Papadopoli family living on the top floor. It took nine years to make the opulent guest areas and suites visitor-ready – a task attributed to Jean Michel Gathy of Denniston Architects. He has done a stellar job of blending the modern signature style of the Aman brand with historic Venetian opulence. But with original 19th century Murano chandeliers and marble staircases to work with, it must have been an interior designer’s dream.

The Suite: The Alcova Tiepol is rumoured to be the bridal suite that George and Amal retreated to after their nuptials. The bed is framed with a painstakingly intricate cream stucco, while Venetian style friezes decorate almost every wall. Gathy has used surprisingly simple furniture for such a grand canvas, but that only makes the end result yet more magnificent. Don’t just take our word for it (or even the Clooney’s); this spot won first place at The European Hotel Design Awards 2014. 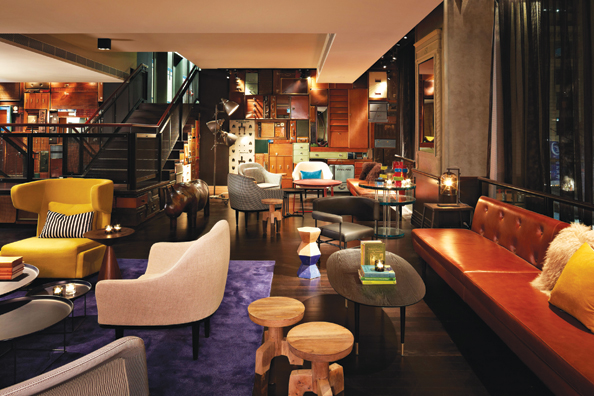 The Hotel: Some of the most interesting properties in the world are conversions. Take QT Sydney – a listed department store and state theatre trasnformed into a charmingly eccentric hotel. The public spaces nod to the building’s past with Nic Graham of boutique agency g+a taking lead on design. The result is brimming with rich crimsons and royal blues reminiscent of an old movie theatre. Contemporary touches are everywhere, from the LED art wall to the low hanging brass lamps.

The Suite: The chic guest rooms are the masterpiece of Shelley Indyk, who has created 20 different styles amongst the 200 rooms. Our favourite is the QT corner suite, which offers a Japanese bathtub, a retro vibe, and some seriously cool soft furnishings.

THE PENTHOUSE AT THE FOUR SEASONS GEORGE V, PARIS, FRANCE The Hotel: There are a handful of hotels in the world whose reputation precedes them – Four Seasons George V, on Paris’ prestigious Champs Elysee, is one of them. Built in the twenties by American architect Joel Hillman, it cost almost Dhs114 million to complete. Since then, it’s undergone a few costly facelifts, most notably in 1999, when a two-year Dhs460 million renovation took place.

The Suite: The interior design is as imperial as it comes, dripping with 18th century relics that exude Parisian magic. The Penthouse Suite is adorned with original historic artworks, and many of the fittings are antique. Considering the price per square foot in Paris, the size of this suite is impressive, and it even has a terrace overlooking the Eiffel Tower. The Hotel: Those who think Bangkok is nothing but a bustle of tourists, traffic and city noise have never heard of The Siam Hotel. Occupying three acres on the bank of the River of Kings, this is one of those places that hotel star ratings can’t do justice. Its boutique charm includes a private antiques collection and historic Asian interiors lovingly crafted by designer and architect Bill Bensley. The brain behind this unique retreat is creative director Krissada Sukosol Clapp – a Thai-American pop star and actor turned hotelier. With a private pier, spa, and one of the quietest rooftops in the city, it’s like being transported back to Thailand-before-the-tourists.

The Suite: OK so we’re cheating a little bit. This isn’t exactly a suite, but a cottage entirely separate from the main hotel. But trust us, we bend the rules for good reason. Once situated in the historic capital, Ayutthaya, and owned by antique collector, Connie Mangskau, “Connie’s Cottage” was transported by boat downstream to Bangkok where it was reconstructed. Features include a lavish four-poster-bed, a huge private pool, and secluded gardens. 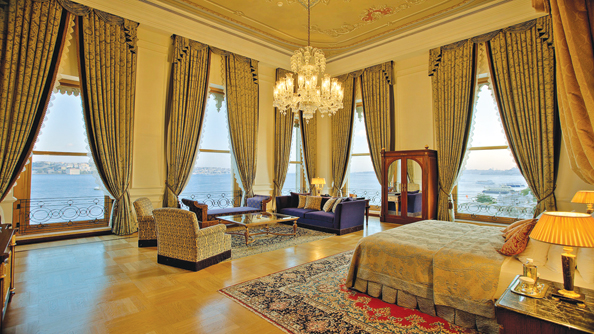 The Hotel: A true gem of the Ottoman Empire, Ciragan Palace was built between 1863 and 1867 – a time when it wasn’t de rigeur for sultans to reside in their ancestor’s palace, instead constructing a new one every time the throne changed. Sultan Abdülâziz commissioned the project to architect Nigoğayos Balyan. The interior of this magnificent stronghold wasn’t finished until a whopping ten years after construction started – but the result was well worth the wait. However, a raging fire destroyed everything but the outer walls in 1910, leaving it to serve as a football stadium for  a number of years, until its restoration in the early nineties. Now owned by the Kempinski brand, it looks as fascinating as it is. The interiors are antiques, designer pieces and replicas, doing credit to the Sultan who took such pride in its construction.

The Suite: The aptly named Sultan Suite is one of the biggest in Europe, and with 180 views over the Bosphorus, it’s certainly the most outstanding room in the city. The private steam room and rain shower are ideal for a relaxing escape, but with a dining room fit for 12 people, it’s also perfect for those who love to entertain.

The Hotel: There are traditional design elements in every Waldorf Astoria, not least Peacock Alley, which takes its name from the original Waldorf in New York. This corridor connected the Palm Room and the Empire Room restaurants – it was the place for high society to see and be seen. The Ras Al Khamaih property has done a wonderful job of taking design rituals like this and giving them an Arabic twist, thanks to The Gallery HBA London, who took the lead on design. Peacock Alley is grand yet private, with seating circling a marble fountain. Throughout the hotel this thoughtful blend of sophistication, culture and history is evident, especially the exquisite signature timepiece which indicates five daily prayer times.

The Suite: Every suite in the hotel was designed to accommodate guests who value privacy. With a client list including Sheikhs, celebrities and prominent businessmen, it’s easy to see why. The design team drew inspiration from luxury fashion houses for the King Imperial Suite to deliver the glamour that Middle Eastern visitors love. A marble staircase, a headboard embellished with mother-of-pearl, a huge terrace with views over the Arabian Gulf, and a baby grand piano, are just a few of the touches that bring this suite to life.