Six of the world’s best art hotels, from Dubai to Shanghai 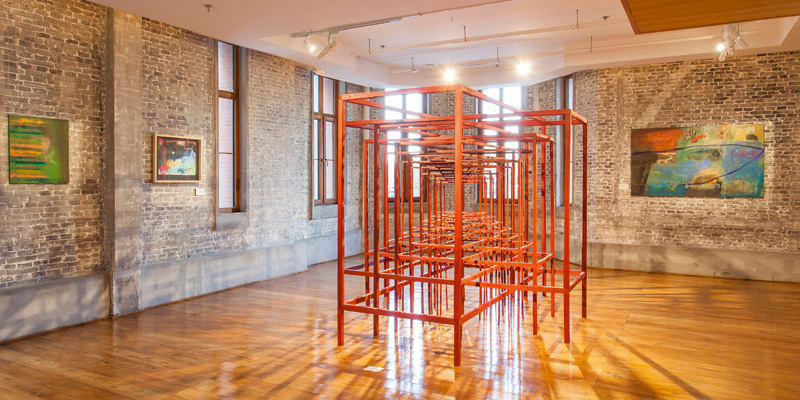 They say that hospitality is an art…

But what happens when you combine the finest of masterpieces with some of the world’s most exclusive hotels?

Join us as we journey the art world without leaving the comfort of our luxe pied-à-terre. These are our picks for the world’s top art hotels. 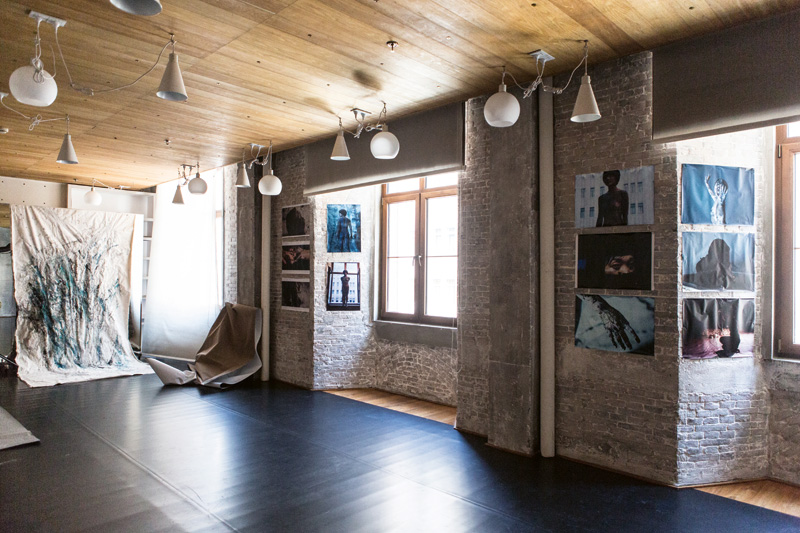 An art hotel in its purest form, this stately building opened in 1908 as The Palace and is still one of Shanghai’s best-known landmarks. It became the Swatch Art Peace Hotel in 2011, fully restored and renovated, with soaring ceilings and light-filled galleries, as well as spectacular views over the famed Bund and across the river to the bright lights of the futuristic Pudong district.

However, this hotel boasts an extra level of exclusivity – just a few months ago it closed its commercial hotel operations to focus solely on its prestigious artist-in-residence programme.

So if you’d like a room at this incredible pile, you’ll have to apply to the Selection Committee for a chance to live and work there – you’ll be in the company of gifted artists from the world over, contributing to the artistic and cultural development of your fellow artisans and Shanghai’s creative scene. If you’d prefer to remain a free agent you can still visit the hotel’s exhibitions and even dine in its renowned Shook! restaurant. 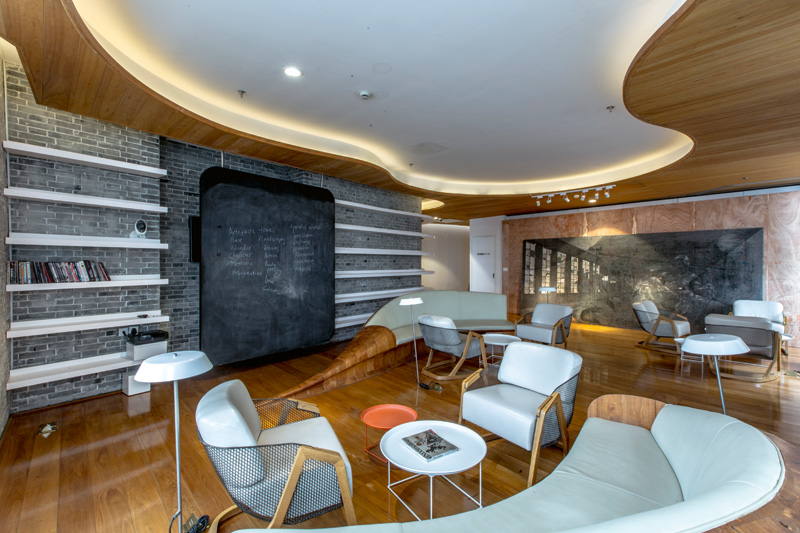 But for now, if you need a bed, you’ll have to settle for the original Sassoon House – now known as the Fairmont Peace Hotel – just next door. The grande dame of Asian hotels, it’s an Art Deco masterpiece and was one of the Eastern Hemisphere’s first skyscrapers, with Marlene Dietrich, Charlie Chaplin and Noel Coward all paying a visit in the property’s heyday.

It also houses an enviable collection of its own – a gallery of priceless Lalique glass pieces. All things considered, that’s not such a step down. swatch-art-peace-hotel.com 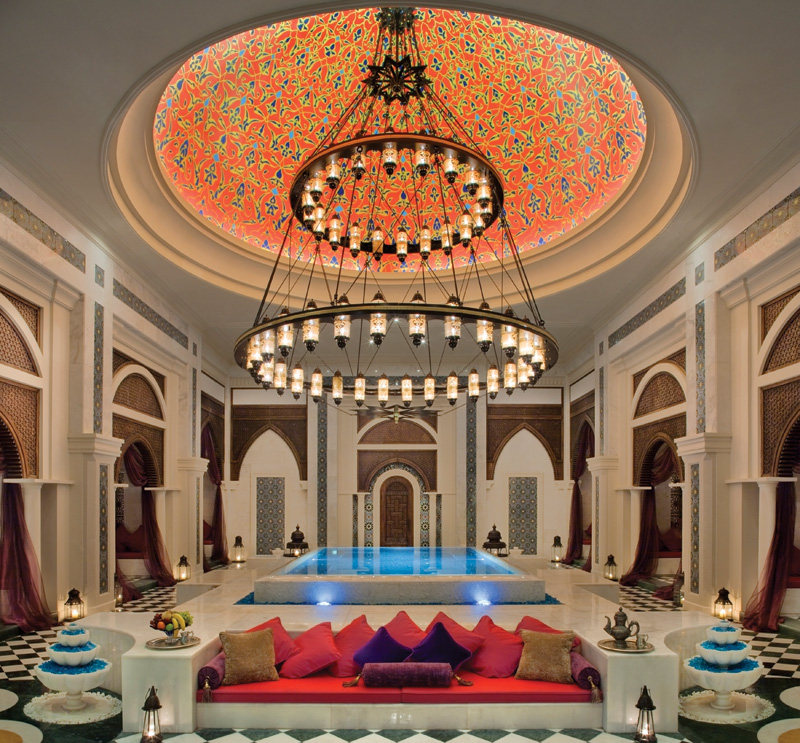 It’s the artisan’s eternal dilemma – what use is form without function? But this is where the breath-taking Jumeirah Zabeel Saray excels – it’s a living testament to the very best of Islamic art and Ottoman style, all within the setting of a functioning hotel.

With every fixture lovingly hand-crafted by artisans using classic techniques, down to the red Turkish velvet upholstering of the lobby’s sofas, it’s impossible to find a corner of Zabeel Saray that hasn’t been lovingly beautified. Some 30,000 square metres of Turkish marble were used in the property’s design, painstakingly hand-worked by traditional craftsmen to evoke the classic motifs of the Ottoman era – crescent moons, Ottoman stars and pointed arches are subtly woven into the hotel’s décor, while luxe imported fabrics and drapery evoke the patterns of the palaces of old. 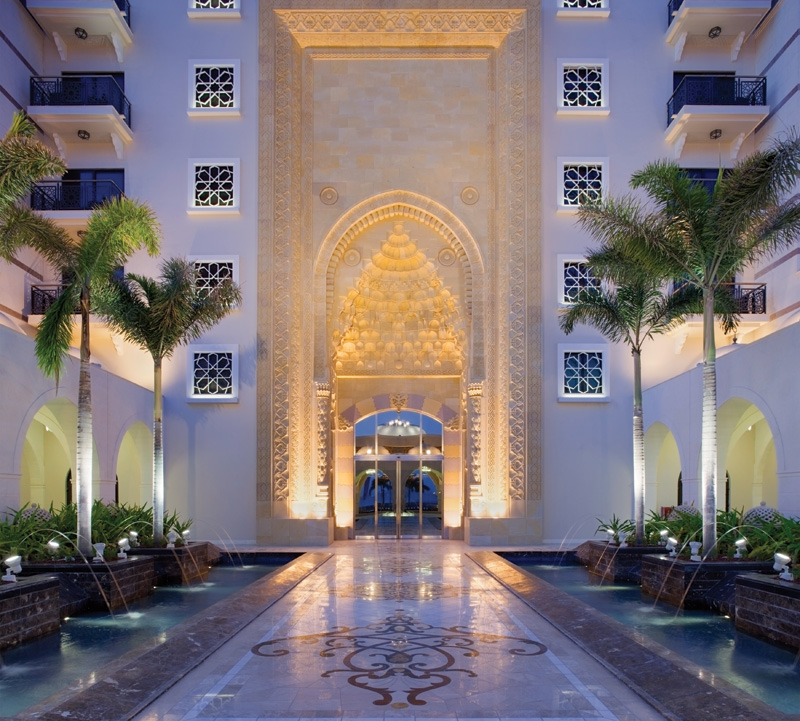 The tile and wood-and-stone construction of the hotel itself assures an authentic feel, while the  display of paintings by renowned Turkish artist Ismail Acar and sculpturally stunning chandeliers complete the sensation of literally stepping into a masterpiece.

It’s truly design fit for a king – or queen – that can transport you to an age of sheer extravagance. jumeirah.com 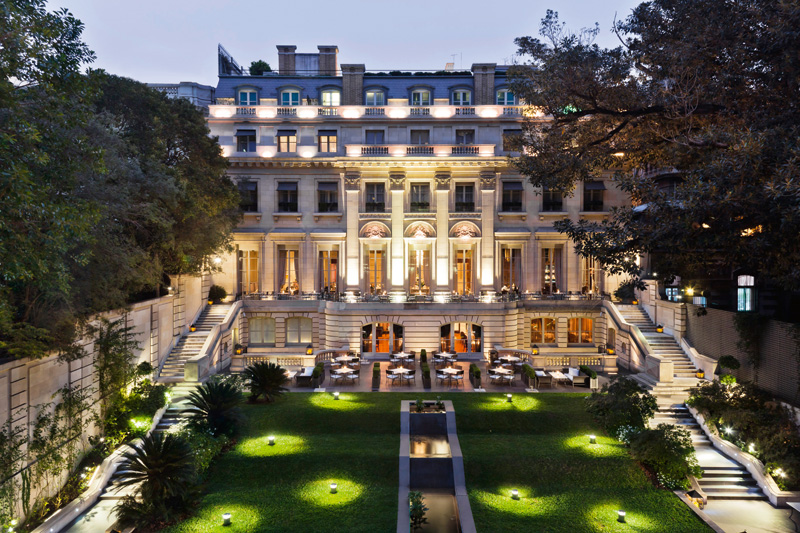 It was an ingenious solution with inspired execution – how to link a historic Argentine palace with a modern, functional hotel building to create Buenos Aires’s most exclusive hotel address? With an underground passage, serving as both access and art gallery.

The Paseo de las Artes is an almost sacred space, hushed and with muted lighting, that leads from the Park Hyatt’s luxe, contemporary lobby to the Palacio Duhau, a neoclassical masterpiece in itself housing two restaurants, a bar, tea room and 23 of the hotel’s 165 rooms and suites. 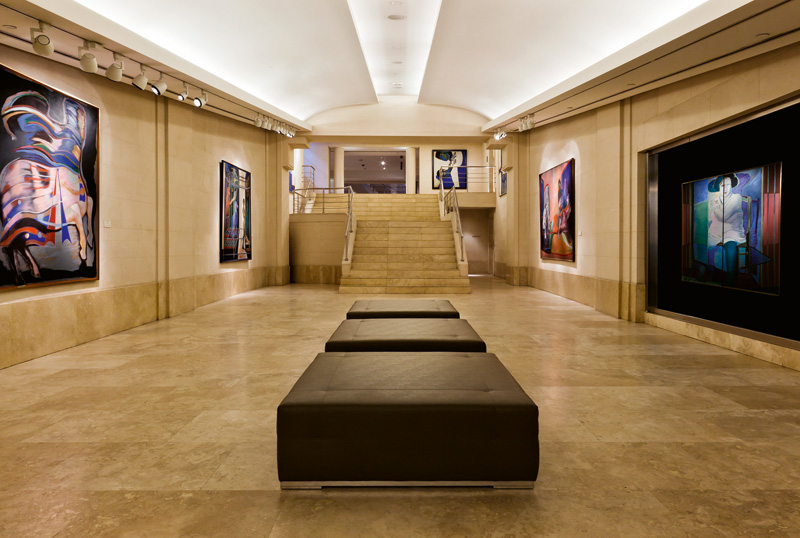 The Paseo hosts regularly-changing exhibitions of both Argentine and international Latin American art, as well as some permanent exhibits – a bronze by Jean Louis Toutain, sculpture by Spanish artist Guerrero Medina, Menina by Manolo Valdés and La Ronda, a celebration of modern theatre by Guillermo Roux. All set in the pure luxury and understated style that only a Park Hyatt hotel can seem to muster – not to mention the romance and intrigue of its glorious Buenos Aires locale.

Get to know the refined Recoleta neighbourhood and the irresistible cool of its residents – only matched by the stunning art on display right underneath the hotel’s tranquil lawn. Magnífico! hyatt.com 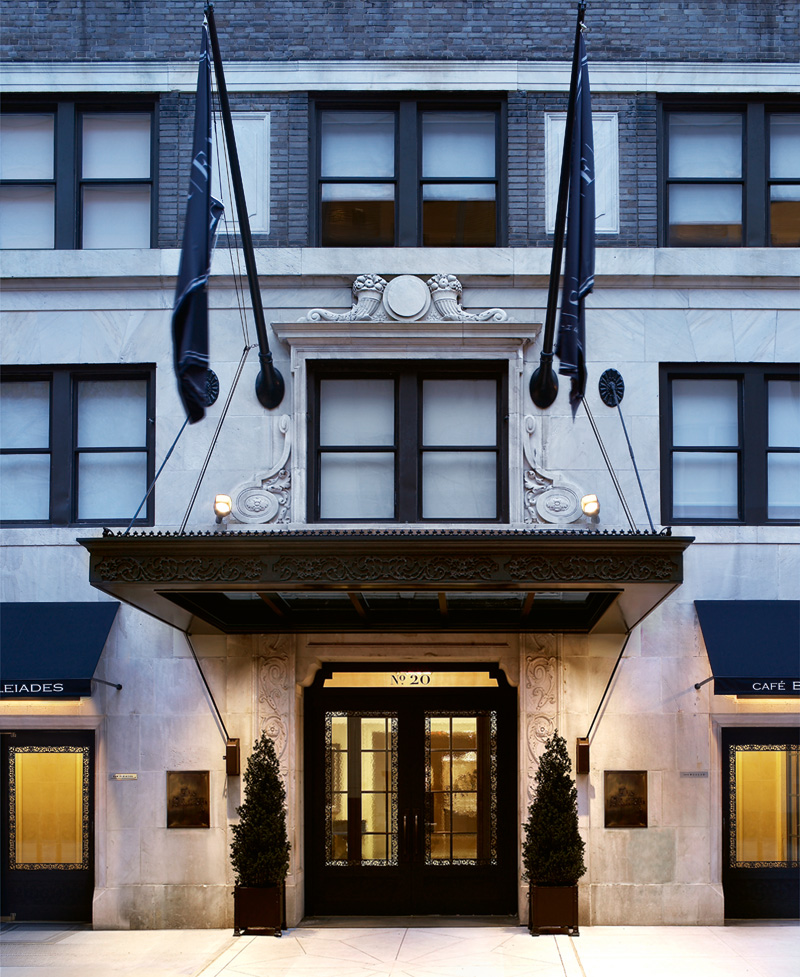 This Upper East Side bolthole is renowned for its discreet, private feel – but what brings its exclusivity up a notch is the fine art collection displayed on its 1920s walls.

Positively oozing with stories of NYC’s rich and famous, John F. Kennedy, Bette Davis and Claudette Colbert all took advantage of The Surrey’s tact and privacy, but it’s the hotel’s masterpieces that are the talk of the town today. 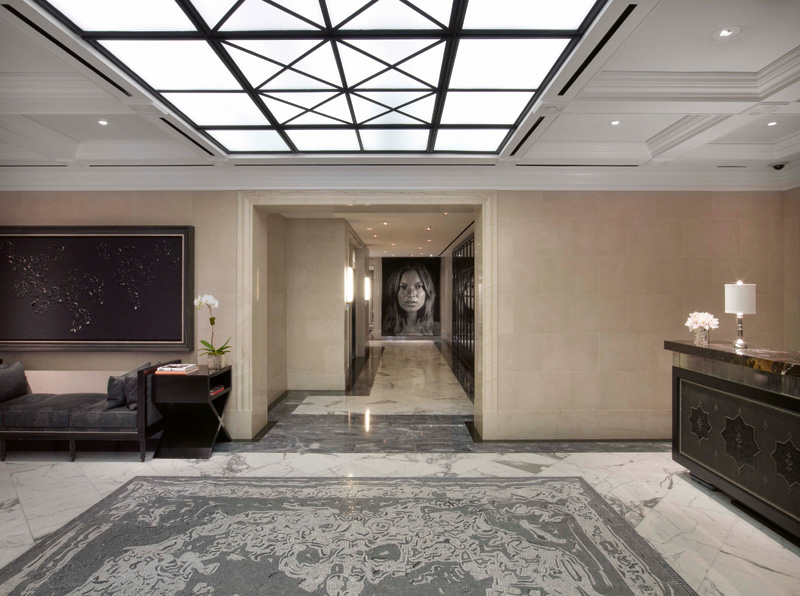 Photographs by American conceptual artist Jenny Holzer add character to the property’s public areas while the tapestry of Kate Moss by portrait artist Chuck Close steps forward as a real eye-catcher– who wouldn’t be captivated by the alluring stare of one of fashion’s most enduring icons?

You may spot another in real life strolling through the lobby. thesurrey.com 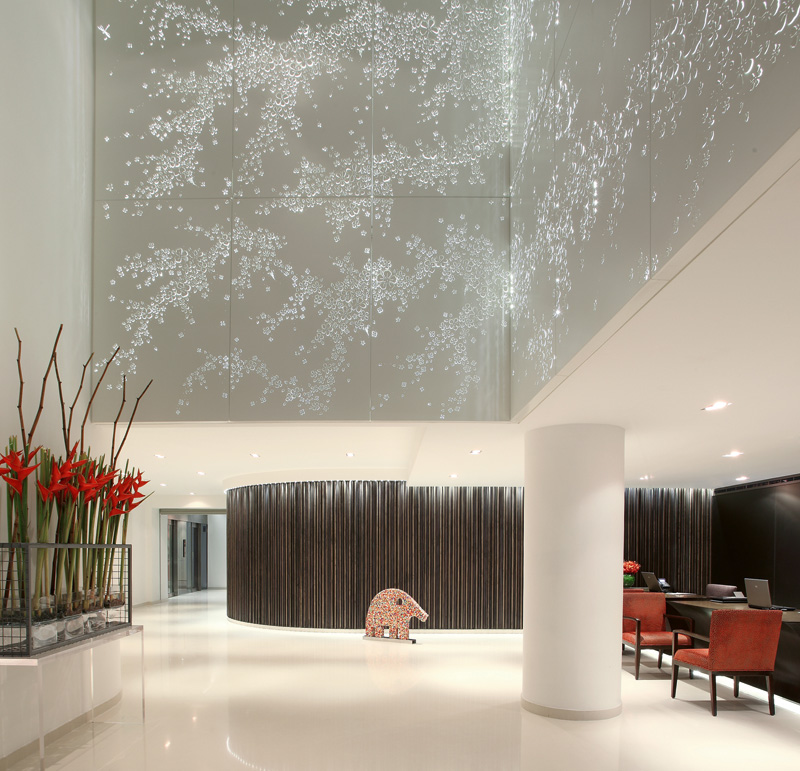 With its light, white and bright spaces, Le Gray Beirut is anything but dull. Reminiscent of a modern art gallery thanks to its clean architecture, ethereal lighting and soaring windows, the hotel serves as the perfect backdrop for an enviable collection of sculptures and paintings.

With upwards of 500 works of art in varying shapes and forms dotted throughout the property, Le Gray’s collection comes from such far-flung destinations as Cuba and Ethiopia as well as exhibiting pieces from Beirut-based artists as part of the mix. Works with real ‘wow’ factor include the extremely Instagrammable Baby Elephant sculpture by Lebanese artist Nadim Karam and Féerie Florale by Valerie Boy, a huge backlit metal wall that twinkles with fret-cut flowers. Its downtown Beirut location puts you in the very heart of Martyrs’ Square and all the city’s museums, restaurants and upscale shopping.

But with so much eye candy on the hotel’s walls, how much time do you really need to spend outside it anyway? campbellgrayhotels.com/le-gray-beirut 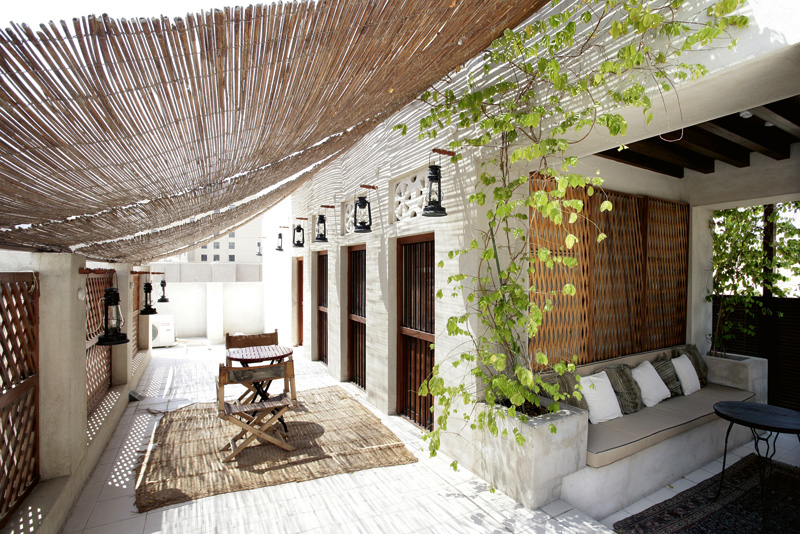 Many art-themed hotels fit their collections in and around their rooms, but XVA Art Hotel takes the completely opposing approach – it’s a gallery, first and foremost, that just happens to house a hotel too.

Situated in Dubai’s atmospheric Al Bastakiya quarter, replete with traditional wind towers and century-old whitewashed coral stone walls, XVA is positively ancient in Dubai terms – not only does the building have more than 100 years of history, but the hotel itself has been up and running since 2003. 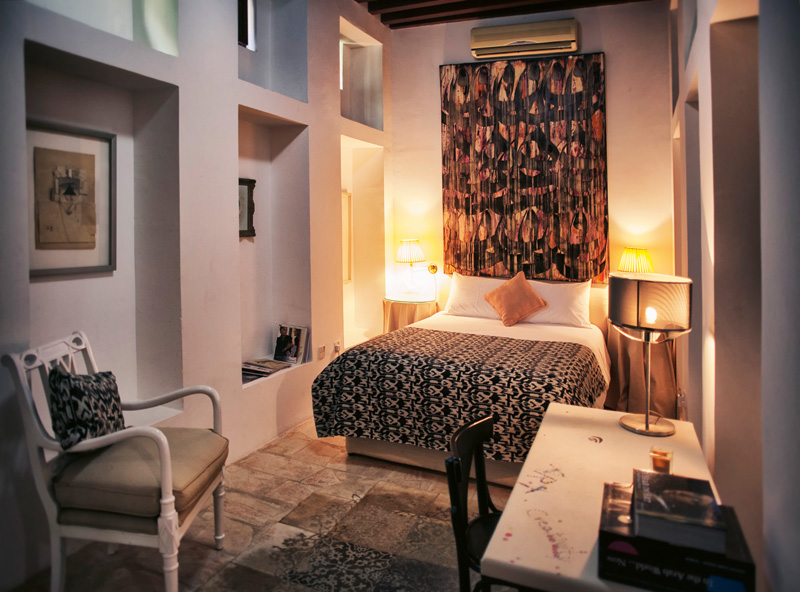 The 14 guest rooms are each decorated differently in styles that reflect Emirati culture and history. Constructed in the traditional local style, around a central courtyard, XVA hosts exhibitions, talks and workshops – as well as guests – in its café and hotel rooms.

The latest event hosted at XVA is a series of eight talks by renowned art expert Rose Balston about the power of art in the seventeenth century. With the talks running until 25 April there’s still time to book a room and nourish and inspire your artistic spirit. xvahotel.com