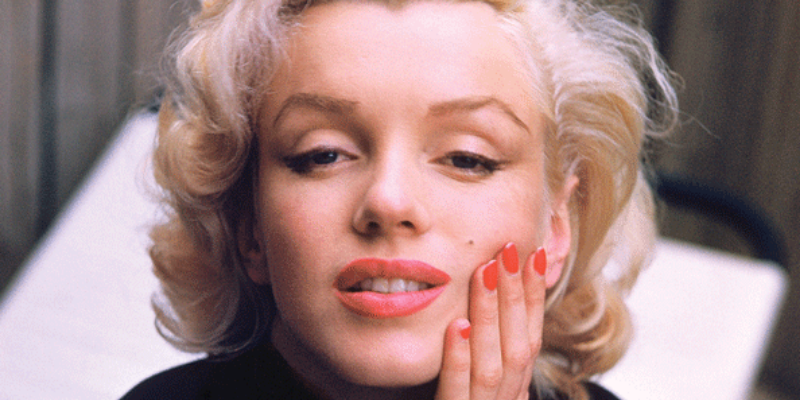 August 5 marks 53 years since the death of cinema’s most glamorous and iconic actress.  Michelle Morgan, author of Marilyn Monroe: Private And Undisclosed, reveals the truth behind the star’s tumultuous life…

For many, Marilyn Monroe, who if still alive today would be 90, will always be the girl on the sidewalk grating; her skirt blowing up around her waist. For others she is the woman breathily singing her way through Happy Birthday for President John F Kennedy. In reality, however, she was neither. In fact it could be said that Marilyn Monroe wasn’t even a real person; she was a fascinating character created by Norma Jeane Baker, the little girl who dreamed of becoming a movie star.

Born on June 1, 1926, Norma Jeane was the daughter of Gladys Baker and Charles Stanley Gifford, a colleague at the film laboratory where Gladys worked. Gladys Baker was a complicated woman. Married twice before, she was alone by the time she gave birth to Norma Jeane, and although determined to look after her new child, it was by no means easy. A single mother was frowned upon by society. Struggling with the pressure, just two weeks after giving birth Gladys took Norma Jeane to the home of Ida and Wayne Bolender, neighbours of her mother, Della Monroe.

Marilyn Monroe as a baby with her mum, Gladys

For almost seven years Norma Jeane lived with the Bolenders, who cared deeply for her and wanted to adopt her. Gladys was appalled by this, as she had already lost two children when her first husband took them out of state after their divorce. She was determined to never go through that again. By 1933 Gladys decided to move Norma Jeane into a house she was sharing with Mr and Mrs Atkinson, an English couple who worked in the movies.

Read: Monroe As The Face Of Chanel

From that moment on, Norma Jeane’s life became a maze of insecurities and confusion. Shortly after moving in together, news came through that Gladys’ grandfather Tilford Hogan had committed suicide, and her son Robert had been tragically killed. Gladys had always been emotional and these two events were enough to push her over the edge. “Why couldn’t it have been you?” she screamed at her bewildered child. Shortly afterwards Gladys suffered a nervous breakdown that sent her in and out of institutions for the rest of her life.

For Norma Jeane, her mother’s disappearance was more than she could bear. She was sexually assaulted by a new lodger in the home, and to make things worse, nobody would tell her what had happened to her mother. She came to believe that Gladys had died; a belief that became even more profound when her new guardian (and Gladys’ best friend), Grace Goddard, packed the child’s bags and took her to the Los Angeles Orphans Home, where she lived for the next year.

With her husband Arthur Miller

A series of foster homes followed; most notably with Ana Lower, Grace Goddard’s aunt, who became one of the most influential people in Norma Jeane’s life. ‘Aunt’ Ana, as she was affectionately called, was eager to care for the energetic youngster, yet her health wasn’t up to it, so Norma Jeane was, again, transferred to another foster home.

Finally in 1942, when faced with yet another stint in an orphanage, Norma Jeane married Jim Dougherty, a neighbour of the Goddard family, where she was living at the time. The couple had been occasionally dating when it was discovered that Norma Jeane’s foster family were moving east and needed someone to care for their charge. Grace discussed the matter with Jim Dougherty’s mother and together they approached the couple with the idea of marriage.

For Jim, it was a chance to ‘save’ her; he could be a knight in shining armour and he embraced the challenge wholeheartedly, though Norma Jeane was conflicted. She wanted to be kept out of the orphanage, but marriage? It wasn’t something that crossed her mind. “It was like being retired to a zoo,” she later said.

The marriage lasted four years, during which time Jim went to war and Norma Jeane moved in with her in-laws. She was bored and lonely, so took a job at a defence plant, where she was discovered by a photographer taking photos for the war effort. These photographs led to a modelling career and she left the defence plant job as soon as she could. Jim went along with it, though assured his wife that when he returned from war, she’d have to give it all up and start a family. She responded by heading to Las Vegas and filing for divorce; much to the shock and despair of her husband.

Whilst in Las Vegas, the young model met fellow resident Bill Pursel, and the two became firm friends, travelling around the area together; dining in local restaurants and enjoying each other’s company. During one outing, Bill was intrigued by the attention she was receiving from groups of girls and was surprised to discover that his new friend was a model, and a popular one at that.

Indeed, she was so well-known from magazine covers, that by the time Norma Jeane returned to Los Angeles, she was invited to a screen test at Twentieth Century Fox. As a result she was signed to a contract, but was disappointed to learn she would have to change her name to Marilyn Monroe. She didn’t mind that they wanted to change her last name to Monroe, but Marilyn? She had no idea how to spell it, she later told friends.

But whatever she thought of the name, from now on she was Marilyn Monroe. However, her career stalled on several occasions, with un-renewed contracts and a role in Scudda Hoo Scudda Hay which ended up on the cutting room floor. Fortunately, however, she was finally noticed by powerful agent Johnny Hyde, who put her forward for the small but important role of Angela in The Asphalt Jungle. The two became lovers, though any rumours that Marilyn became involved with the ageing man for his money were completely unfounded. Indeed, Hyde asked her many times to marry him and she turned him down each and every time.

After Johnny Hyde’s death, Marilyn channelled everything into her career, earning roles in films such as Love Nest, Clash By Night and Don’t Bother To Knock. Her star was on the rise, and yet it all threatened to come crashing down with the discovery not only that she had posed nude, but that her mother, whom she had been declaring dead for years, was actually alive and living in an institution. These revelations almost spelled the end of her career, but Marilyn took a deep breath and decided to tell the truth. She claimed she had done the nude photos because she was broke and needed the money. As for her mother, well she wanted to keep her whereabouts a secret to protect Gladys, not herself. The public appreciated her honesty and she continued to rise.

In 1952, Marilyn met and fell in love with retired baseball player Joe DiMaggio. In the years that followed, she starred in a variety of high profile movies, such as Niagara and Gentlemen Prefer Blondes, but by the end of 1953 she was frustrated. Marilyn wanted better roles and when asked to report to the studio for a part she particularly disliked; retaliated by fleeing to San Francisco and marrying Joe DiMaggio. The studio put her on suspension, though this was eventually lifted and she went on to make There’s No Business Like Show Business and The Seven Year Itch in 1954.

Unfortunately, it was her role in the latter film that became the unravelling of her marriage. When shooting the publicity scene which showed her skirt blowing up around her waist a furious Joe was in the audience and didn’t take kindly to photographers and onlookers gawking at his wife. A violent, highly-charged argument followed which was upsetting enough for Marilyn to call a halt on the marriage and file for divorce.

Newly separated, 1955 was a year of great personal soul searching for Marilyn. She moved to New York, set up her own film company with photographer Milton Greene, and began acting lessons and psychoanalysis. She regularly attended the theatre and was often found talking back stage to great actors and actresses. She also started to date playwright Arthur Miller, who she later married in 1956.

Read: Iconic Women Of The Century

Nicknamed the Egghead and the Hourglass, the couple arrived in London in July 1956, to film The Prince And The Showgirl with Laurence Olivier. However, it wasn’t a happy time for anyone involved and made even more devastating for Marilyn when she discovered Arthur’s notebook, detailing how he felt let down by his new wife.

The couple returned to New York where they tried to settle down to a normal life. Unfortunately, for Marilyn this meant several miscarriages – one in 1957, and another during the making of the highly successful film, Some Like It Hot. She then endured several failed operations in an attempt to become a mother, and after the last surgery in 1959, the doctor informed her it was not successful. “I already know,” she told the doctor before he could even break the news. From then on, she gave up on her attempts to become a mother.

Her relationship with Miller eventually broke down after he wrote the part of Roslyn for her in The Misfits, co-starring Clark Gable. The film was too raw; the portrayal too personal and by the time it was finished, Marilyn was once again facing life alone.

The next few years were a series of depressing lows. The lowest, perhaps, when Clark Gable’s widow allegedly blamed Marilyn for Gable’s death – he passed away just days after filming The Misfits. Marilyn felt suicidal and agreed to check into a hospital for rest. Unfortunately she had no idea she would be wrongly entering a ward for seriously disturbed patients. Only the arrival of Joe DiMaggio secured her release, after he threatened to take the hospital apart “brick by brick” if they refused to release her.

In the year that followed, Joe became the friend that Marilyn always dreamed of, and together they visited Florida, relaxed on the beach and attended baseball games together. Newspapers hinted at a reunion, but Marilyn assured them otherwise. Was it the truth? We’ll never know, as during the night of August 4/5, 1962, Marilyn was found dead; the victim of an apparent overdose.

Many theories have been brought forward over the years as to why or how Marilyn died. Some say it was because of her involvement with the President of the United States, though this has never been proved and indeed any actual relationship remains to this day an unfounded rumour. All we really know is that she sang for him on his birthday, and was friends with his sister – hardly the basis of an affair.

The truth is that we will never know how Marilyn Monroe passed away. She took her secrets to the grave, and any stories of her death that have come and gone through the years can only be speculative at best.

But perhaps in the end it really doesn’t matter if we never find out, as the appeal of her life is so much more captivating. All Norma Jeane Baker ever wanted to be was loved, so perhaps by concentrating on her life, rather than her death, it is the best way we have of showing her just how much she meant, and just how much the world lost when she slipped quietly from its grasp.