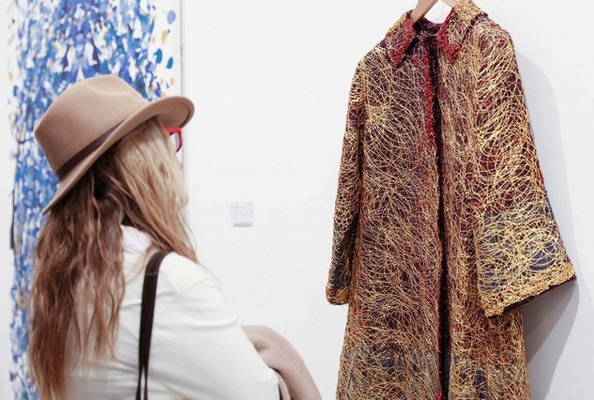 When it comes to cover-ups, this one’s pretty costly… however it’s all for a great cause.

A jacket belonging to Sheikha Jawaher bint Mohammed Al Qasimi has just sold for a whopping Dhs440,000 (£100,000) at a charity auction in London.

The garment went under the hammer in aid of the Jeans for Refugees (JFR) charity, along with 100 pairs of jeans donated by world celebrities.

The wife of Sheikh Sultan bin Mohammed Al Qasimi, Ruler of Sharjah, wore the design during a visit to the Zaatari Refugee Camp in Jordan in 2014.

The gold-threaded jacket actually scored the highest bid for a single item on the night – and was snapped up by the Sharjah Chamber of Commerce and Industry.

Read:
Sheikh Mohammed Delights His Mini Me With A Surprise Visit
Kenzo x H&M: The Inspiration And The Pieces To Buy
Bowled Over By The UAE: Paule Ka’s Creative Director Shares Her Travel Diary
8 Times Sheikh Mohammed & Princess Haya Gave Us Family Goals

Sheikha Jawahe first donated the jacket for a display at the British capital’s Saatchi Gallery last month, before it went to auction.

It was redesigned by US fashion designer Johnny Dar, the founder of JFR, who also hand-painted all the jeans donated ahead of the auction.

Stairway to #Paradise – Join the #dreamfighters holding it down for #humanity. Be part of restoring the dignity of #refugees and participate in #JeansForRefugees – 2 days left to bid for your favorite #jeans @ catawiki.com/jeansforrefugees #Bidforfreedom #LivetoLove #ArtForChange ❤️👖🌈🌎🙏🏻

Prior to the bidding, Sheikha Jawahe urged the public to dig deep and support the initiative.

“Conflict and strife across the world has encouraged people to launch humanitarian initiatives that support communities affected by them and help them overcome the obstacles and challenges that threaten their lives, such as forced displacement,” said the royal according to WAM.

“One global humanitarian initiative is Jeans for Refugees, whose organisers have sought to rally support for displaced persons through art. We highly appreciate and support this initiative, which will have a positive impact on the lives of thousands of refugees in different parts of the world.”

All proceeds from the auction will go to the International Rescue Committee, which works to improves the lives of thousands of young girls and women living in refugee camps.