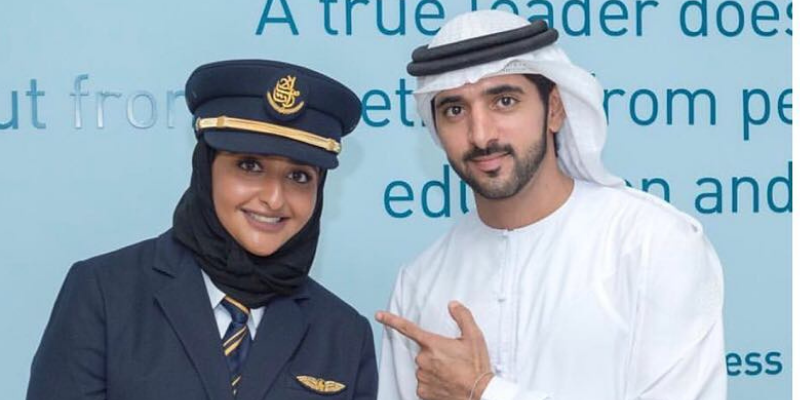 Both on duty and off duty, our November 2020 cover star has made a mark in the aviation industry. As a First Lieutenant Pilot at Dubai Police, she continues to serve the UAE with the utmost dedication.

“Serving my country by doing what I love doing most is simply the best feeling, and I am deeply grateful for it,” she previously told Emirates Woman.

From being the youngest student at the Oxford Aviation Academy to being the first Emirati royal qualified as a commercial pilot for Emirates Airlines, Her Highness truly believes that one’s altitude is only limited by their attitude.

By continuing to be a notable figure in the public eye, we’ve highlighted all her impressive on-duty moments captured on camera.

Celebrating the work of Dubai Police

Inspiring women to constantly reach new heights, Her Highness broke down barriers by becoming the first-ever Emirati woman to join the Dubai Police force as a helicopter pilot in 2020. Then, two years later in March 2022, Sheikha Mozah shared her pride at being a part of the Dubai Police team on an official visit to their exhibition at Expo 2020 Dubai.

Sharing a series of photos, Her Highness met with a number of fellow officers. “The strength of our country comes from its unity As one we rise! I am so proud to be part of the most incredible team at Dubai Police Airwing,” she said of the visit. “Together nothing is impossible.”

To mark the UAE’s milestone 50th anniversary, a special celebration was held by the Ministry of Health and Prevention which Her Highness attended. Dressed in her uniform, Sheikha Mozah is seen giving a salute to the country in photos she shared on her Instagram page.

As an inspiration to many for breaking down barriers, Sheikha Mozah was invited to be a keynote speaker at The Flying Society at the Italian Pavilion at Expo 2020 Dubai back in January 2022.  The prestigious event was organised by the Italian Aerospace and Defense company Leonardo. During her speech, she encouraged Emirati women that there is a space for them in the aviation sector and that there is no greater pride than serving their country.

In January 2021, Sheikha Mozah completed her first-ever solo flight in the USA. Sharing a picture that speaks a thousand words, Her Highness admitted she felt a “major rush of adrenaline and excitement”.

Of her first solo success, she said: “Then the aircraft finally lifted off the ground. What I felt is difficult to describe. Alone, in the sky… I finally did it!”

Breaking down barriers in a male-dominated field, Sheikha Mozah regularly showcases exactly what she’s capable of. In April last year, the helicopter pilot shared a spectacular video of herself flying over the iconic Burj Khalifa. “The sky is only the beginning,” she said in the caption.

A personal congratulations from Sheikh Hamdan

Dubai’s Crown Prince, His Highness Sheikh Hamdan bin Mohammed Al Maktoum, previously shared an image of himself and his cousin Sheikha Mozah on his Instagram account to congratulate her for becoming the first member of the royal family to fly as a qualified commercial pilot for Emirates Airlines.